Unitarian Leader to Speak on Hopes for Obama Administration 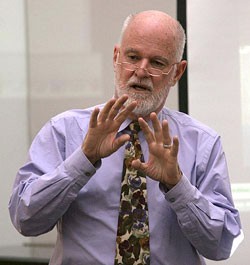 Clements, 63, is president and CEO of the Unitarian Universalist Service Committee. The organization, based in Cambridge, Mass., advocates for social justice and global human rights. According to Clements, the UUSC’s criticism of the “War on Terror” has made it “an enemy of the state” in the eyes of the Bush administration.

Clements has been a human-rights activist since 1970, when he left the U.S. Air Force after refusing to fly combat missions in Cambodia during the Vietnam War. His transformation from warrior to activist was chronicled in his 1985 book, Witness to War. A film version won an Academy Award for best documentary short subject.

Clements, a former president of Physicians for Human Rights, is cautiously optimistic about an Obama administration. While Obama’s policies promise to be a vast improvement over Bush’s, he says, the UUSC will pressure the new president to follow through on his stated commitment to social justice and human rights.

This Sunday, at Burlington’s First Unitarian Universalist Society, Clements will talk about what he calls the “enormous” hope that an Obama presidency represents for the world. He spoke with Seven Days late last week while traveling through Tennessee on his way home to Cambridge.

CHARLIE CLEMENTS: I don’t think an American president has been greeted with this kind of enthusiasm since John F. Kennedy. We work in about 25 countries around the world, so we’ve been speaking to ordinary people in the places where we work. The hopes for America returning to the so-called “community of civilized nations” . . . are just extraordinary.

CC: [Obama] said that genocide is a “stain” on this country, and that we can’t stand by and let it happen. So I do think that President-elect Obama is going to enter the international stage with a lot of support from international leaders, whom I think he can mobilize . . . I think it’s been very difficult for president Bush, bogged down the way he is in Iraq without the support of international leaders, to assert moral authority of any kind.

CC: I was heartened, in the “60 Minutes” interview recently, when he said that, very quickly after entering the White House, he would sit down with the Joint Chiefs of Staff and his national security staff and begin planning the draw downs.

So I think he’s serious about this, and I think [his plan] is more consistent with what the Iraqis want than what President Bush and Vice President Cheney had been striving toward. It’s very hopeful for those of us who feel this war can be ended.

CC: Well, I think that he has a set of priorities . . . He made it clear that within a short time of entering the White House he would close Guantánamo, he would write an executive order ending torture . . . I think those other policies related to homeland security and the Patriot Act will be reviewed over time.

But I think the economic crisis will occupy a lot of his time and, you know, he was not elected with a huge mandate . . . I think that’s why he is sending gestures that he intends to build bridges with the Republicans.

I’m confident that he will address many of these issues. Whether he’ll go as far as we’d like, I think, remains to be seen.

CC: There has been a blurring of church and state in the last years that I personally find, and I think most Unitarian Universalists find, fairly disturbing . . . You have the right pressing for more dissolution of this barrier between church and state, and what the Bush administration has done in terms of encouraging churches to be vehicles for public welfare initiatives.

Obama has not been terribly clear about this. There will be a huge backlash if he does curtail those initiatives, but, if nothing else, he’ll make sure that money does not get distributed in the same manner that it was under the Bush/Cheney administration.

I will be amongst those to push the Obama administration to further clarify this line between church and state that has been blurred and move more towards separation compared to what we have now. But I think the statements he has made have not clearly defined what his policies will be.

CC: I don’t think we have bottomed out [economically] . . . so Obama has a little more margin than Roosevelt did. But the hopes that people are putting in Obama’s basket, which are just enormous around the world and, domestically, probably do compare in some way.

Americans are crying for someone to reassure them, and they haven’t been getting that from the White House lately . . . The magnitude of [challenges] Obama faces is not yet what Roosevelt faced, but if we don’t act, they could be similar.

CC: I think in many ways that Vermont models a lot of behavior that we probably need in the rest of the country . . . about the civil nature of political debate. I think Senator Leahy has been very important in the leadership he has provided. I think the rest of us around the country are grateful for the kind of leadership that you’ve provided up there. Bernie Sanders has provided a lot of that as well.

CC: You know, when I returned from El Salvador in 1983, I was driven pell-mell after I landed in Boston to a town meeting up in Brattleboro, where the issue of the war in El Salvador was being debated.

The ambassador from El Salvador had been invited to this town meeting. I was brought up there by people who opposed the war . . . It was a snowy day, and we drove like crazy to get there. I was able to confront him on the lies he was saying in a credible way. It was, I have to say, one of the very important moments in my life . . . I wish more of America had that custom.