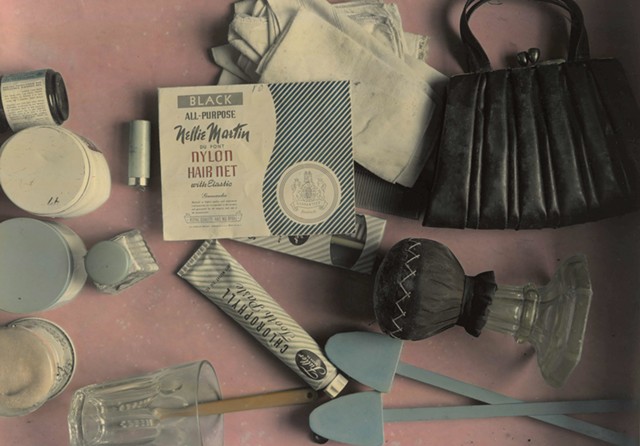 Some mysteries are the stuff of tabloids: flashy, sensational, shot through with sinister insinuation. Others are quieter, slower, devoid of any of the disruption we associate with modern-day scandal. A newly opened exhibition at Middlebury's Vermont Folklife Center qualifies, in some ways, as the latter. "Up Home: Hand-Colored Photographs by Susanne and Neil Rappaport" offers meticulously painted, large-format photographs taken in the home of Pawlet widow Minnie Griswold — three decades after her death.

When Griswold died in 1952, her sons, Charlie and Paul, could have held an estate sale or divided her property among family. Instead, they made a less conventional choice: They shut the door of her house and locked it, leaving their mother's belongings as they were.

Years later, in the 1980s, photographer and Bennington College professor Neil Rappaport photographed Charlie and his wife, Bea, in front of Minnie's shuttered house. The portrait was part of the Pawlet Visual Census and Oral History Project, an ongoing study undertaken by Neil and his wife, Susanne. (Much of this work can be found in their volume Messages From a Small Town: Photographs Inside Pawlet, Vermont.)

After that shoot, Charlie invited Neil inside. What Neil encountered there forms the basis of "Up Home": scenes that, after receiving Charlie's blessing, took the photographer about a month to document and another year for Susanne to color.

The nearly 40 images on view are exquisite. The degree of detail that Neil was able to capture on large-format film evokes that of an autopsy. He frequently trained his lens on highly textured arrangements, such as a silverware drawer or the pages of Griswold's botanical specimen book. The interior shots have a peering quality; many of the images are framed so that viewers can look through hallways into other rooms.

Both Rappaports died rather abruptly from cancer: Neil in 1998, Susanne in 2015. The photographs in "Up Home," as well as their house, fell into the care of Eileen Travell, a senior photographer at New York's Metropolitan Museum of Art who had studied with Neil in the 1980s.

Travell asserted that the high levels of radon detected at the Rappaport home, and in Pawlet generally, led to the couple's deaths. "I know more people who've died of cancer in that town than I do in Manhattan," Travell said by phone.

She was in her twenties in 1986 when she first saw the Griswold photographs. "I just fell in love with them then," Travell remembered. "You were just drawn in, like opening a drawer to the past." She added, "I'm 52 now, and I feel the same way when I look at the pictures now as I did then."

According to Travell, Neil enlisted Susanne's help to better capture the colors of Griswold's home. "He realized he wasn't getting the aura of it," she said. So Susanne, a dancer and artist, would take her husband's images back to Minnie's house to hand-color the scenes as she saw them.

"[Susanne] said it was one of the most spiritual experiences of her life," Travell noted.

For Ned Castle, director and media producer of VFC's Vision and Voices Gallery, the "Up Home" images have a specific value in addition to their aesthetic and historical merits: as provocateurs within the genre of documentary.

Castle pointed out that unanswered questions exist within the photos. Why, for example, was a Boy Scouts calendar turned to September 1966, when Minnie died in 1952? And shouldn't the kitchen have been dustier?

"I think Charlie and his brother may have gone in and cleaned the home periodically," Castle observed. Both brothers are now deceased.

Additionally, to take the photographs and, later, to color them, Neil and Susanne had to rearrange some objects, according to exhibition text. The points of interference, then, could be numerous.

"There are a lot of questions," Castle said, "and the idea that we're really excited about it is that [the exhibition] challenges the notion of an untouched space or the objective documentary."

The allure of "Up Home" is constructed in layers: first, with the Griswold sons' odd, if reverent, act of preservation; second, with the unknown manipulations inside the home over the years; and, finally, with the Rappaports' unique, painstaking efforts to collaboratively document the household of a woman who had died 30 years earlier.

"There's a mystery about [the images]," said Travell. "I think that's what we do as photographers — transcend this life and bring us into different dimensions." Of "Up Home," she said, "it's a time-travel piece, really."

The original print version of this article was headlined "In 'Up Home,' Hand-Colored Images Document a Household Frozen in Time"