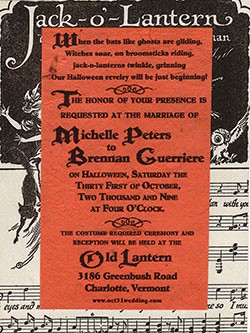 Committing to another person — for life — can be pretty scary. But Brennan Guerriere and Michelle Peters figure they’ve got the fright stuff. And that’s not a typo: The couple are getting married this Saturday dressed as Frankenstein and, of course, the Bride of Frankenstein. Peters’ father will walk her down the aisle in the guise of Dr. Frankenstein. The other family members are keeping their outfits a secret until the big day.

Guerriere, 28, works for the video production company 2much Media in North Ferrisburgh (that would explain the “trailer” on the wedding website). Peters, 30, is a distributor for Peregrine Outfitters. Both plan to wear traditional wedding garb and be Frankensteins “from the neck up,” says Guerriere, who notes the rehearsal dinner will double as a pumpkin-carving party. The “sort of pagan” ceremony on Saturday will include a “unity jack-o’-lantern”; the other decorations are “some paper lanterns and a cobweb or two.” The Old Lantern, Guerriere opines, doesn’t need much more than that. Especially with 145 guests showing up in all manner of freaky fashions.