At the beginning of a video posted online last month, "James," a plaid-wearing thirty-something with a five o'clock shadow, turns to his companion and asks, "What you got there, E?" Next to him on a couch, "Elizabeth" stares intently at a paper map.

"I am designing an escape plan for Thunder Gov Phil and Mayor Miro," she says.

James raises an eyebrow skeptically and looks at the camera.

"Well, maybe they should have thought of that before they started flaunting [sic] the law," James replies.

The exchange is a typical dig at Republican Scott by an anonymously funded online media brand, News Done Right. Also known as Fan Club, its yearlong series of videos, tweets and Facebook posts has recently taken on other Vermont politicians, as well.

While the videos are billed as political satire from a conservative viewpoint, they have prompted a complaint to the Vermont Attorney General's Office that they constitute "electioneering communications" — meaning the makers should be required to disclose who is paying to distribute the videos and other News Done Right material as sponsored content on YouTube and Facebook.

A spokesperson for Attorney General T.J. Donovan confirmed that the office is reviewing the complaint but declined to say whether there would be a formal investigation.

News Done Right launched in March 2017 as the Phil Scott Fan Club, and its two hosts repeatedly characterize Scott as hopelessly liberal. After Scott recently announced support for new gun-control measures, for example, News Done Right took to Facebook and posted a mock certificate purporting to "certify" Scott as a "full-fledged Democrat." Another episode ridiculed Scott's approval of marijuana legalization with a video that portrayed him and his chief of staff, Jason Gibbs, as pot dealers. News Done Right hosts irreverently call Scott "Thunder Gov," a reference to his auto racing at Thunder Road Speedbowl in Barre.

At times, James and Elizabeth — the duo reveal no last names, though emails sent from their Gmail account identify the sender as "James Hunter"— have made straight-faced misstatements of fact. Last June, Elizabeth said Scott had a plan to pass "his" carbon tax, though Scott strongly opposes such a tax. In a November episode, James declared that Scott has "banned Columbus Day." In fact, Scott declared October 9, 2017, Indigenous Peoples' Day in Vermont but did not "ban" anything.

As News Done Right's brand shifted from Phil Scott Fan Club, its hosts turned their attention to Sen. Bernie Sanders (I-Vt.). In one video, James claims that a brain scan of Vermont's junior senator showed that "80 percent of Bernie's cognitive matrix is filled with ways to try and get other people to pay for his stuff." The other 20 percent, James explains, is "full of ways to try and hide financial documents from federal election commissions ... try and defraud banks with your wife, and, oh — latex fetish."

The video series also pokes fun at Vermont's high cost of living and progressive politics. "You know how they say Vermont will lose half its population once ... progressives get their carbon tax?" Elizabeth asks James in a video posted last month. She offers a solution: "800,000 illegal aliens" should be relocated to Vermont, where they could be employed installing solar panels.

While James and Elizabeth claim to live in and tape their videos in Vermont — and have even casually displayed a print copy of Seven Days as apparent bona fides — the two turned down repeated email requests for in-person interviews and last week declined to speak on the telephone.

The only person who professed to Seven Days any knowledge of News Done Right's operations is Bradford Broyles, a former Rutland County Republican Party chair and filmmaker who splits his time between Los Angeles and Vermont. Broyles said in December that he knew people involved with News Done Right. "I know about it and I've seen it, and that's all I'm gonna say," Broyles said then. "I'm a 'no comment' on it." Broyles did not respond to further inquiries last week.

As late as June 27, 2017, the domain name — newsdoneright.com — was registered to Howard Wall, director of the John W. Hammond Institute for Free Enterprise at Lindenwood University in St. Charles, Mo., where he is a professor of economics. According to a Whois report about the domain obtained in December — which includes information about who has paid to register a web address — the website was registered to Wall's name and home address as of the June date. There is no evidence that Lindenwood is connected to News Done Right. More recent reports show the owner is using a privacy feature to conceal his or her identity.

In an email exchange with this reporter, Wall said he sold the domain "months ago" and knows nothing about News Done Right. He declined to identify the buyer. Asked why his name was still listed as the owner in December, he responded: "No, I was not [the owner] ... Your information is incorrect. Go fuck yourself."

His take? "Not funny, was, I think, the big one," he said. Schlak, 27, lives in Burlington and works at the University of Vermont. He said the videos were full of false accusations and half-truths.

"They just would make stuff up," Schlak said. "So my initial reaction was just kind of offense, as somebody who appreciates comedy and politics. It was just weird. They were aggressive and insulting and deceitful."

When another Reddit user shared a video of James and Elizabeth with one of the site's larger "Subreddit" communities, one of its 700,000-plus members posted a "fun fact" in response. "This girl's name is Rachel Alig, and she gets naked in a movie called Bikini Spring Break," wrote a user going by Stezmyster. Indeed, actress Rachel Alig's online photos and video clips bear a striking resemblance to Elizabeth.

According to multiple social media profiles using Alig's name and photograph, she is an actress who lives in Los Angeles. Her IMDb page shows she's been in 73 productions, including commercials, horror movies and a feature-length comedy called Last Call at Murray's. Alig's Twitter, Instagram and Facebook profiles portray the life of a 30-year-old actress trying to make it in LA. According to a LinkedIn profile in her name, she worked as a reporter at WTOK-TV in Meridian, Miss., from 2009 to 2010.

Her social media accounts make no references to News Done Right, and attempts to reach Alig for this story were unsuccessful.

Asked about Alig, Elizabeth responded from an email address that News Done Right posted on Twitter: "A lot of people look like a lot of people. I prefer to think I look more like Gal Gadot, minus the French accent of course," the email said, referring to the actress who stars in Wonder Woman and who is, in fact, Israeli.

Schlak said he sees the videos as more worrisome than entertaining. Besides not being funny, he said, the News Done Right effort reminds him of a hometown version of the Russian election-meddling allegations.

"When it's your state and your town, and they're talking about your politicians, it felt personal. It felt scary in the way that the larger story unfolding didn't," Schlak said.

After Reddit users spent the better part of a year trying to figure out who's behind News Done Right, UVM graduate student Caleb Goossen filed a formal complaint on March 1 with the Attorney General's Office.

"It seemed that they were trying to get involved with campaign discussions," Goossen said, "and any other time I've seen that from a paid advertisement, [it] has the really familiar 'paid for by' etc., etc. language at the end of it. And they clearly didn't."

Such communication must include information about who paid for it. News Done Right gives no hint as to who is funding it. Goossen said that regardless of the political views they are pushing, that feels wrong.

Will Senning, the director of elections and campaign finance for the Vermont Secretary of State's Office, said there's not much legal wiggle room.

"The law is really clear: If it is an electioneering communication, it requires the 'paid for by' — the disclosure language," he said.

Senning didn't offer an opinion about whether News Done Right is violating the law — that's the job of the attorney general, he said — but he added that the videos clearly identify Gov. Scott and cast him in a negative light, "so I think you can check that box."

Under campaign finance law, Scott qualifies as a candidate even though he hasn't announced a bid for reelection because he's received and spent more than $500 in contributions during the current election cycle.

Rebecca Kelley, spokesperson for Scott, said the administration hasn't really noticed News Done Right and that, if anything, the content reinforces Scott's image as a governor who puts Vermonters' needs ahead of partisan politics.

"However, if someone is spending a lot of money to try to influence the political outcome in Vermont, that's something the attorney general and secretary of state would no doubt look at closely, if they thought there was a potential violation of campaign finance or electioneering laws," Kelley said in an emailed statement.

"But there's no reason to think it's going to stop there," he said. "If we start to see this money coming in with no accountability, that's bad for democracy." 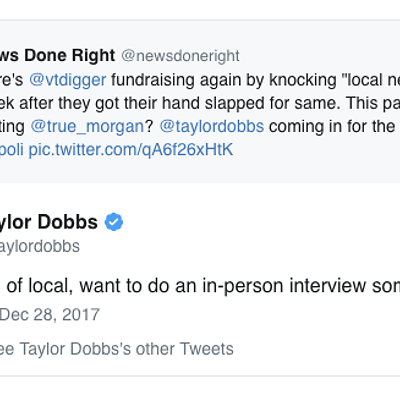 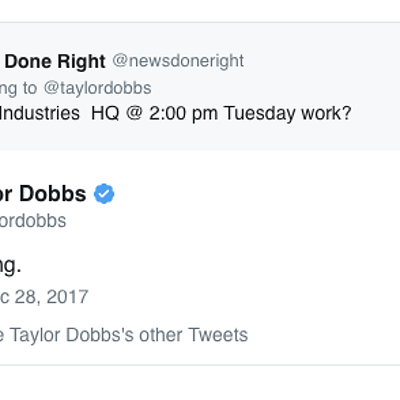 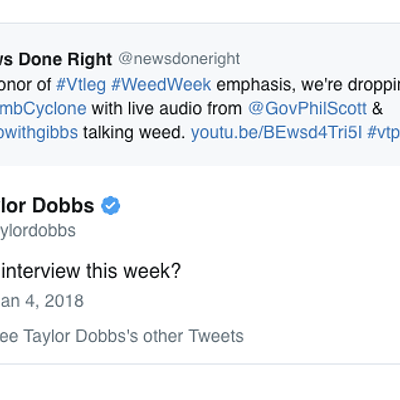 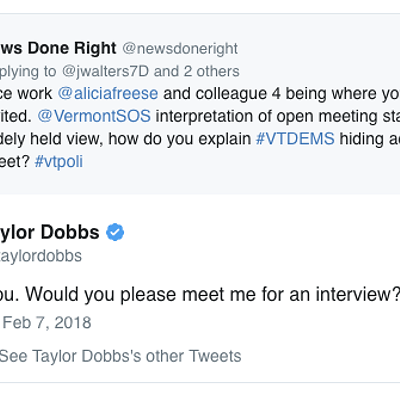 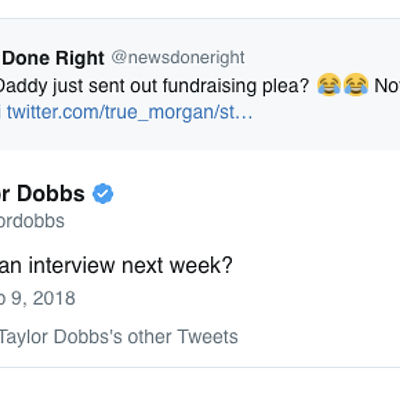 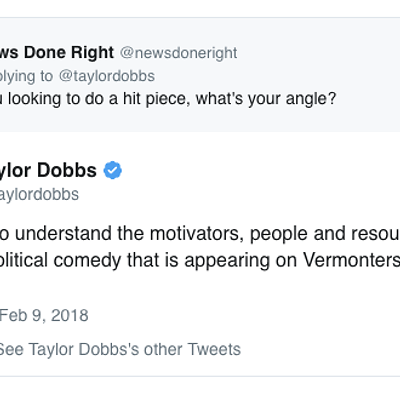 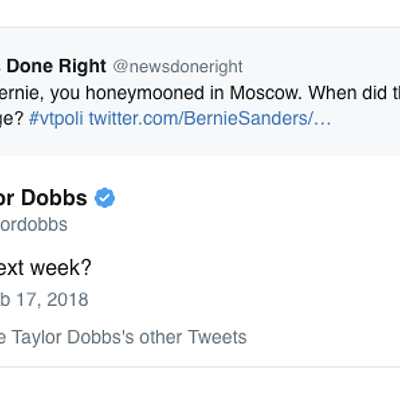 News Done Right Interview Requests
Click to View 15 slides
Correction, March 16, 2018: A previous version of this story misstated the last known date that the News Done Right domain name was registered to Howard Wall. It was June 26, 2017, according to a WhoIs report.