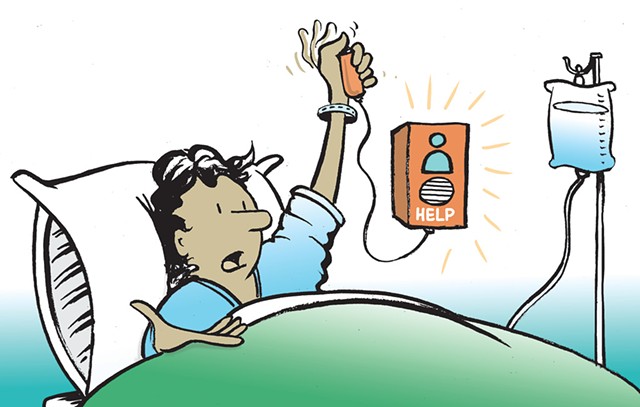 What's all this talk we hear about systemic racism? In progressive, chill Vermont, such a thing couldn't be a problem. Well, OK, maybe racial bigotry pops up occasionally in web comments or the remarks of unenlightened people. But in a professional health care setting where you're talking with doctors and nurses, you'd never see or hear it, right?

Maria Mercedes Avila is devoting her career to combating the systemic biases that interfere with the delivery of good medicine to patients because of factors such as their race, sexual orientation or status as immigrants. A PhD who is an associate professor of pediatrics and an adjunct assistant professor of nursing at the University of Vermont and its Larner College of Medicine, Avila testified about her work one morning last week before the Vermont House Health Care Committee.

Avila wove together data from national studies of how the health care system interacts with historically marginalized people and her own experiences as a Latina immigrant who has lived in Vermont for nearly 20 years. In the latter category, she told a disturbing story of an experience she had while shopping for a car. She expected the particular vehicle she wanted would cost about $25,000 and figured she could swing it on her professor's salary.

"I go into the store. I said to the person, 'Can I please test-drive this specific car?'" she said. "And the salesperson didn't even invite me ... to sit in [the car]. He looked at me and said, 'You cannot afford it.'

"And I said, 'How can you possibly know that I cannot afford a car based on you looking at me without asking what I do for a living, without asking my income, without running my credit score?'"

The salesperson offered her a $10,000 car to test-drive. "And I said, 'Thank you very much. I'll go to another dealer,'" she recounted.

"Every human being in our society has biases and prejudices."Maria Mercedes Avila tweet this

"In 12 months of care that my mother had to receive due to serious, life-threatening health problems, there were at least 47 instances where we had to advocate for the provider to provide interpretation and translation services," she said. "Many times, this failure to follow federal and state laws [was] because the provider was not aware that they had to follow these laws."

"What is important is to be aware of what biases we have, so we can put them in check and don't expose communities to [a] substandard level of care, services, education, housing, employment," she continued.

Even if you think you understand the need for Vermont to welcome the growing diversity of its population, search YouTube and listen to the first two February 24 videos of the House Health Care Committee. Hear what Avila has to say. You'll learn some things. I sure did.

It looks like voting by mail may become permanent in Vermont. It got a big boost last year, when all voters were urged to fill out ballots at home so they wouldn't have to line up to vote on Election Day while trying to social distance.

"Bottom line is that people liked it. People liked it a lot," Deputy Secretary of State Chris Winters told the Senate Government Operations Committee recently. Vermonters showed it in November with a record turnout of nearly 371,000. More than three-quarters of them voted absentee, meaning they used mail ballots or voted early.

The committee obliged last week with a 4-1 vote for a bill that calls on the secretary of state to send ballots to all active registered voters before future statewide elections. Cities and towns would be allowed to use mail ballots for municipal elections on Town Meeting Day if they wished, as dozens of Vermont towns just did.

Sen. Jeanette White (D-Windham), chair of the committee, said in an interview that she prefers the term "mail-out ballots," since that's what the Secretary of State's Office would be doing. It would be up to individual voters to either mail them in, take them to a public drop box, ignore them and go to the polls to vote, or skip exercising their right to vote.

Some voters had trouble following instructions for how to fill out the ballots mailed to them last year. The law would grant voters an opportunity to "cure," or correct, ballots that they completed incorrectly, so that they are not discarded.

The measure is expected to draw strong support among majority Democrats in the legislature. Senate Minority Leader Randy Brock (R-Franklin) expressed some ambivalence about making universal mail voting permanent. While Republican-led state legislatures around the country push to make voting harder, based on the theory that GOP candidates do better when turnouts are lower, Brock said he doubts that formula applies in Vermont.

His party gained three seats in the House and one in the Senate in November. "We've talked about it in the Senate GOP caucus, and I think we have a degree of confidence that it actually helped Republicans," Brock said of voting by mail.

I'm going to stick with Brock for a bit here because the man has some serious credentials when it comes to detecting fraud. The Swanton resident is a former executive vice president for risk oversight at Fidelity Investments and a certified fraud examiner. He served a term as state auditor and, after losing the 2012 gubernatorial election to Peter Shumlin, launched his own study of voter fraud in Vermont.

Brock found some dead people still on the voter rolls, but none had risen from the grave to cast ballots. He found 22 people who had voted both in Vermont and in another state. "Most, but not all, of the duplicate voters were of college age or slightly older," he wrote in 2014. He said voter checklists did not appear to be up to date in many towns, citing a Burlington address where more people were registered to vote than could "fit in the building."

I asked Brock what he thought of two favorite security measures supported by Republicans who raise alarms about voter fraud. One requires that voters sign a document accompanying their ballot; election officials compare that signature to one they have on record. The other mandates that voters show identification. That would be tricky when voting by mail, and studies have shown that many poor and minority voters simply don't have IDs.

Signature matching is an intricate procedure that most election officials lack the training to do. "You'd have many false positives and false negatives," Brock said. As for checking IDs, he added, "The question is, do we have enough voter fraud to warrant that solution? My sense is, we probably don't. It's such a rare commodity."

It is possible to steal an election in America. The surest way is to raise the specter of fake votes until you can justify suppressing the ballots of marginalized people. Fortunately, Vermont lawmakers seem prepared to do the opposite and to make it easier, not harder, to exercise the right to vote.

Wilson Ring of the Associated Press' Vermont bureau, with help from AP reporters around New England, had a nifty piece this week about whether the COVID-19 pandemic would constitute a fatal or near-fatal blow to the venerable town meeting tradition in New England.

"The town meeting, for centuries, was a staple of New England life — but the coronavirus pandemic could accelerate the departure from the tradition where people gather to debate everything from the purchase of local road equipment to multimillion-dollar budgets to pressing social issues," Ring wrote.

Susan Clark, Middlesex town moderator and author of two books on town meeting, said she thinks and hopes the tradition will prevail.

This year, many Vermont towns switched to mailed ballots or delayed their meetings in hopes that vaccines would soon end the pandemic. While Middlesex opted for mailed ballots, Clark said she very much wants to stand before her neighbors and see them exercise their self-governance muscles next year.

Face-to-face, moderated debates are a crucial salve to what ails democracy, because they push people to be courteous and respectful, even when they disagree.

"This is a moment in our history where we're really polarized and we don't hear each other very well," Clark said. Town meeting "requires people to look beyond the caricatures and stereotypes and really see each other," she said.

Call it Svalbard syndrome. The Svalbard Global Seed Vault is a huge underground bunker on an island north of Norway where seeds from around the world are stored so that they could be regenerated after an apocalypse. I'm hoping town meeting survives somewhere in Vermont so that, if the need arises, it could do the same for democracy.

Correction, March 3, 2021: Maria Mercedes Avila is an associate professor of pediatrics. A previous version of this column contained an error.