I live in a Burlington neighborhood where uniform, lush lawns and manicured flower beds are standard. From a distance, my yard might pass muster. But up close, it's a mishmash of grass, violets, dandelions, mystery plants and bare patches. It also harbors a happy grub colony and becomes a dust bowl by midsummer.

After recent interactions with the Vermont Healthy Soils Coalition, however, I have a completely new way to think about my lawn — and the plight of the planet.

I've learned that healthy soil is key to a healthy lawn and is a complex ecosystem. Healthy soil sequesters more carbon and is better able to absorb heavy rainfall and to remain moist during droughts. What makes healthy soil so amazing? Tiny creatures invisible to the naked eye.

"There are millions of microorganisms in one teaspoon of healthy soil," said Cat Buxton, a compost consultant, soil health educator and cofounder of the coalition. Using a compound microscope at 400x magnification, she said, "you'd see bacteria, protozoa, nematodes, microarthropods and mycorrhizal fungi." These creatures feed on organic matter, creating humus that locks carbon in the soil, keeping it from escaping into the atmosphere.

Mycorrhizae spores are particularly important to soil and plant health because they attach to mineral particles on roots and grow mycelium, a network of filaments, that aerate the soil and boost plants' ability to take up water and nutrients from humus. While mycorrhizae can live on shallow roots, like those of Kentucky bluegrass commonly found in Vermont lawns, they do best under diverse plant species with roots of varying depths — from six inches to six feet — that provide multiple pathways for air and water.

"Eighty percent of land plants have mycorrhizal relationships," wrote Jess Rubin by email. She's an environmental scientist and the founder of Vermont's MycoEvolve, which provides "ecological restoration from the soil up" through research, education and ecological landscaping.

In Earth's 4.6 billion-year geologic history, "microbes showed up approximately 4 billion years ago, fungi 1.5 billion years ago and plants a half billion years ago," wrote Rubin. "Given this trajectory in evolution and succession, it makes sense that when we restore disturbed ecosystems, we partner with the original builders of the soil: microbes and fungi."

As these microorganisms go about their business, they produce what Buxton lovingly calls "the goo, glue, snot and slime that literally holds our landscapes together." These biotic glues stick to plant roots to form soil aggregates that are hydrophobic — water can move around and even into them, but it can't pull them apart. In heavy rain, the soil acts like a sponge, absorbing water and staying put rather than washing away. In drought, aggregates help the soil retain moisture for longer periods of time.

But these microorganisms "and the networks they are woven into," writes Rubin, are sensitive and fragile: They do best when not disturbed. Tilling, for example, exposes them to extreme changes in temperature and moisture, killing them and their nutrient-exchange networks rather quickly. As they die, they release the carbon they had sequestered, and the soil itself becomes unstable because aggregates are destroyed.

Wait — since when was tilling a bad idea? Organic farmers and gardeners have been doing it for years.

The study of soil microorganisms "is definitely a new field!" wrote Juan Alvez by email. The research associate at the University of Vermont Extension's Center for Sustainable Agriculture noted, "We are really good at classifying and categorizing things, but the 'treasure' is mainly in the realm of interrelations among microorganisms, their functions and processes."

OK, I'll definitely revisit my gardening practices, but what can I do to help my nearly half acre of turf-covered sandy soil in a sustainable way? Quite a lot, it turns out.

But before taking action, I decided to find out just what was in my soil — or wasn't. 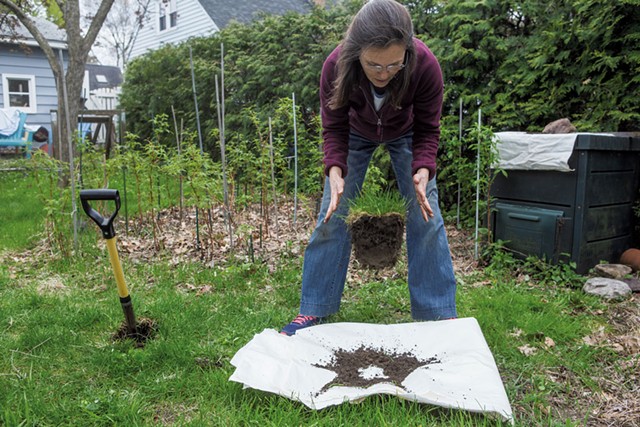 Soil tests exist for everything from texture and porosity to compaction and a tendency to pool water. I chose two easy ones, suggested by Buxton, that would provide baseline data for the soil amendments I had in mind.

The first was a soil stability test that detects the presence or absence of aggregates. I suspended mesh pouches in the top inch of two clear glass vases filled with water and gently filled each with a soil sample: one from the vegetable garden tilled annually, the other from a lawn-covered corner of the yard.

The garden soil immediately fell apart, making a beeline to the bottom of the vase. The annual disturbance had killed the microorganisms and destroyed the aggregates. By contrast, some of the yard soil drifted downward, but some remained intact in aggregates.

I was somewhat crushed to discover that my garden soil was crap but heartened to see that my lawn soil wasn't too bad. It met three of Buxton's five criteria for healthy soil: keep living roots in the soil, minimize soil disturbance and minimize bare soil. It would have been better had it met the other two criteria: maximize plant diversity and keep animals in contact with the soil.

The second soil test I performed was a simplified version of the visual assessment created by the Food and Agriculture Organization of the United Nations. I used a flat-bottomed shovel to cut a six-inch-square patch of turf that was about seven inches deep. Lifted out of the ground and placed on its side, the sample showed primarily grass roots three to four inches long, plus a few clover roots about six inches long.

I held the sample a foot and a half off the ground and dropped it a few times onto a piece of white cloth to see what would fall out. I was hoping for worms, centipedes and feathered webs of delicate mycelium. Nope. Just soil. One cautious worm poked its head out of the hole in the ground, but the test showed that I had minimal aggregates on the short roots of my nearly monocropped lawn.

I was totally ready to give my soil some TLC, but, according to Buxton, the best time for major improvements is early spring or early fall, when temperatures tend to be cooler and rainfall more common.

For now, I've begun walking around my yard with 1.5-inch cleats strapped onto my sneakers, punching holes in the turf. Aerating it monthly reduces soil compaction and brings more air and water to grass roots.

Assuming the weather cooperates, the new grasses and clover will grow deep into the soil, microorganisms will attach to their roots, and biotic glues will form oodles of aggregates that hold moisture and sink carbon.

Lawns for a Cooler Planet

I can't cool the planet or mitigate the next tropical storm by improving my small patch of soil. But if many more homeowners and turf managers followed suit, we could make a difference. In 2011, there were 40.5 million acres of turf on lawns, golf courses, parks and other areas in the conterminous U.S., according to a study by the International Society for Photogrammetry and Remote Sensing. The same study estimated that the acreage of lawn surpassed that of the eight most prevalent irrigated crops combined.

I've long felt overwhelmed by the job of reversing the climate crisis. But learning about microbial "Earth angels" has given me hope and purpose. Forget the perfect lawn. I'm all about the beauty of diversity and the thriving ecosystem below.

These steps are based primarily on a handout by Cat Buxton, cofounder of the Vermont Healthy Soils Coalition, and Mark MacKenzie, president of Appleseed Organic Lawn Care in Ontario. All of the items described can be found at local garden stores.

The original print version of this article was headlined "Earth Angels"