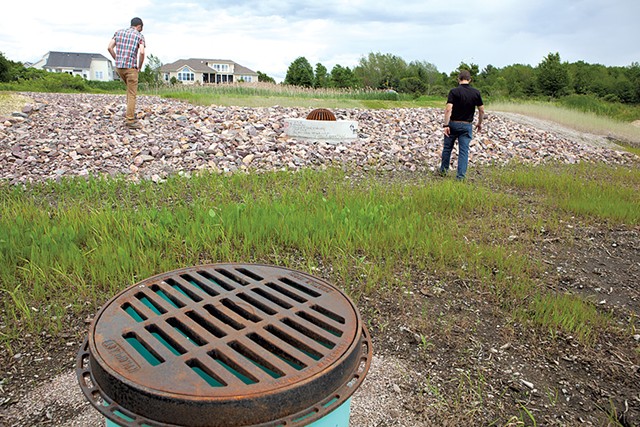 The Pinnacle at Spear neighborhood in South Burlington is named for its enviable spot atop a knoll overlooking Lake Champlain.

The 86 single-family homes in the 1990s-era subdivision off Spear Street lie in the headwaters of Bartlett Brook, which flows north, and Munroe Brook, which flows south. The property's developer installed a series of ponds to collect rainwater that would otherwise run off roofs and driveways and flush pollutants into the brooks.

There was just one problem — the ponds didn't really work.

Whether because of a design flaw, lack of maintenance or both, stormwater in most cases rushed in one side of the main pond and right out again.

The city's stormwater utility redesigned the ponds to better mimic the natural landscape. Now, new berms force the water to follow a more leisurely course, giving it time to percolate through soil and subterranean gravel pits that trap contaminants like phosphorus. That keeps pollutants out of the brooks and, ultimately, Lake Champlain.

In coming weeks, the owners of nearly 700 properties like Pinnacle at Spear with more than three acres of impervious surfaces — roofs, parking lots and roads — may find themselves facing similar sticker shock.

The State of Vermont is preparing to roll out some of the most aggressive stormwater regulations in the nation as it seeks more effective ways to reduce the stubborn pollution problems in Lake Champlain and Lake Memphremagog.

Instead of merely requiring developers to install modern stormwater-scrubbing features such as retention ponds, sand filters, rain gardens and gravel wetlands in their new projects, the state, after several years of delay, is wading into uncharted regulatory waters.

It's planning to require properties developed before 2002, when modern stormwater requirements went into effect, to retrofit them.

Big-box stores, malls, apartment buildings, hospitals, schools, parks, industrial buildings and homeowner associations may soon be on the hook for digging up their parking lots and adding the green features. The statewide rule will cover an estimated 5,700 acres of Vermont land in the Champlain and Memphremagog basins alone. Mitigation of those properties could cost more than $171 million over the next decade.

The state doesn't relish imposing such costly new requirements on property owners, but Agency of Natural Resources Secretary Julie Moore said it's necessary, given that developed land accounts for 20 percent of the phosphorus pollution in Vermont's largest lake.

"I'm not sure we have a choice, given our goals for Lake Champlain," Moore said. "Clearly, reducing the phosphorus load reaching the lake associated with stormwater from our developed lands is essential."

In Vermont, agriculture is by far the largest source of phosphorus, a pollutant that contributes to potentially toxic algae blooms and other water quality problems. Farms and dairies produce about 40 percent of the phosphorous that reaches Lake Champlain, according to the state. Dirt eroded from stream banks is second, at 22 percent. Developed lands, including paved and unpaved roads, are next at 20 percent. Forests contribute 15 percent, while wastewater treatment plants are responsible for 3 percent.

The new regulations are a long time coming. Vermont has struggled with how to clean up urban and suburban stormwater for more than two decades. Lawmakers included what is known as the three-acre rule in the state's Clean Water Act in 2015. The state missed a 2017 deadline to draft rules to implement the policy but finished the work in March 2019. More detailed property-specific guidelines were supposed to be in place by July 1, but the state has missed that target, too, said Padraic Monks, stormwater program manager in the Department of Environmental Conservation.

Property owners will be notified of their need to comply with the new regulations around July 15, Monks said. A public comment period and meeting will follow, after which the rules will have the force of law.

The state is finalizing the list of properties that will need work and wants to make sure staff is prepared for the deluge of questions likely to follow, Monks said.

"For those affected, it's a very big deal," he said.

The Conservation Law Foundation, which advocated for the new regulations, has been frustrated with the pace of the rollout but is pleased a milestone has finally been reached, said staff attorney Elena Mihaly.

"This is a really important step in implementing the big Lake Champlain cleanup plan," Mihaly said.

Business leaders are on board with doing their part to clean up the lake because they know how crucial water quality is to the health of the local economy, said Ernie Pomerleau, president and CEO of Burington-based Pomerleau Real Estate, one of the largest commercial real estate firm in the state.

But most property owners affected by the new rules will be blindsided, he said.

"This is going to be mind-boggling for the state to administer, mind-boggling in terms of the cost, and most people are not prepared or able to do any of this," Pomerleau said.

While such measures have been discussed in theory for years, many businesspeople and property owners don't pay close attention to pending regulations, he said. When faced with rules they view as unfair, many may choose to fight, Pomerleau said.

Other property owners might be more surprised to be listed, including a small residential subdivision in Rutland; golf courses like the Burlington Country Club; and state-owned properties, like Birdseye Wildlife Management Area outside Poultney and Little River State Park in Waterbury.

"I can't see any hazards from our property in terms of pollution or chemicals or anything along those lines," said Ted Hoehn, owner of Windridge Tennis & Sports Camps, whose 146-acre Roxbury property is listed as having just over four acres of impervious surfaces.

Hoehn said the camp has tennis courts, horseback riding facilities, pools and mountain-biking trails, but he's heard nothing about the new rules.

"We'll deal with it when it comes down our pike, I guess," Hoehn said.

Anticipating pushback, the state has given property owners lots of time to comply. Permits for projects in the Champlain and Memphremagog basins must be approved by 2023 and then will be given a 2028 deadline. Property owners in other parts of the state have been given until 2033.

The law provides a long "on-ramp" for compliance because the projects can be expensive and time-consuming, Mihaly said.

In many cases, however, stormwater retrofits are simply not feasible, Pomerleau said. In 2016, he ordered up a study to understand what the rules might cost him. It revealed something else, he said.

"I was just trying to figure out how much this was going to cost me, then I realized that some of this is not fixable," Pomerleau said.

When building a new shopping center today, he said, he can easily incorporate the required stormwater controls by directing water toward green space designed to absorb and treat it.

But retrofitting an existing retail center, especially in downtowns or other heavily developed areas, may mean ripping up parking spaces to install new underground treatment systems.

"Am I going to close down a major business for four months?" he said. "It ain't going to happen."

Instead of requiring individual property owners to design, permit and install their own systems, a more efficient solution may be to partner with a municipality to channel stormwater from multiple sites to a larger treatment area. That's what Pomerleau is hoping to do with an older shopping center he owns just north of St. Albans' downtown.

The city is open to the idea because it already is considering developing a large gravel wetland project to address its own stormwater discharge issues, said Chip Sawyer, director of planning and development for the city.

"If we could find a way that this treatment facility would take on some of the obligations of the three-acre sites, then perhaps we could form some kind of public-private partnership that just solves the problems for everybody," Sawyer said.

That's what the Pinnacle at Spear project pulled off. South Burlington's stormwater district designed and managed the project, partnered with the homeowners association, got some grant funding, and split the remaining costs between the city and homeowners, who are paying about $1,500 per home.

The city wasn't required to take responsibility for the neighborhood's water woes, but it was probably the best way to make sure the work got done right, DiPietro said.

DiPietro predicted that "some folks are going to rage against this new rule," but he hopes that collaboration, not finger-pointing, carries the day.

The law has significant flexibility built in to ensure that if a property owner has no technically feasible way to accomplish the work, there are financial options, explained Monks.

For example, property owners can pay offset fees of $25,000 per acre of impervious surface if they have no way of correcting their stormwater issues. The funds will be used to reduce stormwater pollution elsewhere.

But it's not going to be as easy as just writing a fat check to the state.

"You need to do as much as you can on your site, and if you can't do it, then you pay fees," Monk said.

Pomerleau worries that owners of properties where improvements are not financially or physically feasible will be barred from pursuing collaborative, commonsense solutions.

But the added complexity of such programs and the fact that some questions have yet to be answered shouldn't be used to justify further delay, she said.

"The state has done its best to create flexibility in the rules. Now it's time to start implementing them," she said.