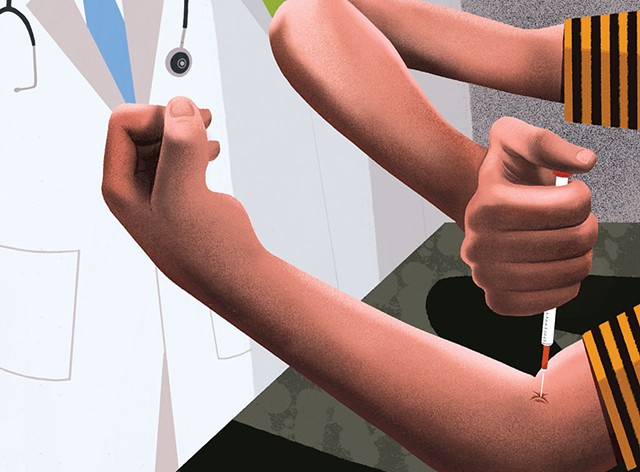 On a weekend morning 13 years ago, Jessica sat in her car in South Burlington's Staples Shopping Plaza and stuck a heroin-laden syringe in her right arm.

"In the euphoria that I was in, I could tell that it was too strong. I knew that I was about to overdose," she recalled. "I was afraid, in the back of the parking lot, that nobody would see me until it was too late, so I opened up my car door and just kind of spilled myself out."

By the time Jessica regained consciousness, a small group of people had gathered around the 19-year-old Burlington woman sprawled on the asphalt. An ambulance was on its way.

"I just freaked out, got in my car and peeled out of there," said Jessica, who declined to provide her last name because she is now in recovery and trying to build a new life. "I could have easily ended up dead. Easily."

As America's opiate crisis has swept across Vermont, such scenes have grown ever more common — in public bathrooms, parks and even cemeteries. That's prompted a new look at a controversial strategy to move heroin use from parked cars and locked houses to regulated facilities that provide medical care and access to treatment.

On Tuesday, Rep. Selene Colburn (P/D-Burlington) introduced legislation in the Vermont House to legalize "safer drug consumption programs" in the state. Better known as "supervised injection sites" in the nine countries and five dozen foreign cities in which they already exist, these facilities would provide venues for Vermonters to use "pre-obtained drugs" — e.g. those bought illegally — without fear of prosecution.

The sites would not be run by state government, but they would require a permit from the Department of Health. According to the legislation, clients would be supervised by "health care professionals or other trained staff," who would "monitor and treat potential overdoses."

Related Death by Drugs: Opiates Claimed a Record Number of Vermonters in 2016

Death by Drugs: Opiates Claimed a Record Number of Vermonters in 2016
By Mark Davis
Health Care

Colburn sees the idea as an "extension of the harm-reduction model" that started with needle-exchange programs in the 1980s and continued in recent years with the distribution of the overdose-reversing drug Narcan. Such programs put drug users in regular contact with social service workers who can steer them toward treatment.

"It feels like a natural build-out of some really important services that we have fought hard to put in place in Vermont," Colburn said.

Her bill makes Vermont the fourth state to consider legalizing supervised injection sites, according to Drug Policy Alliance senior staff attorney Lindsay LaSalle. Several U.S. cities, including Seattle, San Francisco, New York City and Ithaca, N.Y., are also exploring the concept. But, so far, the only such facility in North America is Vancouver's Insite, which was founded in 2003 to serve the Canadian city's drug-ravaged Downtown Eastside neighborhood.

In 2015, according to Insite, 6,532 individual drug users paid 263,713 visits to the state-funded center. One study showed a 30 percent increase in the use of detoxification services by its clients — and a corresponding rise in treatment initiation.

"It's an incredibly important, evidence-based intervention to deal with the crisis we're facing," said LaSalle, whose organization is lobbying for Colburn's legislation.

It's too soon to say how the bill will fare. Outside of Vermont, opponents of similar proposals have questioned whether supervised injection normalizes or even encourages drug use, though the research does not support those fears. It's also likely that some communities will recoil at the prospect of a local injection facility.

If Colburn's bill does become law, one logical host for such a site would be the Howard Center's Safe Recovery program. Founded 16 years ago as the Green Mountain Needle Co-Op, the Burlington-based agency currently serves 50 to 75 clients per day and doles out some 300,000 syringes a year.

It was through Safe Recovery that Jessica finally got clean. Three years after the Staples parking lot incident, she said, and weighing just 90 pounds, she hobbled into the program's headquarters with an injection-induced abscess on her foot. There she encountered Safe Recovery program director Tom Dalton, whom she had gotten to know through its needle-exchange services.

"He was like, 'Are you sure you don't want treatment?'" Jessica recalled.

She told him it was pointless, because she had already been on a wait list for two years. But when Dalton called to check on her status, he learned that a space in a treatment program had just opened up. Within four days, Jessica was enrolled in a methadone clinic. She said she's been clean ever since.

Last Wednesday afternoon at Safe Recovery's Clarke Street office, Dalton chatted with three staff members in the first-floor room where they distribute supplies to clients. One wall was lined with shelves full of wares: 28-gauge needles in packages of 10 and 100, blue and white tourniquets, alcohol wipes, and containers filled with sterile water. An adjacent room housed a collection bin for used syringes. It was filled with Powerade bottles, milk containers and Pepperidge Farm Pirouette tins, all stuffed with needles.

Staffer Carrie Kissick sat at a desk with a pair of tweezers stuffing tiny cotton filters — used during the injection process to keep impurities out of the bloodstream — into plastic bags. Taped to a metal cabinet behind her was an orange and blue sign with hundreds of hand-drawn hash marks — each representing an overdose reversed by Narcan distributed by the clinic.

Grace Keller, Safe Recovery's case management supervisor, described a visitor who had dropped by moments earlier. "The person ringing the doorbell was coming from Newport to get Narcan because they had two overdoses up there," she said. "Usually we close the door for lunch, but I'm not good at that. If the doorbell rings, I'm like, Gosh, they need something."

What Safe Recovery's clients need most is treatment, according to Dalton, but not all of them are ready to take that step — nor is it available to everyone who seeks it. Over the past three years, Vermont's waiting list for methadone and buprenorphine programs has decreased from a high of around 600, according to the Department of Health, but by last November it still hadn't dropped below 200.

"We have hundreds of people that can't access the treatment they need," Dalton said. "So we need to be doing everything we can to keep them safe, keep their families safe, keep our communities safe while they're waiting to get treatment."

Supervised injection sites would do just that, he believes, by providing a clean, well-lighted place for users to inject — and medical care to respond to overdoses.

"These are good people who go through a lot and have incredible courage and perseverance, and it's frustrating to see them not get the support that they need when they need it," Dalton said. "They're here talking to us — often young people with a lot of life ahead of them — and then you hear a few hours later that they've overdosed and died."

"We remain open to the potential value of operating such a program," he said. "But, like anything that has to do with this particular disease, it's complicated and complex — and at this stage in the process I think there are more voices that need to be heard as to whether this is the best strategy for Vermont."

Bick's not the only one proceeding cautiously.

Gov. Phil Scott said through a spokesperson that he would "need to learn more about the proposed legislation" before weighing in on it. Attorney General T.J. Donovan, who has championed other innovative approaches to combating drug abuse, said he's "not ready to endorse" supervised injection sites. Among his concerns is how the federal government would respond.

"I think it should be discussed," Donovan said. "I just don't think it's ready for prime time."

Vermont Cares executive director Peter Jacobsen disagrees. His organization, which works to prevent the spread of HIV/AIDs and hepatitis, used to encounter resistance to its needle-exchange programs — particularly in Vermont's more rural reaches. But as the opiate crisis has spread, he said, the tone has "changed dramatically."

"I think the timing is right for this conversation," said Jacobsen, whose organization is also interested in hosting supervised injection sites.

In Colburn's view, that conversation should be about quality of life as much as preservation of life. The freshman legislator, who spent the past four years on the Burlington City Council, says she's recently noticed more discarded syringes in her Old North End district and an uptick in public drug use.

Last July, blocks from Colburn's house, a 5-year-old boy was discovered yelling for help in the back seat of a car parked outside Pearl Street Beverage. His parents had passed out in the front seats after injecting heroin, according to police.

Burlington Mayor Miro Weinberger is alarmed by the frequency of such incidents. He said he's "supportive" of Colburn's legislation because it "broadens the array of options a community has to address this terrible challenge." But that doesn't mean the mayor would support any injection site proposed for his city. First, he said, he would want to ensure that those taking part in the program have ready access to treatment.

"Right now, we have a wait list of epic proportions in Chittenden County," the Queen City chief said. "And I don't think we'll be ready for an injection site until everyone who walks into that site will be into treatment by the end of the day, if desired."

After a decade of sobriety, Jessica still marvels at the strength of the addiction she faced. Before shooting up alone at home, she would push the talk button on her cordless phone.

"My hope was that if I did start to [overdose], I could quickly dial 911 — and even if I couldn't say anything, they would trace the call and come to my house," she said. "That just goes to show that I thought it was such a risk, but I still was gonna do it."

While treatment eventually worked for her, Jessica thinks supervised injection sites would have helped her along the path.