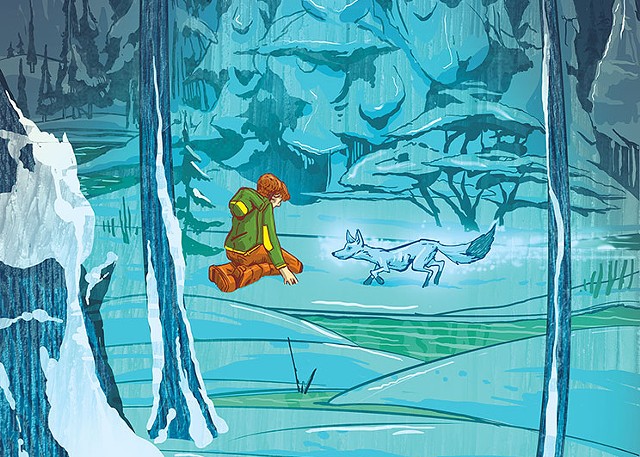 They were standing in the driveway beneath the dry black sky and the sharp white stars. The snow was deep and clean and everywhere. It had been cold for a week. Ten below, 15 below, 20 below during the days. Zach was talking to himself. Looking at the stars. Looking and talking. Talking about whatever. One minute Lazy was close, peeing, and the next she was gone, disappeared into the birches.

Lumps all over her body. Dying of cancer. She was an old dog, a friend from childhood. At the vet's office that morning they had shaved rectangular patches in her coat, right down to the skin. Gave her shots.

Shit, Zach thought. Guilt rising inside him, fear rising beside it, a third thing he did not have a name for rushing to overtake the two. He thought of those rectangular patches. Scrambled up the snowbank and into the woods. Called her name again and again. Lazy, Lazy, Lazy, Lazy.

Lamps winked in the windows of neighboring houses. Everything was perfectly, horribly still. Zach was wearing jeans and a parka and gloves. Stumbling and sweating. Sobbing. Snot frozen across his face. The track became confused, Lazy's prints crossing others. Then the river. The river. At the river it became clear. There was no use.

Here was a moment like all moments. Bottomless, infinite, only more so. Zach dropped to his denim knees. His voice would not come out to say her name. His voice was not his voice, not his to command. 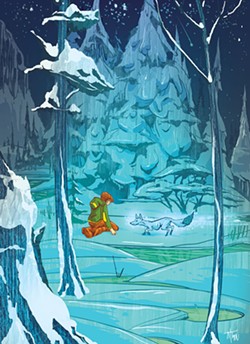 And like that, just like that, something was at his back. Some presence. Some whisper. He stood and turned and saw a red fox that in the strange light of winter looked blue. The blue fox came forward. The blue fox stared. Zach eased off his glove. Lowered a bare hand. For an instant there was nothing. Nothing but the warmth of the tongue.

You know, Zach thought. I know you know. This is your way of telling me that you know. Please. Please lead me to her.

Weaving between the pale trunks of birches. Pausing. Starting again. He followed, keeping his distance, holding a space between their bodies. The fox would pause. Swing its brushy tail. To make sure I'm still coming, Zach thought.

Like that. On and on. Time went brittle, broke to pieces. Now they were far from the river. Far from the neighbors. Far from anything. It was a different world, impossibly distant. It was burning lungs, negative 30, a clearing, a tall snag with twisted branches.

But the fox only circled the snag and gave a look. A look that said a word. That was a knife. That dropped Zach to his denim knees. The nameless feeling, companion of fear and guilt, rose like sickness. It rose right out of him and sprayed across the white.

Bed of snow. Tight curl. The fox snugged itself down to sleep.

This is what they do, Zach thought, wiping his chin. Teeth chattering. Tears glassing his cheeks. Animals are at home out here, in this, in themselves. They are at home in their bodies and even in their deaths. He called a final time. Closed his eyes. Saw those bare shaved rectangles on her side and belly. Saw her somewhere he could not see.

Overhead the stars cut the sky as they always have and always will. Zach felt them against her skin. His skin. And then he stood and broke a new trail home.