Under 21? No Problem. You Can Buy a Vermont Liquor Gift Card 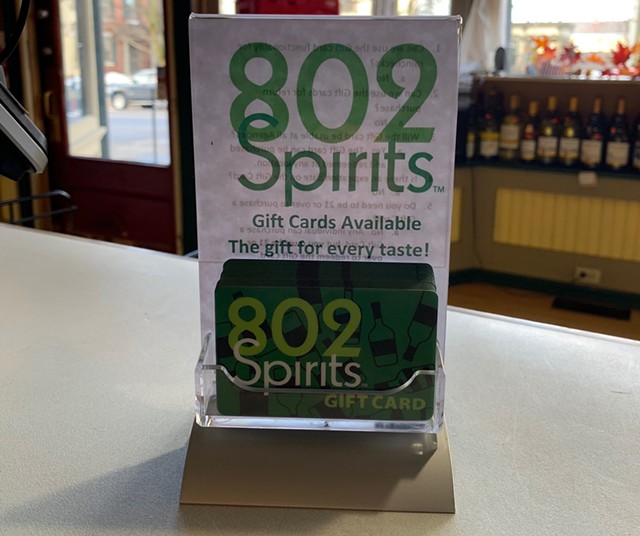 This holiday season, anyone can put money on an 802 Spirits gift card for that special someone.

It's the anyone part that disturbs Kerin. Since he bought the store about a decade ago, Kerin has instructed his employees to card patrons and to refuse the sale of alcohol to anyone under 21. But the fine print on the gift card says those in the booze business can sell them to people under 21 — though minors can't redeem them.

Kerin worries about the message that sends to children.

"There may be a legal right to do this, but there's also a moral right, and it doesn't morally make it the right thing to do," he said. "I want to make a buck. But the reality is, not if there's a chance that this could be a problem with our youth. That bothers me."

Patrick Delaney, commissioner of the Vermont Department of Liquor & Lottery, which regulates the sale of liquor, said there's nothing unethical going on.

"Our message has consistently been that we do not approve or support underage drinking in any sense," Delaney said. "Selling a gift card to an individual who's under 21 is not contrary to that message."

Because it's a state program, Delaney said, liquor store operators must offer the cards and cannot pick and choose to whom they sell them.

"I believe it would be prejudicial, potentially, to not allow certain classes, certain ages or certain types of individuals to purchase these," he said.

Despite his reservations, Kerin said he would abide by the rules.

"The optics of it and everything else just doesn't make sense in this day and age," he lamented.

The original print version of this article was headlined "Age Appropriate?"