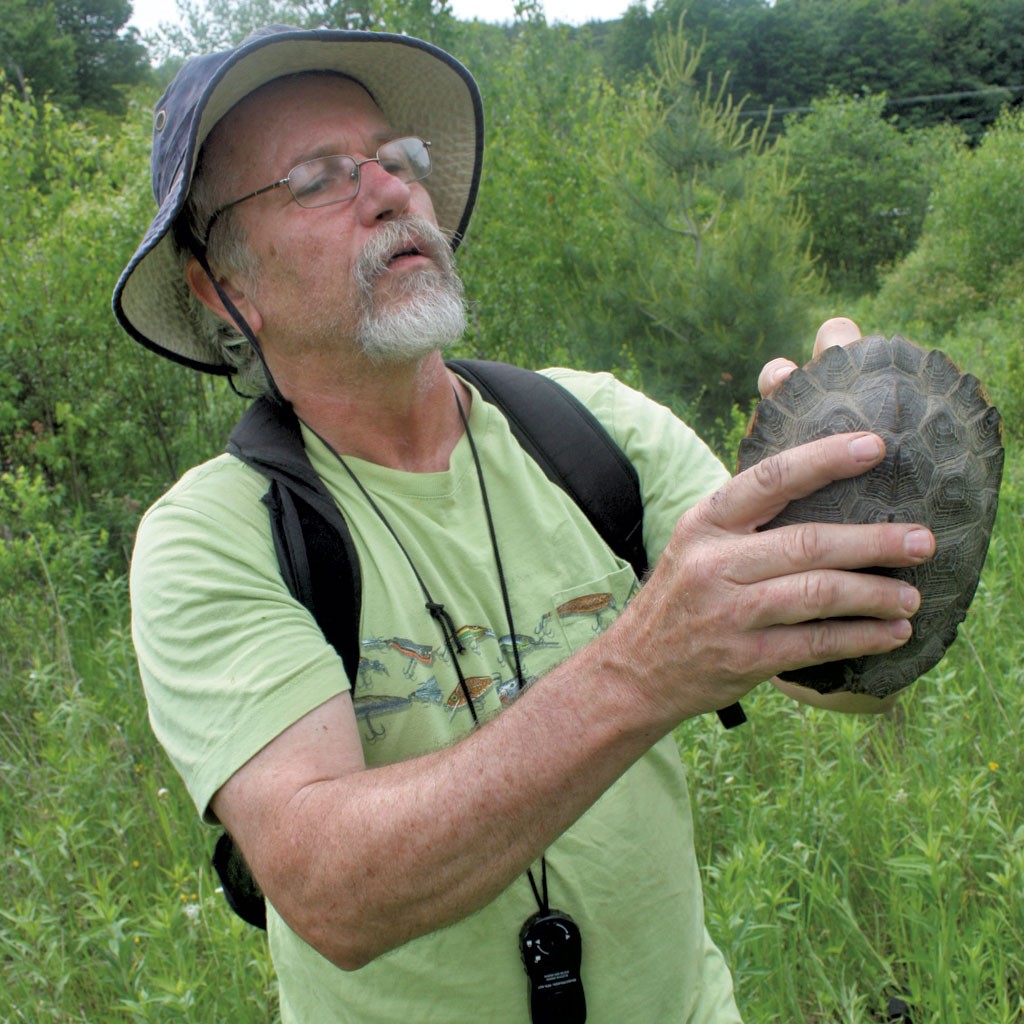 Mark Powell can talk wood turtles for as long as you let him: what they eat, when they breed, where they nest, the social tendencies of males versus females, their preferred habitat based on the season and time of day. Powell has an especially keen eye for spotting the elusive Glyptemys insculpta, aka North American wood turtle, in the underbrush. When the vegetation gets too dense for him to find the turtles, as it typically does this time of year, Powell relies on his trusty turtle-tracking dog, Gracey, to sniff out the reptiles, whose shell length is roughly six to eight inches.

Powell, 53, is a computer network administrator by day and a self-described "turtle wrangler" in his free time. "Wrangling" may seem like too active a verb to describe the pursuit of a shelled creature that can barely outpace the snails, slugs and earthworms it eats. Still, the work of tracking turtles can be strenuous, exhausting and insect ridden, as I learn on a recent outing with Powell and Gracey, his 2-year-old chocolate Lab/pointer mix. Powell adopted Gracey in December 2012 and has been training her ever since to find and retrieve this rare and hard-to-find creature.

Powell and I meet at his Washington County home, then drive a few miles to a stream that borders 65 acres of privately owned woods and riparian areas.

Because the state lists the wood turtle as a "species of special status," it's illegal to remove the semi-terrestrial creatures from the wild, a restriction in force throughout New England. For this reason, Powell, who has a permit from the Vermont Fish & Wildlife Department to mark and track wood turtles in Washington, Orange and Caledonia counties, is particularly cagey about publicly revealing where he finds them in Vermont. In fact, he's so protective of wood turtles that he asks we not even disclose the body of water where these particular ones spend half their lives.

Powell's caution makes sense: Wood turtles can sell online for as much as $300 apiece for a mature female, making them a lucrative target for poachers. Why is the species so desired? It's not for making turtle soup.

"They're thought to be the smartest turtles in the world," Powell explains as we exit his car at one of his regular turtle-spotting locations. Studies have shown that wood turtles can navigate and remember a maze as well as a rat — an intelligence for which exotic animal collectors prize them. Powell theorizes that wood turtles may have developed this ability because they split their time between water and land, and hence require a more sophisticated internal "map" of their habitat than other turtles.

As Powell and I walk through the woods, he takes Gracey off her leash and commands, "Find the turtle!" Athletic and lean, the 43-pound canine immediately bolts into the dense, matted brush, her nose aggressively working at ground level, with only a small bell on her collar to tell us her location. As we wade through waist-deep grasses and ferns with only a light breeze to cool us, it's readily apparent why anyone needs a canine's nose to find wood turtles in the summer. In these conditions, I couldn't find a turtle unless I stumbled over one.

For his part, Powell gets real satisfaction from spotting a turtle that 99 percent of people would never notice, like someone who prides himself on finding four-leaf clovers — a skill he also mastered as a kid. As he explains, the wood turtle's proclivity for sunning itself, well concealed in the weeds, is called "cryptic basking" and protects it from predators. Even Gracey, whose nose is several hundred times stronger than a human nose, generally can't sniff out a wood turtle unless she's within 10 feet of one.

How does one train a dog to hunt turtles? After all, a canine's hunting instincts are triggered in part by its prey's rapid, darting movements — the very antithesis of turtle behavior. Powell initially tried to train his pet beagle to track turtles, he says, but she was more interested in flightier critters such as rabbits, squirrels and birds.

Powell trains Gracey using turtle feces, source of the animal's strongest scent. In early spring, he says, when the wood turtle emerges from its hibernation in the river, it emits virtually no scent, as its digestive system has lain dormant for months. By June, however, the turtle has consumed enough mushrooms, insects, berries, worms and even baby mice for Gracey to pick up the trail.

Within 10 minutes, Powell has discovered turtle tracks along the shore. To my untrained eye, they look like nothing more than faint lines in the sand. But Powell points out where a wood turtle recently came ashore, a single thin line tracing the movement of its tail. Five minutes later, a clearly excited and rambunctious Gracey alerts us that she's found one in the bushes 10 yards away.

Powell is not a formally trained wildlife biologist. His fascination with wood turtles began in 2002, after he and his wife bought six acres in Washington County and discovered a turtle population living along their ponds. Powell, who grew up in southeastern Pennsylvania raising boa constrictors — "I was into them way before Alice Cooper came along," he boasts — suddenly discovered a reptile breed with which he was unfamiliar. Thus was his new obsession born.

Initially, Powell approached Fish & Wildlife about establishing a turtle sanctuary and breeding facility on his land. State wildlife biologists "weren't too keen on that idea," he admits. But they were amenable to letting Powell track, mark and document the turtles and, later, use a dog and radio tags to follow their progress over time. From early spring to late fall, he goes out two or three times a week searching for them.

Powell isn't paid for his efforts, but he serves as a resource for researchers and other turtle enthusiasts. He also gets occasional alerts from neighbors who discover a nest buried in a sandy driveway. In those cases, Powell is authorized to move the eggs to a safer location.

Wood turtles, once numerous throughout the Northeast, now face more threats than Vermont's other turtle species — not only from poachers but from agricultural machinery, lawn mowers, habitat fragmentation and development in general, given that many Vermont roads run along rivers.

"Development means roads," Powell notes, "and roads mean roadkill." Accordingly, Powell often gets calls from people telling him they discovered a wood turtle crossing the road. His advice: Just carry it across, then let it be.

Once Gracey finds the turtle, she paws at it excitedly and flips it upside down with her nose, so she can grip it in her teeth and carry it back to her handler. Though that may seem like a less than ideal way of protecting the species, Powell says concerns about the turtle's welfare are unwarranted. Gracey has a soft mouth — she's a retriever, after all — and the turtle's hard shell and plastron, or rigid underbelly, have evolved to withstand the teeth of predators.

"It scares them a little, but this is what turtles have been doing for 60 million years — hiding in their shell and protecting themselves," Powell says, holding up the turtle, which has fully retracted its head and limbs. "From the turtle's perspective: 'Yeah, I've been through this before. I know what to do.'"

As Powell displays this turtle, we see the reason for its scientific name, Glyptemys insculpta. Insculpta means "engraved," and the shell looks like it's been etched with a dozen stepped pyramids. The turtle's head and limbs are a distinctive orange, which Powell says gets even more vivid in fall when the species is breeding.

The flat underbelly indicates that this is a female. She weighs 880 grams and measures 7.25 inches long, which Powell jots in a notebook. He then counts the lines on her plastron, like rings on a tree, to determine her age. This turtle may be 12 or 13, hence not even of breeding age, he says, though we have found her in a location where Powell has often seen turtles make their nests. He says he occasionally finds immature females in the vicinity of nesting areas, perhaps following a homing instinct to their hatching site. (Wood turtles can live 40 years in the wild, longer in captivity.)

This turtle also has two notches along the edges of her shell that didn't occur naturally; Powell put them there himself. He estimates that he originally marked this turtle back in 2007 or 2008. The markings serve a dual purpose: If law enforcement ever recovers this specimen from a poacher, Powell can go into court and easily identify it as having been taken from the wild.

Finally, Powell photographs the turtle and puts it back where we found it — much to the chagrin of Gracey, who's eager to keep playing with it like a tennis ball. Powell directs the dog upwind, and soon she's eagerly following another scent.

For the next hour or so, we follow Gracey through the high grasses and ferns. She flushes a woodcock, but no more turtles. By 4:30 p.m., the breeze has died and the humidity has risen, along with the deer flies. When it's clear that Gracey has lost her focus and gotten, as Powell puts it, "squirrel crazy," we call it a day.

As we walk out of the woods, Powell muses on the wood turtles' future. It's been a disappointing year for tracking them, he says, speculating that many were washed downstream by early spring floods and are still making their way back upstream. Some researchers have predicted that the wood turtle, once so abundant in Vermont that people could find 100 in a day, could be extinct in the wild by century's end.

"I'm a little more optimistic than that," Powell says. As if on cue, he reaches down, plucks a four-leaf clover and hands it to me. With Powell on their side, perhaps the wood turtles will get lucky after all.

The original print version of this article was headlined "Shell Game"