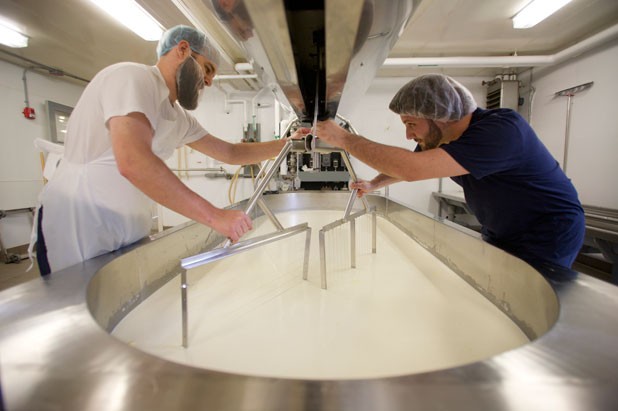 “It’s terrible to be here when you’re hungry,” admits Jesse Werner. He’s standing in the processing room at the Plymouth Cheese Factory surrounded by edible temptations of his own creation. Rounds of granular-curd raw-milk cheese are stacked up waiting to be waxed and put to bed in the cooler for 10 months. Andy Smiler, an apprentice cheese maker wearing a net over his bushy beard, bisects a wheel with a two-handed serrated knife as a Grateful Dead tune plays in the background.

Werner, 29, slices off a thin piece of the 3-month-old East Meadow and places it in his mouth. “It’s a cousin of cheddar,” he says. “Lighter, more elastic, more airy, more subtle in flavor.”

Werner started making cheese here in July. By spring, his first batch of 10-month-old Plymouth — the older version of East Meadow — will be ready to sample and sell. Plymouth Cheese is the only factory in the United States currently making this variety, a New World relative of the old Lancashire and Cheshire cheeses of England. With training from experts at a relatively new institute at the University of Vermont, Werner hopes to find his niche in the lucrative artisan cheese market. Once his product hits shelves, it will be the closest thing consumers can find to the cheeses America’s first farmers produced in the 1600s.

Appropriately, the bricks and mortar here are imbued with history, as well. The second-oldest operational cheese factory in Vermont, Werner’s facility occupies the President Calvin Coolidge State Historic Site in the hilltop hamlet of Plymouth Notch. Pres. Coolidge’s father, Colonel John Coolidge, was one of five farmers in the area who helped construct the factory in 1890, and its first run of Plymouth cheese debuted in 1892.

The Crowley Cheese Factory, over Shrewsbury Mountain in Mount Holly, churned out its first wheels in 1882, making it the senior cheese producer in Vermont. But being a ward of the state like Plymouth Cheese has its privileges. A museum on the factory’s second floor holds the original wooden cheese vats, presses and even a fading remnant of a 1930s-era cheese recipe.

Werner, who has dark hair, brown eyes and a short beard, is an heir to the Coolidge family in occupation only. He grew up in Fairfield on a piece of property that produced one of Vermont’s other gustatory delights: maple syrup. But he was hemmed in on all sides by dairy farmers, and he liked the idea of making a living through a close connection to the land.

“I thought, How can I be here and make this work for me?” Werner remembers. Then he met John Samokas, a family friend in Fairfield who keeps goats and makes his own feta. “He gave us some cheese,” Werner says, “and I said, ‘Wow, this is really good. How do you do this?’”

Samokas said, “Come over, and I’ll show you.” If there is such a thing as a cheese bug, Werner was bitten by it.

But wanderlust took him first to Brandeis University and then to Europe, where he traveled for a few years, tasting different varieties of cheese. In 2006, while in Prague, Werner earned a master’s in business administration.

The know-how came in handy when he returned to his home state, confident that cheese making was the way to add value to the milk Vermonters already produced. He also had noticed the Vermont Seal of Quality on a host of foods not made in the state. If the cows in his neighborhood were providing the foundation of those fancy yogurts, butters and cheeses, he recalls thinking, why couldn’t he keep the production closer to home?

The answer Werner got from the Vermont Institute for Artisan Cheese (VIAC) was You can, and we’ll help you! The VIAC center at UVM was founded in 2004 with the aim of encouraging artisan cheese making through research and education. It’s the only such body in the United States, and its location in the state with the highest number of such producers per capita is no coincidence. VIAC offers two cheese-making certificate programs, along with public education classes on topics such as cheese tasting and the technical sides of making tommes, chèvres and cheddars.

Werner started taking courses at VIAC in 2007 and spent the next two years working on his business plan. That process, he says, “begins with eating a lot of cheese, because you have to think, If I made a cheese, what kind would I make?”

You also need to know what will sell, what kind of production process you’ll enjoy, and what level of technology you’ll have access to. The idea of making old-school cheese struck Werner when the Agency of Commerce and Community Development announced that the Plymouth factory was available for lease. The previous tenant, Frog City Cheese, had made historical granular-curd cheese since 2004, so the factory was nearly turn-key.

Werner submitted a detailed business proposal, wherein he described his plans to make about 3000 pounds of cheese per month. In addition to the East Meadow and Plymouth varieties, he intends to produce PassionDale, a Belgian-style, semisoft washed-rind cheese aged for 90 days. He hopes to sell it at South Burlington’s Healthy Living and City Market in Burlington, at local farmers markets, and in green markets in Boston and New York City.

For now, Werner is putting away about 400 pounds of East Meadow and Plymouth every day. For the most part, the process would be recognizable to Colonel Coolidge — though the milk arrives at the factory not in 40-gallon tin buckets from the barn but in a gleaming milk truck that picked it up from Carabeau Farm in Tinmouth earlier in the day.

The truck pumps 1000 gallons — enough for two days of cheese making — into the stainless steel tank inside the factory. From there, a portion of the Holstein milk is transferred to the cheese-making room, which has a large metal vat and two hydraulic presses. Werner fills the vat with milk and starts heating it. When the right temperature is achieved, he “seeds the vat” by adding the cultures — French freeze-dried bacteria in powder form, selected for their impact on taste, texture and aging. When they hit the warm milk, the microbes go into a reproductive frenzy, breaking down the amino acids, proteins and lactose. Werner tests the pH to make sure the milk is acidifying at a consistent rate.

Cheese is little more than curdled milk, so the key to the process is the coagulant called rennet, which is a protease enzyme extracted from the small intestine of a nursing calf. Who came up with the idea of adding that to milk? Legend has it that an ancient Mongolian rode his horse across the steppe and when he stopped to drink from his calf bladder filled with milk, found it had turned chunky.

It’s more likely that the ancient Egyptians learned about the powers of rennet when they stored their milk in the stomach of a goat or cow and, a day later, saw it had curdled. They figured out how to strain out the liquids (whey) and store the dried curds for years. Vegetarians will be happy to know that there are a few types of plant-based rennet made from thistles, ivy and nettles.

Werner opts for the animal rennet. He adds it, stirs for two minutes, and waits 12 to 13 minutes for the magical coagulation to happen. Slowly, a gel-like mat forms over the milk. “At one point,” he says, “it flows over your finger, and then it stops flowing and oozes.”

This marker, called the “flocculation point,” means that the chemicals have reacted to form a matrix, transforming the structure of the milk from a pure liquid to a solid. When the contents of the vat resemble stiff custard, Werner uses wire paddles to cut the curd into chunks the size of corn kernels. The cutting releases the whey, and after a good hour of bent-over, up-to-your-elbows-in-ooze curd turning, it’s drained out of the vat into a holding tank. Some cheese factories dry the protein-rich whey and sell the powder to companies that make muscle-building drinks. Werner has a permit to spread it on local fields.

With the curd sufficiently dry, Werner adds salt and mixes some more. Then he packs the curds into food-grade plastic bins and loads them in a press, where they’ll stay overnight. The next day, Werner will remove the cheese from the bins and dry the wheels for 24 hours, in a third-floor room set at about 60 degrees with 75 percent relative humidity. After that, the cheese will be waxed or wrapped in plastic — Werner is experimenting with both — and stored in the cooler for aging.

Plymouth Artisan Cheese got its first public tasting on September 12 at the annual Plymouth Cheese and Harvest Festival. Curious locals, many of whom worked at the factory in the old days, showed up to sample the 60-day-old cheese and see if it matched their recollection of the younger cheeses they used to make. According to Werner, the product did not come off as an imposter. “This was always the people’s cheese,” he says, “and the local people have embraced it again.”

The true test, however, is still some months away, when the fully aged Plymouth is unveiled. That cheese, which Werner calls an “artifact,” will present a unique opportunity for people to taste Vermont’s agricultural heritage. “This cheese was well-liked by a broad range of people,” Werner says. “I want to keep that memory alive.”