On Tuesday,  Maya Crowley gave a red envelope to every Uncommon Coffee customer who wished her a Happy New Year.

The envelopes — stuffed with small gift cards — were her take on a Lunar New Year tradition, and a way to share her Vietnamese culture with people who came into the shop she co-owns in the Essex Experience.

"It's a big deal to give out little red envelopes of money to kids on Tết," Crowley explained, using the Vietnamese name for the holiday. "It was really nice to spread the Lunar New Year joy."

"Most everyone in almost any East Asian culture will tell you that Lunar New Year means a lot of food," Crowley said.

And while the ingredients in the drink specials aren't specific flavors she associates with Lunar New Year, "I just wanted to do something #VeryAsian," she added with a laugh.

The Cardamom & Smoke latte gets its flavor from lapsang souchong, a Chinese black tea which is dried over pine fire. The Uncommon team makes a concentrate with the tea, then combines it with espresso and steamed milk for a sweet-and-savory drink with a lingering, almost haunting smoky finish. 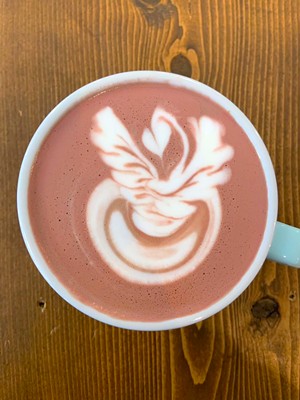 The Ube latte is made with ube flavoring. The sweet potato-like tubers are a trendy ingredient in the U.S., but fresh ube is still difficult to find in Vermont, Crowley said. The drink has a mild, almost marshmallowy sweetness, and ube's signature purple color.

At first, Crowley said she worried that people would be unfamiliar with the ingredients and would hesitate to order the drinks. "But I decided I don't really care," she said. "Because they'll ask questions. And that's how people learn."

Both drink specials will stay on Uncommon's menu through the spring.

Uncommon Coffee also sells coffee beans sourced from Vietnam, including a wet-hulled coffee from Đà Lạt called Vietnam Opal Bold. True to its name, it's bold, full-bodied and complex. It's not a dark roast, but dark-roast drinkers tend to enjoy it, Crowley said. The shop has brewed it in various forms, including as iced coffee, drip, espresso and in a traditional Vietnamese-style phin filter.

"I worked in specialty coffee for years before I ever tried a Vietnamese coffee," Crowley said, despite the fact that Vietnam produces the second-largest quantity of coffee in the world. "We've been doing Vietnamese coffee here since the beginning, and it's been really fun to talk to people about it and see it come to the forefront."