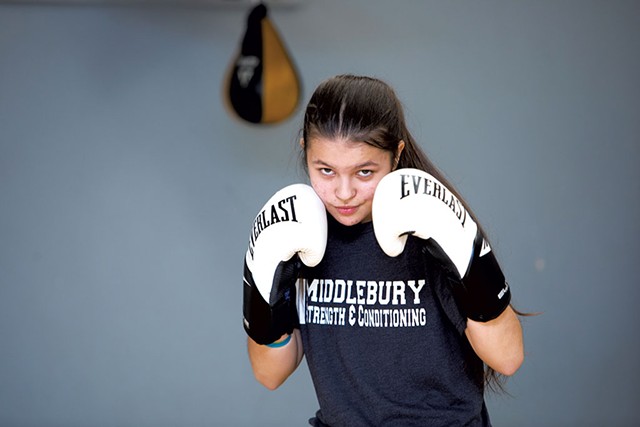 It was a Sunday morning inside the boxing studio at Middlebury Fitness, where Diana Herasim had just gotten a membership. She had been there for more than an hour, pounding the hell out of a punching bag.

The 15-year-old exchange student from Ukraine came to America in August to attend Middlebury Union High School for her junior year and live with a host family. Out of 10,000 applicants worldwide, Herasim was one of only 200 students who won a prestigious Future Leaders Exchange Program scholarship. She had heard about the program several years ago and asked her mom whether she could work toward applying, which involved learning English. Her mom supported her 100 percent.

"For me, as a little girl in Ukraine who doesn't have many opportunities — not more than my peers — it sounded like a dream and a fairy tale," Herasim told Seven Days in a filmed interview at the boxing studio last month. "The person who comes here for one year all alone should be really strong mentally and, well, for me, physically."

Her brother, who's now 25 and her best friend, introduced her to boxing last year. While growing up in Kherson, a city in the south of Ukraine, she was "the weakest girl" in her elementary school grade, she said, and struggled through physical education classes.

As her gloved fists landed thundering blows on a punching bag in Middlebury and her long brown ponytail swished fiercely, Herasim hardly appeared ever to have been weak. But her first days in the boxing ring were merciless, she said.

"I don't like losing. It made me hungry to come back and to take the revenge with myself," Herasim said. "You know the feeling when you actually fight yourself and when you win the fight with yourself — it is the moment when you're proud. It is addictive to win and overcome your obstacles and weaknesses."

The sport has been a therapeutic release in the moments between phone calls with her family following Russia's invasion of Ukraine in February. Her father is currently stuck in her hometown, which is fully occupied by Russia. Her brother, sister-in-law and maternal grandparents were able to flee to a different state in Ukraine they thought was safer. But the bombs soon followed. Eventually, they had no water or power. They were forced to drink water from the river.

Days ago, Herasim's family was able to flee to northern Ukraine. Over the phone, her brother described a long line of cars trying to leave. He told her their family was in the last vehicle that made it out. After their car passed through, there was a big explosion, and the exit was abruptly blocked. As he drove away, he watched the Ukrainian people left behind waving at him.

"They were sobbing and smiling at the same time. They were happy my family survived, but they also didn't know what would happen to themselves," Herasim told Seven Days in a follow-up call.

She cheers herself up before calling her brother, and he does the same, she said. Their conversations are full of hope and talk of when they'll be together in the future.

She's certain that her positive spirit comes directly from her mom, who died two years ago from a terminal illness. But the days between phone calls, when her family doesn't have an internet connection for messaging and calling via Viber, are some of the hardest, Herasim admitted, especially when she sees news stories reporting that military actions are near her family.

"You just can't do anything. You cannot call them and ask if they're all right. You just hope that they will be alive," she said.

Herasim's Middlebury Union High School community has rallied around her. The school's Student Coalition on Human Rights held a vigil on March 29, at which she spoke. She told Seven Days that sharing her story gives her purpose right now and a way to help her country.

Herasim and her family are working on a way to reunite, but they don't yet know how or when. Her host family bought her a punching bag for the garage and said she has a long-term spot in their household. The high school has invited her to stay on as a student next year.

She's been able to call some of her Ukrainian friends, too. One girl described the first day of war: When they began hearing the explosions, her mother had a panic attack and her friend "was saying goodbye to her life," Herasim recounted. Eventually, they went to the basement, where they remain.

Another Ukrainian classmate lives only with her father. He was working out of town and not able to come home. The girl stayed alone in the basement for an entire week. Herasim has learned that other friends have been killed.

"They're supposed to fight," she said. "They're 16 years old, so they are protecting my homeland, and they are dying."

Herasim still remembers the stories her grandparents and great-grandparents told her about World War II and can't believe "they have to go through the same history twice." She believes children will suffer the most.

"What they will remember about their childhood is bombs, explosions ... hoping to get something to eat, seeing their moms sobbing and crying all the time," Herasim said. "So it will be a great damage for people, and especially for younger generations."

As she works to raise awareness and share her stories, she also keeps her eyes on her own goals. One is to become the boxing champion of Ukraine; another is to pursue a career as an interpreter. She's currently learning Spanish and Chinese, and she wants to attend Harvard University.

"Ukrainian people are really strong and, in particular, my family," Herasim said. "I believe that you are who your family is."

Herasim said she models herself after her mom, who was "the strongest person" she's ever known. Even in her final moments, her mom had a big smile on her face, despite being in enormous pain. She told her daughter, "'I love you, and everything will be great,'" Herasim recalled.

"That's how I remember her, because that's what she was," Herasim said. "The last words I said to her is, 'I promise you'll be proud of me.' So everything I'm doing in my life, every step, every goal I achieve is just to prove and to keep my promise and to try to be — at least a little bit — like my mom."