Some Vermont Nonprofits Loan Money to Employees and Board Members 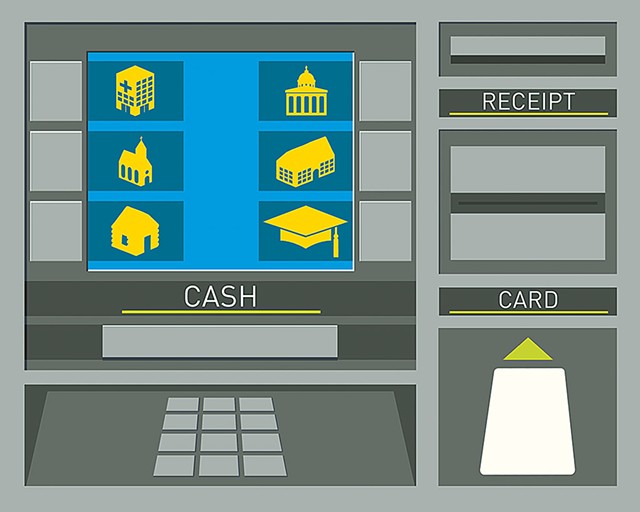 Retired schoolteacher Casey Murrow is known as the son of legendary broadcast journalist Edward R. Murrow. The younger Murrow stood out for another reason when Seven Days examined loans that Vermont-based nonprofits gave to employees and board members: He received more than $300,000 in loans from the education-related nonprofit he ran for more than a decade — loans he is still repaying.

Over the course of two interviews last week, Murrow, 72 and a resident of Putney, contended that nothing was amiss. But the transaction, and others like it, raises questions about a little-known practice. Some nonprofits report loaning funds to employees or directors. A few organizations help employees buy real estate; others provide unspecified personal loans.

Vermont law prohibits nonprofits from loaning money to board members. tweet this

"We shouldn't forget that nonprofits get a tremendous tax subsidy in the form of no taxes," said Todd Daloz, who helped police nonprofits as a Vermont assistant attorney general from 2011 to 2016. "And, certainly, I would want to know a lot more about how a board came to a decision to make [a loan]."

The Internal Revenue Service requires nonprofits, often referred to by their 501c tax classification, to publicly disclose loans to and from "interested persons": current or former officers, directors, trustees, or key employees.

There's an added wrinkle in Vermont: State law prohibits nonprofits from loaning money to board members. Jamie Renner, the sole assistant attorney general who oversees nonprofits in Vermont, said he hasn't gotten a complaint regarding such loans, nor has he investigated any. Renner cautioned that information about the loans contained in nonprofit tax filings is not sufficient to judge if they are problematic. Such a determination would require a thorough investigation by the Vermont Attorney General's Office, he said.

Excluding credit unions, 10 nonprofits in Vermont in 2016 were owed a total of about $900,000 from individuals listed as "interested persons," according to IRS Form 990s in Seven Days' Vermont Nonprofit Navigator database. At least seven loans with outstanding balances in 2015 and 2016 were made to nonprofit board members.

Schedule L of Form 990s details the name of the person who took out a loan, that person's relationship to the organization and other details.

That doesn't mean Schedule L is always filled out correctly.

"990 forms are complicated and, since there is no tax involved, my sense is that a lot of them are prepared incorrectly out of inexperience, ignorance, inattention or sloppy preparation, as if they are not important enough to get right," Colleen Montgomery, a certified public accountant who often works with nonprofits, said in an email.

In Murrow's case, it's unclear how much the board of the Vermont Learning Collaborative, which runs teaching programs for educators, knew about the loans he received. As the group's executive director from the early 2000s until 2017, Murrow said, he "wrote all their proposals for their major funding, which came from a state contract." Previously, Murrow had spent about a decade teaching at Deerfield Valley Elementary School in Wilmington.

Murrow said he didn't recall what salary he was paid for his work at the collaborative and that it varied each year. Of the organization's six publicly available 990s, only one listed Murrow's salary: $59,537 in 2012. To supplement his wages, Murrow said, he took loans as "an advance on salary" that made his compensation commensurate with comparable nonprofit organizations.

"I think [the board] felt it was an excessive amount," said Murrow. "But they had previously authorized it, so that was a little confusing."

Murrow left the job in the summer of 2017. He deferred many questions about the loans to Amelia Stone, the collaborative's longtime board chair and interim director. Stone directed inquiries from Seven Days to Fletcher Proctor, an attorney who helped write a promissory note that Murrow signed last year as he prepared to retire.

According to Proctor, Murrow must pay about $2,000 a month, including 4 percent interest, until the balance is paid off.

For the organization, the loan "wasn't a bad investment," Proctor said with a chuckle, "but that, of course, is not what their business model is about." He also said that Murrow had regularly reported his "advances" to the board.

Other nonprofits not in the loan business have made them, too.

A 2015 Form 990 filing shows that Springfield Hospital had loaned $52,000 to Dr. Gerald Drabyn, a plastic surgeon and board member who still owed $40,000. Anna Smith, the hospital's chief of marketing and corporate communications, responded to Seven Days' queries made to Drabyn and hospital board members. She said Drabyn was elected in December 2015 to serve on the board in 2016 — after the loan was issued.

"The only thing I can share with you is that it's disclosed as is required and is really a personal matter and is being paid back," Smith said.

IRS filings show that Stratton Mountain School, which sent several alumni to the 2018 Winter Olympic Games, has loaned money to Christopher Kaltsas, the school's headmaster and board secretary. He owed the well-heeled private nonprofit ski school $39,438, according to its 2016 Form 990.

"No, no, it's a mistake," Kaltsas said in a phone conversation. "There's no loan."

He said the outstanding amount was much closer to $9,000 and was a result of a "due to/from" account he kept with the school. Kaltsas often travels to raise money for the school, and its accountant uses that line item to document expenses, he said.

Pressed further, Kaltsas said: "There was never a formalized loan where the school gave me that money and I was obligated to pay it back."

Kaltsas said the "mistaken entry" had been corrected three or four years ago on the school's certified financial statements. "And yet someone in the office missed making that change on the 990," he said.

Details of the line item have been on the school's 990 forms — signed by Kaltsas — since 2010, when an accountant noted an original principal loan amount of $72,231.

Kaltsas, headmaster for the last 22 years, said he likely missed the error when reviewing the lengthy IRS document. Gary Giulietti, the board chair, did not respond to a message left at his Hartford, Conn., office.

Other organizations appear to use loans to sweeten the deal when they hire new employees. The Aloha Foundation, a 105-year-old nonprofit that runs summer camps and an outdoor education center on two lakes in Fairlee, lent its executive director $658,000 for a home purchase, according to the organization's 2016 Form 990. Christopher Overtree, who served for a year on the foundation's board before becoming executive director in 2015, moved from Massachusetts to Vermont to take the job.

"While our personnel policies prohibit me from commenting extensively, this temporary bridge loan facilitated my relocation to Vermont in late 2016," Overtree said in a written statement. "The loan was charged a market interest rate and paid off in January 2017."

Even nonprofits in the business of making loans, such as credit unions, must disclose transactions involving board members. Sas Stewart, the co-owner of Middlebury-based Stonecutter Spirits, sits on the board of the Addison County Economic Development Corporation, a 501c6, and owes it $140,656, according to the corporation's 2016 Form 990. She explained that she'd gotten a total of $200,000 in business loans through the organization in 2015, well before she became a board member in January 2017. The board adheres to a strict conflict-of-interest policy, she said, and a separate committee makes loan decisions.

"We always are really open about the kinds of organizations we represent, professionally and personally," Stewart said. "There's no direct relationship between who gets loans and the board. There's zero crossover, for all the right reasons."

Mistakes are sometimes made on the 990 documents — just ask Alan Stearns. He was chair of the Waitsfield-based Northern Forest Canoe Trail board in 2016 when the nonprofit noted on its Schedule L that he'd borrowed $10,000 for "cash flow." But Stearns had actually lent the organization $10,000 during a rough patch, according to documents he provided to Seven Days. By early 2017, after holiday season donations had refilled the group's coffers, Stearns said, he had been paid back, without interest.

Murrow, too, has loaned money to a nonprofit, records show.

While he worked at the Vermont Learning Collaborative, Murrow ran another nonprofit dedicated to teacher education. He incorporated Synergy Learning International in 1993 and still serves as its treasurer and executive director. Among the educators Murrow named to the board was his wife, Meredith Wade.

But to "keep the ship afloat," Murrow said, he often paid salaries and other expenses out of his own pocket. By 2011, according to the organization's Form 990, the nonprofit owed Murrow $740,393.

On July 11, 2014, Murrow "forgave $754,809 of loans and accrued interest payable to him as of that day," the organization wrote in its 2014 IRS filing. Murrow said he'd realized that Synergy would never be able to pay him back. Indeed, in 2016 the nonprofit took in just $12,130 in revenue. Murrow said he wrote off the loan as an investment loss on his personal return, presumably reducing his taxable income.

"It made good business sense at that moment," he said. "It didn't seem to me — to any of us — that Synergy was going to be able to raise that much money to repay the full amount that was owed."

His board appears to have provided little oversight regarding the loans. David Sobel, a board member listed as Synergy's president in 2011, said, "I know nothing about it." Sobel, a professor recently retired from Antioch University New England, said that he hadn't communicated with Murrow in "a decade, probably." Speaking from his New Hampshire home, Sobel said he had no idea he was still connected to the organization. He said that he hadn't participated in a board meeting in 20 years and that the board made few decisions.

Instead, Murrow called the shots.

"I hope I'm not legally obligated for some bad debt," Sobel said.

Sobel wasn't the only board member surprised to hear from a reporter asking about Synergy. Wade, Murrow's wife, said she didn't remember a loan of that amount.

"I can't imagine it would be that much," said Wade, who is listed as the board's current president in Synergy's filing with the Vermont Secretary of State's Office. "That's such a big number for a very, very small organization that at any time had only one or two employees."

Asked about the possible discrepancies, Murrow denied any dysfunction and contended that the board conducted phone meetings. So, did its members know about the loans he'd made to the organization — and later forgave?

"They were aware of it from telephone conversations," Murrow said. "I really don't know how seriously they took all that."

Disclosure: Colleen Montgomery is an owner of the Burlington accounting firm Montgomery & Granai, which does tax preparation for Seven Days.

The original print version of this article was headlined "Piggy Banks"