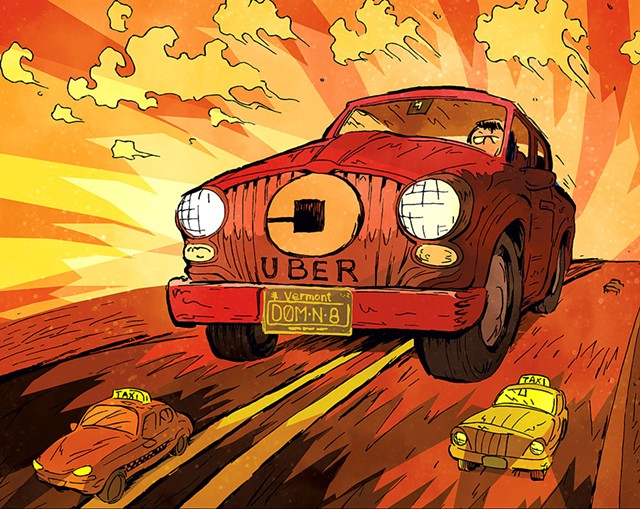 Eric Bingham guided his Toyota Prius through Burlington's New North End Monday morning and explained how he launched a second career. The engineer took a buyout from GlobalFoundries in late 2015. Five months later, he was sick of sitting in front of the TV and missed making money, he said. He bought a used hybrid and started driving for Uber.

"You meet a bunch of interesting people, and you can turn it off and turn it on whenever you want," he said.

Someone always wants a ride, he said. University of Vermont students making short trips are his most reliable customers. But a surprising number of people commute to work via Uber: Earlier Monday, he'd driven a woman from Winooski to her job in Williston. Occasionally, he bags bigger fares, such as the mother and daughter who needed a lift to a horse show in Lake Placid, N.Y., and the two men who discovered they couldn't rent a car at Burlington International Airport on a day when they needed to get to Rutland.

The steady demand has helped Uber not only to thrive but to dominate Burlington's vehicle-for-hire scene. Three years after it started doing business in the Queen City, Uber has become by far the most popular livery company in the area, according to city data.

Under a revised taxi ordinance that Burlington adopted in 2016 — largely prompted by Uber's arrival two years earlier — vehicle-for-hire companies pay 25 cents for every ride that begins or ends in Burlington. Fifty-three registered vehicle companies generated $106,962 for the city from November 2016 through September 2017.

"It's amazing the number of rides they provide," said Bill Keogh, who sits on Burlington's Vehicle for Hire Licensing Board. "It's way far ahead of what the city anticipated."

Founded in 2009 in San Francisco, Uber has spread to 616 cities in 77 countries with a simple business model. Users activate Uber's app on a smartphone to request a ride to a particular location. GPS calculates the travel distance and, figuring in supply and demand, calculates a price for the transport. Rush-hour rides and extra-large vehicles cost more. The ride-sharing option, uberPOOL, is cheaper, but trips can take longer.

With the press of a finger, the customer summons a chauffeur and authorizes Uber to charge his or her credit card. The available driver who accepts the job gets a cut of the cash. That individual has passed a background check and is operating a fully insured vehicle that is no more than 15 years old. Passengers and drivers are invited to rate each other. The resulting honor system encourages good behavior and trust.

Uber declined to discuss its operations in Vermont, which now include skier-friendly service to Killington and Stowe, or future plans. But this much is clear: The ride-share behemoth is mostly getting its way here.

The Vermont Department of Labor recently sided with Uber in a decision that supports the company's MO. The department found that drivers such as Bingham are independent contractors — not employees of Uber. That means the company doesn't have to pay into the state insurance fund that protects workers who have lost their jobs, and drivers can't collect unemployment.

The September 1 decision, which has not yet been reported, is sure to escalate a long-running labor feud in Vermont. Labor activists have long pushed for a crackdown on companies that they say avoid paying for benefits, including unemployment insurance, workers' comp, Social Security and Medicare by calling workers contractors instead of staffers.

Two years ago, a group of pro-labor lawmakers urged the department to classify Uber drivers as employees.

The department finally addressed the question last month. And when it did, the decision was narrow, applying only to unemployment benefits. The department did not rule on whether drivers should be considered employees for the purposes of workers' compensation claims — for which it has separate standards.

Stephen Monahan, who runs the department's workers' compensation and safety division, said regulators would not consider that issue unless an Uber driver files a claim.

For unemployment benefits, the labor department applies the so-called "ABC test" to determine whether someone is an employee or a contractor. It considers whether the person operates free from direction and control, whether the work performed is outside of a workplace's normal business, and whether the person is engaged in an independent trade.

Labor Commissioner Lindsay Kurrle said that, according to those criteria, Uber drivers meet the definition of independent contractors.

"Our interpretation is, [these] companies do not exercise control or direction over the driver," Kurrle said. "Drivers access the app when they choose to, and they're free to work as much or as little as they wish. The drivers have autonomy over whether they're going to accept a request for service, and the [company] has no ability to demand that particular passengers are served by one driver or another."

Kurrle also noted that drivers are free to work for multiple ride-sharing companies, which played a role in the decision.

"When you're an employee, you get benefits," Vermont AFL-CIO president Jill Charbonneau said. "People need a retirement at the end of the day." They need Social Security, Medicare and unemployment insurance, too, she said: "These things don't change. I don't care how many magic wands you wave."

Kurrle insisted that the department's ruling applies only to ride-share companies such as Uber and its biggest competitor, Lyft, and does not create a wider precedent. And if a driver chose to file a claim for unemployment benefits in Vermont, the agency would not automatically reject it, Kurrle said.

But the ruling nonetheless is the first significant one as Vermont begins to navigate the challenges posed by the gig economy. It comes on the heels of a July Vermont Supreme Court decision that determined workers who have their own LLCs can be classified as independent contractors — as opposed to employees.

Charbonneau said her organization is considering lobbying the legislature for a bill that would constrict the definitions of those terms. In California and New York, regulators have ruled that an Uber driver can be considered an employee.

But Uber cheered the Vermont labor department's decision and noted that it is in keeping with similar rulings in at least 18 other states. In Florida, a state appeals court upheld a determination that drivers are independent contractors.

"Nearly 90 percent of drivers across the U.S. say the main reason they use Uber is because they love being their own boss," Uber spokeswoman Alix Anfang said.

Ditto for Lyft. Todd Bailey, a partner with the Montpelier lobbying firm Leonine Public Affairs, represents the app-based ride-sharing company that arrived in Burlington in May.

Bailey said Lyft's internal studies show that 82 percent of its drivers work fewer than 20 hours a week, and 93 percent say their flexible hours are important. Bailey declined to comment further about the labor department ruling or Lyft's operations.

The road hasn't always been straight or smooth for Uber. The private company valued at $70 billion is facing sexual harassment and discrimination allegations, as well as an intellectual property lawsuit filed by Alphabet, Google's parent company, over driverless car technology.

An internal investigation conducted by former U.S. attorney general Eric Holder recommended sweeping changes at the company. Uber's major investors pressured CEO Travis Kalanick to resign in June after it became clear that he fostered a corporate culture that degraded women. The company's widely anticipated initial public stock offering has reportedly been delayed because of the upheaval.

Closer to home, Uber has been battling with authorities in Québéc and recently threatened to cease operations in the province unless the government backed off proposed regulations that could require drivers to undergo 35 hours of training.

In Burlington, grievances are prevalent among traditional cabbies. "They are getting the lion's share — they're killing the cab industry," said Ricky Handy, owner of Blazer Transportation Group in Burlington. "I hear it all the time from the other companies. They hate Uber."

Handy conceded he's also taken a hit but said he has avoided losing much of his business to Uber by maintaining a "higher-end" service with a fleet of 15 Chevy Suburbans and friendly drivers who know the local traffic patterns.

Bingham gets around, too, and said he plans to drive for Uber — and now Lyft — for the foreseeable future. He estimates that he earns $15 an hour, without working nights. Another Burlington Uber driver who did not want to give his full name said he makes between $500 and $1,000 working about 20 hours a week.

Bingham said he would never want to be a full-time employee. He values his flexibility too much.

"Last summer, I took a 10-day vacation with my girlfriend out West," Bingham said. "I didn't need to ask or take vacation time. This model was designed for people who have a car and time and want to make extra income. It's not a full-time job. If you need a full-time job, you had better get one."