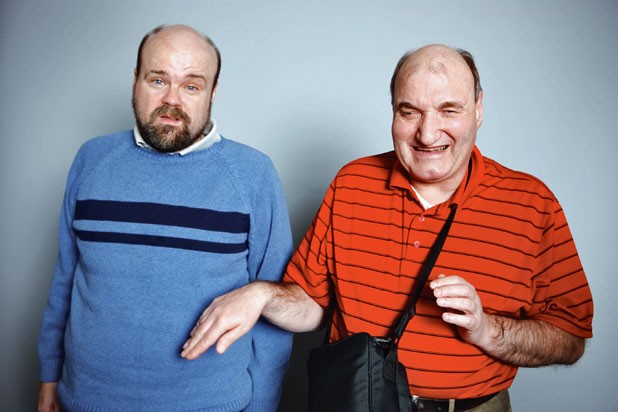 J. Ralph isn’t a household name, but you’ve likely heard his music. The New York-based composer has scored commercials for major brands such as Nike, Porsche and Volkswagen. He has also penned music for Oscar-winning documentaries, including Man on Wire and The Cove. His latest project is a score and an album of original songs for the recent documentary Wretches & Jabberers, by Academy Award-winning filmmaker Gerardine Wurzburg. In the film, Vermonters and disability advocates Tracy Thresher and Larry bissonnette embark on an epic journey to Sri Lanka, Japan and Finland to “change attitudes about disability and intelligence.”

Thresher and bissonnette are autistic and grew up unable to write or speak. For most of their lives, they suffered from profound discrimination and isolation due in part to their inability to communicate with other people. In Wretches & Jabberers, they explain how learning to type changed their lives forever — and the lives of the autistic people they meet in their travels. Through most of the film it is often difficult to understand what the two friends are saying when they speak. But the moment they have a keyboard and a screen, their words are revealed to be full of startling insight and moving, poetic expression.

Wurzburg is no stranger to documenting the struggles and triumphs of Americans living with disabilities. She won an Oscar for her short-form documentary “Educating Peter,” and a nomination for her film Autism Is a World. She could have worked with any number of composers but was attracted to Ralph’s work on Man on Wire and The Cove.

“Choosing a composer to do music for a film is a very intuitive process,” says Wurzburg from her editing room in Washington, D.C. “I needed to find someone that I really thought got the film, really understood what a tremendous journey ... Larry and Tracy have gone on in their life through not being able to communicate.”

Wurzburg sent Ralph a rough cut of the film that included “tent” music — temporary tunes the editor and director include to suggest the right moods as they create the rough edit.

“I was very intrigued by [Thresher and bissonnette’s] charisma and their courage and their positivity,” says Ralph on the phone from Los Angeles, where he’s attending a screening of Wretches & Jabberers for the Society of Composers & Lyricists. “So, I wanted to take the journey with them.”

As Wurzburg and Ralph revisited that journey from the latter’s NYC studio, themes for different characters began to emerge. Thresher and bissonnette’s traveling motif, which was Wurzburg’s idea, sounds like something out of an old Western — a happy blend of banjo picking and clip-clop percussion. Nikolai Rimsky-Korsakov’s “Flight of the Bumblebee” appears in a manic sequence that shows Thresher and bissonnette’s new Japanese friend, Naoki, running through his house, slamming doors, opening drawers and shrieking. Though it was originally placed as tent music, Wurzburg and Ralph agreed that it was perfect. It stayed.

Then the songs started to appear. Originally, Ralph offered to write one song for the end credits. As he was writing, he called a few friends — folks such as Ben Harper and Scarlett Johanssen — to ask if they’d like to sing for him. They agreed, as did a handful of other famous friends and artists. Ralph quickly found he had more singers than songs. So he kept writing.

Ralph and his team pulled poignant and powerful lines and situations from the film — often phrases uttered by Thresher, bissonnette or one of their autistic friends — and wrote around them. Ralph even started cold-calling artists he admired to ask them to contribute. Almost everyone did. Norah Jones? Absolutely. Carly Simon? Sure. Bob Weir, Devendra Banhart, Antony Hegarty (of Antony and the Johnsons), Stephen Stills, Judy Collins, Vincent Gallo? You betcha.

“I had the idea that I wanted to get these iconic voices to punctuate the importance here of having a singular voice, the importance of having your own voice,” Ralph explains. “It’s inherent in everybody’s journey that there is a voice to be found.”

And Ralph didn’t just rely on star power and polished talent. He threw in a twist: None of the artists heard their song until they were in the studio.

“I wanted their experience of discovering the song for the first time to be in the studio, and that sense of trepidation and innocence and vulnerability is captured on the recordings,” says Ralph. “I love all these performances.”

It worked. The first song that drops into the movie is Antony and J. Ralph’s “Killingly Hard.” The title phrase comes from the way Chammi, a young man from Sri Lanka, describes trying to figure out how to communicate with the world around him. In the film, the song plays over a sequence that shows Chammi, Thresher and bissonnette all slowly typing out their thoughts on their keyboards. In the next scene, bissonnette explains how he was institutionalized when he was 8 years old and, though a prolific visual artist, didn’t learn to type until he was in his early thirties.

In a later sequence, bissonnette’s assistant, Pascal Cheng, helps him take off his shoes so the group can visit a Buddhist temple. bissonnette, who doesn’t like to be barefoot, gets jittery and nervous. “Leave the boys alone,” he says repeatedly, his uneasy tone escalating until he runs out of the temple. Moments later, buoyant but introspective music drifts in — Devendra Banhart singing bissonnette’s words while, on screen, the Vermonter struggles to type this thoughts.

“Listening to my words like ‘Low Barefoot Tolerance’ places me back at the temple where I had my very Oscar-winning meltdown over having to take my shoes off,” writes bissonnette in the soundtrack’s liner notes. “And ‘Lying Down Statues’ helps out in promoting the powerful, popularly held belief of grand ideas existing in all cultures to give people higher meanings in their lives.

“Looking back on my hard-to-describe quest for language, I learned thoughts in your mind only exist in reality if you have a voice to express them,” he continues. “J. Ralph has lofted Tracy and my thoughts to a cloud of brightness which will shine enlightenment about intelligence and disability over iPod listeners world wide.”

The soundtrack for Wretches & Jabberers was released this week. The documentary, which debuted at film festivals and conferences last fall, will be in theaters this spring.