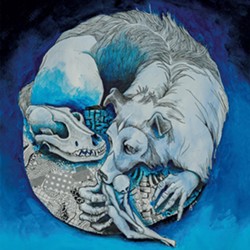 We are rapidly approaching winter's dark onset. To sleep in on a Saturday morning in January is to lose half a day. Seasonal affective disorder will take its inevitable, annual hold. Though it's a dark time, spring promises a way out for the light deprived. But the coming year remains dark for those who suffer from depression year-round.

Burlington's Tyler Daniel Bean is one such sufferer. His struggles with depression are well-documented on his most recent LP, On Days Soon to Pass. He's even come close to giving up on life entirely. But rather than fully succumbing to his internal darkness, he's managed to objectify his struggles and encase them in a nine-track offering of gloomy "heavy indie." Elements of metal, shoegaze and hard rock paint a bleak tapestry of inner turmoil.

Days has a fuller, more realized sound than its more raw full-length predecessor, 2012's Longing. This is not to say that Days isn't quite raw itself, because it is. Perhaps Bean's strong backing band helps to create the rich atmosphere. Vocalist Jess McDermott, of the similarly angsty band the New & Very Welcome, sings nearly all of her backing vocals in unison with Bean's. She remains his lingering shadow throughout, an echo of the dark thoughts that haunt him. The Coydogs' Shannon Stott-Rigsbee's violin is eerie and funereal, adding refinement to songs that often border on sludgy.

The dark onslaught begins moments after hitting play on the opening track, "Archibald Street." Like a death march, distorted guitars and militant drums escort Bean, and the listener, to the edge of composure within seconds. Trembling, Bean sings, "Just hoping it gets better / does it ever get better?" The sentiment is somewhat on the nose, and it's rooted in pure truth. Those who suffer from depression would gladly give up everything to hear a reply to that perennially unanswered question.

"Willow I" and "Willow II" are a combined dark ode to Bean's dearly departed dog, Willow. On part one, his inclinations are made explicit: "My body / I don't want it anymore." On part two, he's still in mourning: "And I pet her / And I tell her / Without you / I can't make sense of my life." The track builds to a cacophonous, wall-of-sound climax.

For all of the doom and gloom on Days, it seems that Bean is finding ways to deal. The album title itself suggests that, even when things are miserable and the sun hides behind a thick layer of gray, the day will pass. And that can be enough to keep us going.

On Days Soon to Pass is available on Friday, November 18, at tylerdanielbean.bandcamp.com.

Speaking of Tyler Daniel Bean, On Days Soon To Pass