Two-Wheeler History at the Sheldon Museum 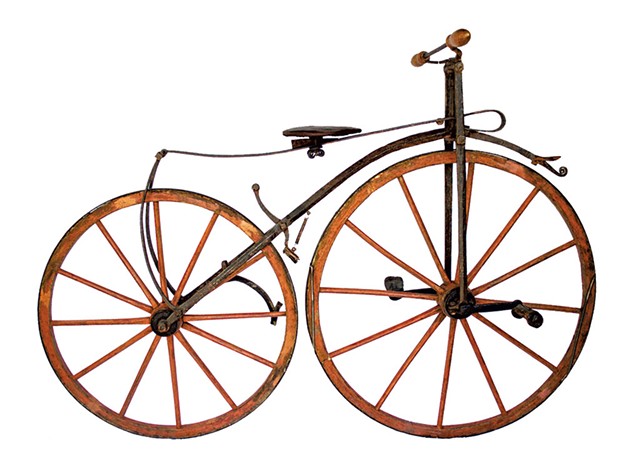 The bicycle history exhibit at Middlebury's Henry Sheldon Museum of Vermont History — titled "Pedaling Through History: 150 Years of the Bicycle, the Collection of Glenn Eames" — will likely appeal as much to art lovers as to Lycra wearers.

As curator and prime lender Eames suggests, many of the vintage bikes on display qualify as "sculpture you can ride." Some were intricately designed by deft 19th-century metallurgists who might be seen as precursors to mid-20th-century abstract-expressionist sculptors. Other historical cycles, such as the Old Hickory, built almost entirely of wood in 1898, are so rich in texture that viewers will be strongly tempted to touch them.

Then there is the first breed of bikes, known as velocipedes, or "boneshakers." Like some ancient artworks, they were originally colorfully painted but now have a misleadingly monochromatic appearance.

A trio of drawings of fuzzy-headed cyclists by New Yorker cartoonist and Vermont cartoonist laureate Edward Koren adds another aesthetic dimension to "Pedaling Through History." Visually intriguing, too, are the photos of stern-faced early cyclists lent by Toronto-based collector Lorne Shields.

In putting these artifacts on display, the show also highlights a key facet of U.S. social history. "Feminine attire and social etiquette" of the Victorian era "denied the pleasures of cycling to women," Eames points out in a bound set of commentaries available to visitors. It was nearly impossible — and quite dangerous — for a woman wearing the requisite long, ruffled dress to work the pedals attached to the five-foot-tall front wheels of the penny-farthing, or "ordinary bicycle," that was the standard model until the 1890s. Then came the "safety bike," with the equal-size front and back wheels familiar to all cyclists today.

That bike owed its name to a design that resulted in fewer injuries to cyclists, who were less likely to be pitched headlong over the handlebars than they were on a penny-farthing. It was the much more easily mounted and ridden safety bike that American feminist Susan B. Anthony referred to as a "freedom machine" for women.

The safety bike "changed everything," Eames notes in his catalog.

A Raleigh International he purchased in 1974 changed everything in Eames' own life. Back then, he confessed during a recent interview at his home in Burlington's Old North End, he was a cigarette-smoking U.S. Navy veteran and Massachusetts resident without much direction or motivation. Buying that Raleigh didn't only prove "transforming, both physically and mentally" — it also put Eames on a career course that has revolved around bikes. 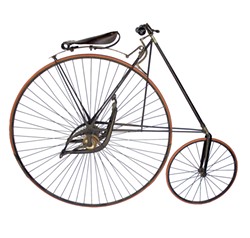 After moving to Vermont in 1986, he worked for several years as a cycle specialist at Skirack on Main Street. In 2000, he opened his own shop: the Old Spokes Home on North Winooski Avenue. Along the way, Eames assembled one of the country's most important collections of old-time bikes. It's the source of 23 of the 26 models exhibited at the Sheldon.

The more he learned about bike history, Eames related, the more he came to appreciate that "the bicycle transformed the lives of people in the 19th century, just like it did for me."

For the show, he has also lent several accessories that indicate how little has changed for cyclists over the decades. Technology has advanced, of course — but, then as now, bikers needed to make noise to alert pedestrians to their presence. A century ago, they used whistles and horns, as well as bells. Locks were also essential accoutrements. En route, cyclists would drink from flasks; après-bike, they might imbibe from beer steins like those on display. An 1895 bike map of Vermont highlights the same routes frequently plied by pedalers today.

Two years of preparation preceded last month's opening of "Pedaling Through History." Sheldon director and fellow cycling enthusiast Bill Brooks originally suggested the idea for the show, but Eames' sale of the Old Spokes Home and its simultaneous merger with Bike Recycle Vermont delayed its fulfillment.

The timing proved propitious nonetheless: This year marks the 150th anniversary of the world's first patent for a pedal-powered bicycle. It was issued to Pierre Lallement, a Frenchman living in New Haven, Conn. A serpentine-style, wooden-wheeled boneshaker included in the show was modeled on Lallement's drawing for his patent application and built in Brooklyn in 1868.

Vermont bike makers get big billing, as well. Eames' guide to the show tells, for example, of the Montpelier Manufacturing Company. Along with a Boston firm, it formed a cartel that, for a time, set royalties that had to be paid by every bike builder in the United States. The final object in the show — which includes only a few models from the past 30 years — is a fat-tired bike manufactured in 2016 by Budnitz Bicycles of Burlington.

If Eames' dream comes true, Vermont will one day become the site of a permanent display of his collection, which is three times larger than what's on view at the Sheldon. "I'd love for it to be an ongoing inspiration for many people," Eames said.

Yo, sponsors of the New Moran facility on Burlington's waterfront — are you listening?