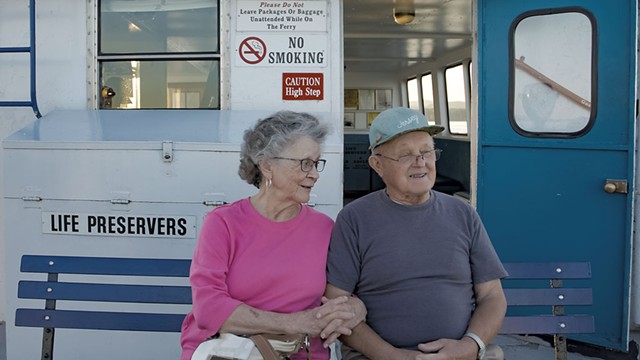 Our streaming entertainment options are overwhelming — and not always easy to sort through. This week, I watched the Netflix docuseries "My Love: Six Stories of True Love," which premiered in April. Each of the six hourlong episodes profiles a couple that has been together for at least 40 years, following them over the course of 12 months.

In the process, the series takes viewers all over the world, with each episode directed by a filmmaker in the couple's home country. You may have heard about "My Love" because Vermonters David and Ginger Isham represent the U.S. in the first episode, directed by Elaine McMillion Sheldon and featuring ample footage of the Williston-Burlington corridor.

In Vermont, "Ginger & David" still live on the farm that has belonged to David's family for more than a century. The cows are gone, though, and the couple's son runs the farm as a four-season attraction while they begin making end-of-life arrangements.

"Nati & Augusto" takes us to a breath-taking mountainous area in southern Spain. Despite health problems, Augusto is determined to fulfill a promise to bring his wife to see the ocean.

In Japan, "Kinuko & Haruhei" have a fascinating and harrowing story about how they met — he was forcibly confined to the leprosy hospital where she worked. "Saengja & Yeongsam" run an abalone farm off the Korean coast; he tries to persuade her to slow down, but work helps distract her from the death of their son.

In a Brazilian favela, "Nicinha & Jurema" preside over a household brimming with children and grandchildren while dreaming of retiring to the country. Finally, in rural India, "Satyabhama & Satva" eke out a precarious living on a cotton farm threatened by the climate crisis.

If you feel tempted to stop after the Vermont episode of "My Love" — please, don't. "Ginger & David" is certainly a winning portrait of two people who exemplify the best of a certain Vermont culture — stoicism, hard work, resilience, sly humor. But it's only the beginning of what this series has to offer.

While the concept of celebrating elders in lifelong relationships may provoke a big aww, there's nothing cutesy about "My Love." Presented without sentimental framing, these are fly-on-the-wall documentaries that achieve an unusual degree of intimacy with their subjects without milking that intimacy for emotional payoffs.

We see the Ishams reading in bed together, and then matter-of-factly making cremation arrangements. We see several people at doctors' appointments or pre- or post-surgery. We watch Nicinha and Jurema joke about how Jurema misrepresented her smoking habit to the doctor treating her for diabetes. Later, the pair reminisce tenderly about a family member who accepted their same-sex relationship without question.

For these filmmakers, love isn't about grand gestures, despite the occasional anniversary celebration. Love is in the details of a couple's everyday interactions — the reminiscing, the teasing, the bickering and the countless hours of nonverbal communication. "My Love" chronicles all of these with patience and gentleness. The Vermont, Korea and India episodes, in particular, emphasize how the seasonal rhythms of agricultural work keep people connected to the land and each other.

There's no one universal notion of what it means to be a couple, and viewers of "My Love" may find themselves noting cultural, generational and personal differences. But the common denominator is clear: the willingness to undertake a partnership for life.

The series has a travelogue aspect, with each episode showcasing what's most beautiful about its location. Even the urban favelas and a nondescript Japanese apartment block become poetic via panoramic shots or glimpses of Mount Fuji. For all that surface sheen, though, the filmmakers make a point of reminding us that their subjects' "golden years" aren't all golden, whether because of declining health or social conditions or simple regrets.

The Brazil and India episodes, in particular, add a refreshingly direct political aspect. The filmmakers establish that their subjects are poor with a bracing lack of condescension and just enough information to put their stories in context. When Satyabhama and Satva care for their young granddaughter, for instance, it's because her parents had to leave her behind to take factory jobs that pay more than farming. That painful choice in turn results from drenching rains that have devastated the harvest.

"My Love" showcases the parts of romance that rom-coms leave out, the long tail of "happily ever after." While these stories have no meet-cutes and little drama, they might make even a die-hard anti-romantic shed the occasional tear — and reflect on the manifold manifestations of love.

My Love, Don't Cross That River (2014; Kanopy, rentable): "My Love" was inspired by Jin Moyoung's documentary about an elderly couple facing death, a surprise blockbuster in South Korea. The filmmaker also directed episode 4.

"Last Tango in Halifax" (2012-20; Netflix): Two widowed septuagenarians rediscover the love that they never acted on in their youth in this BBC comedy-drama series.

Dick Johnson Is Dead (2020; Netflix): A filmmaker finds unusual ways to grapple with the impending death of her father, who suffers from dementia, in this oddball documentary celebrating family love.