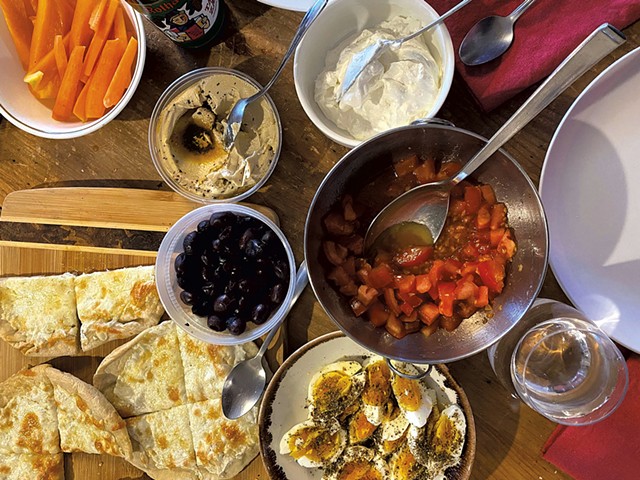 "I DON'T WANT TO MAKE DINNER ANYMORE." When Cara Chigazola Tobin posted this declaration on Instagram in early February, the mother of two from Charlotte echoed what many people were feeling deep into a year of pandemic-related restrictions and stress.

Chigazola Tobin also happens to be chef and co-owner of popular Honey Road restaurant in Burlington. That even she was sick of cooking for her family underscored our collective burnout.

According to a January 2021 analysis by the Hartman Group, a national food and beverage industry consulting firm, cooking and baking at home spiked early in the pandemic. But "these shifts did not last throughout the year as cooking fatigue quickly set in."

During the early months of lockdown, the report detailed, people cooked because they had to. Many also saw it as a way to be creative, build new skills and demonstrate caring.

But the novelty wore off, and as time passed, people found themselves "stretched thin in terms of their time and responsibilities," the Hartman Group concluded.

"Let's be real about it," Chigazola Tobin told Seven Days. "It's not all rainbows and roses all the time, cooking at home."

The chef and her husband juggle care of their 5- and almost-2-year-old sons with her husband's full-time job and Chigazola Tobin's two or three days per week at the restaurant, which is open for takeout Thursday through Sunday. Their older son returned to preschool four days a week in September, but they have not been able to find daycare for their younger child.

Added to the stresses of the pandemic — both personal and business-related — the daily chore of cooking for two picky children has worn Chigazola Tobin down. Not to mention the constant cleanup.

It "just repeats every week, and you're so sick of it, but you're also too tired to do anything about it," she said.

The struggle is compounded by the lack of outside diversions, Chigazola Tobin acknowledged: "It's just being burnt out on everything. It's not being able to do what you enjoy."

Among those who responded to Chigazola Tobin's Instagram post was Breana Killeen, who commented, "Right there with you."

Killeen is test kitchen and editorial operations manager for the national magazine EatingWell — based in Shelburne, where she also lives. The registered dietitian and graduate of Le Cordon Bleu London oversees development, testing and nutritional analysis of roughly 500 recipes a year.

Killeen loves to cook, both for work and for her husband and 16-year-old stepson. In contrast to the detail-driven, methodical approach she must take in the test kitchen, she said, home cooking is about being creative. Pre-pandemic, she would happily go from testing pies and paella all day at work to making an Indian feast for supper at home.

"Dinner used to be my favorite time of the day," she said.

But the pandemic intensified her recipe-testing work — which, for safety reasons, became less of a team project and more of an individual one.

The new restrictions also complicated cooking at home. "Everything was harder. Grocery shopping was harder," Killeen said. "It very much became a chore for the first time."

Despite their burnout, Chigazola Tobin and Killeen still get dinner on the table for their families most nights, they said. To do so, they apply their experience as culinary professionals to the realities of their situation: the time and energy they have to devote to the particular needs of their households.

Here are a few of their best hacks.

Chigazola Tobin makes pancakes for breakfast five days a week. One night, shortly after her "I don't want to make dinner" post, she threw up her hands and made pancakes for supper, too. "The kids were so excited," she said.

One low-fuss, build-your-own dinner in Chigazola Tobin's house is what she calls "Turkish breakfast." Start with purchased ingredients: hummus, olives, Greek yogurt, carrot sticks. Add a few simply prepared items, such as hard-cooked eggs, pita bread filled with mozzarella or fontina cheese and warmed in the oven, and diced tomatoes drizzled with warm olive oil in which you've lightly toasted garlic. Her 5-year-old loves putting his own dinner together.

Killeen relies on what she called "power flavor ingredients" that deliver "a ton of concentrated flavor."

Sun-dried tomatoes in oil, for example, star in a popular five-ingredient EatingWell recipe for chicken cutlets with sun-dried tomato cream sauce. The tomatoes' oil is also used to sauté the chicken.

Orange marmalade is another MVP. Killeen whisks it with soy and rice wine to use in stir-fries or a quick sauce for Asian-style dishes.

Chipotle chiles in adobo and cans of enchilada sauce are powerhouses. Both feature in a layered chicken-and-kale enchilada dish that Killeen developed for the magazine and that has become a family favorite.

Killeen discovered the power of tomatillo salsa through a soup a friend made her. Recently, she threw a jar of the tangy green salsa into her Instant Pot with a pork shoulder. After the meat was cooked, she reduced the juices, added fresh chopped white onion and tossed it all with the shredded pork.

The night Chigazola Tobin made pancakes for her kids, she also made a quick hot and sour soup for herself, as she often does.

She starts with mushroom stock, whisks in a little garlic-chile paste, rice vinegar, ginger and garlic, and brings it all to a simmer. She throws leftover vegetables, and perhaps browned tofu or mushrooms, into a soup bowl. She cracks an egg into the hot broth and stirs "to get the egg situation happening." Then the broth goes in the bowl with a little soy and toasted sesame oil.

Killeen's go-to is "what I call fancy ramen," she said. "I always have stuff on hand to make it."

She gets a jump-start with Shin Ramyun ramen, then adds frozen shrimp and leftover vegetables or frozen green beans. (Both frozen items are staples for her.) Sesame oil and scallions finish it off.