Construction is under way at Middlebury College and Norwich University, where students are hammering their way closer to the dream of “net-zero” living. Their challenge? Design and build two 1000-square-foot homes that run entirely on the power of the sun.

That’s a task handed down by the U.S. Department of Energy, the main backer of the prestigious biennial Solar Decathlon. Perhaps most remarkably, the small Vermont colleges snagged two of just 20 spots in the competition. They’re up against heavyweights — big state universities armed with graduate students and highly technical degree programs.

This year will be Norwich’s first trip to the decathlon. It marks a repeat appearance for Middlebury, which placed fourth overall in the 2011 showing. Middlebury’s earlier entry — called “Self-Reliance” — is now a residence at the college for three students each semester.

Come September, students at both schools will load their houses onto trucks or railcars and transport them to Irvine, Calif., where the houses will be on display from October 3 to 13. The national decathlon dates back to 2002 and has been held every two years since 2005. The goal throughout that decade has been to challenge collegiate teams to design, build and operate solar-powered homes that are affordable, efficient and attractive.

Matt Lutz, an assistant professor in Norwich’s school of architecture and art, says that, while other teams might view the competition itself as the “end game,” Norwich students are using it as the jumping-off point for a bigger crusade for affordable, solar-powered housing in Vermont.

The Norwich team is focusing on affordability and accessibility; it has forgone futuristic building techniques in favor of stick framing, a construction technique already familiar to Vermont builders. The students aim to design a “hammer-ready” solar-powered home that average Vermonters could afford. Delta T-90, as they are calling it, is being designed to maintain a comfortable temperature of 70 degrees Fahrenheit, even when the outdoor temp drops to 20 below zero.

At Middlebury College, students are using this year’s competition as a chance to imagine a solar-powered home in the context of a walkable, tight-knit community. InSite was designed with the home’s future location — on Middlebury’s Shannon Street — in mind. After it returns to campus next fall, the structure will be used for student housing and educational tours.

“We really thought it was important that these houses not just become showpieces,” says senior and project manager Gwen Cook, who studies architecture and Italian at Middlebury, and who lived in the college’s first Solar Decathlon home in 2012. Inhabiting and working on the net-zero homes, she says, “certainly affected how I think about my lifestyle, and I certainly hope that we’re able to inspire other people to do the same.”

At Norwich, meanwhile, Lutz is optimistic that solar homes like Delta T-90 and InSite won’t be relegated to the confines of innovative competitions for long.

Lutz hopes the Norwich house helps jump-start a conversation about, and transition to, better residential construction in Vermont — and soon.

“It’s off the shelf, it’s hammer ready and in some ways it’s inevitable,” Lutz says. “We have to start doing this.” 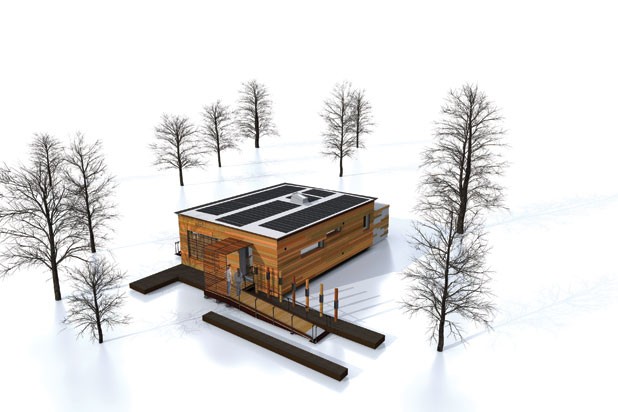 The cost per square foot — $150 — is low enough that a household of two individuals working full time at minimum wage could afford the home.

Widely available local materials — such as regionally harvested northern white cedar for the outside walls — keep costs (and carbon footprints) down.

The solar photovoltaic array adds between $20,000 and $25,000 to the total cost of the house — but eliminates heating and other utility bills in the process.

The streamlined floor plan (and nine-foot ceilings) makes the 1000-square-foot house feel bigger than it actually is.

The Norwich students collaborated with modular manufacturers Huntington Homes, so their design could theoretically be rolled out on a larger scale in the future. 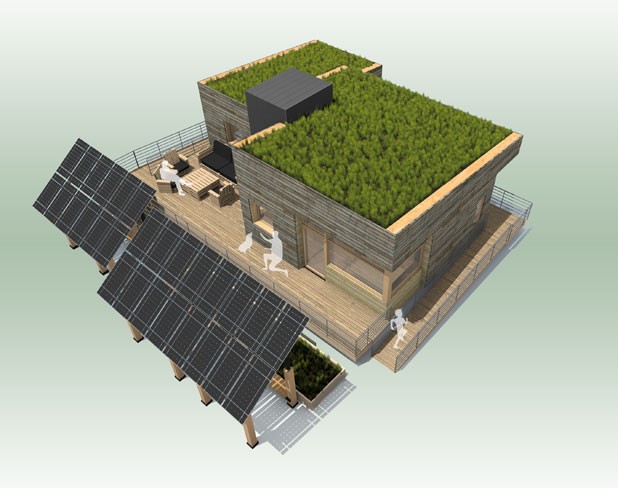 The cost per square foot is roughly $250.

Fourteen inches of insulation will help the house retain heat during the winter. The insulation relies on recycled materials, including blown cellulose (composed of old newspaper treated with a fire retardant) and denim.

To cut down on fossil-fuel use when it comes time to ship the house to Irvine, Calif., students designed it to be shipped by rail. The house is constructed around an internal steel frame, surrounded by 34 floor, roof and wall panels that can be broken down and loaded into shipping containers.

Recycled barn wood makes up the exterior siding. A green roof provides additional insulation for the home and filters rainwater and runoff.

Twenty-six solar panels power the home, and the “solar pathway” encourages passersby to interact with the technology on the ground while also demonstrating the flexibility of solar panels in home design.