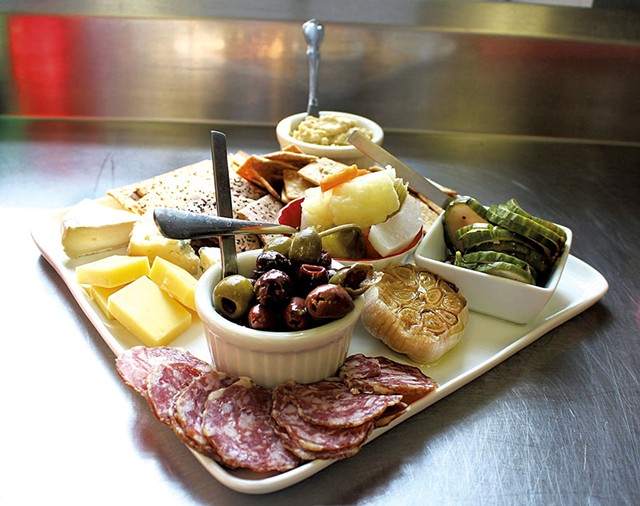 After closing for kitchen renovations in late September, Royalton's the Fox Stand Tavern & Catering (5615 Route 14) reopened for regular business before Thanksgiving. A well-loved watering hole since the early 1800s, the tavern stood empty for almost 10 years until chef Jed Cohan moved his Delicata Catering business into the space in summer 2014. He opened the tavern last January with a well-crafted locavore menu of arancini, empanadas, pizzas and dinner plates such as grilled ribs, roast chicken, and baked polenta with wilted greens and red sauce.

Though he insists the reopening isn't "a big thing," Cohan has installed additional plush seating and tweaked the menu. He plans to debut brunch service soon and has reintroduced the popular hand-ground burger, which he shelved this past summer after continued issues with the ventilation hood. "We're always revising the menu and trying to get it to what the people here want," says the chef, who took charge in the kitchen following the departure of opening chef Ted Ask.

Cohan says he reformulated his vision for the restaurant after realizing that locals had their own ideas about what the historic venue was and should be. "People have a real sense of ownership about this place," he says. "We have an obligation to what it is. It's a tavern and a meeting place, and people want quality food and caring."

Now, with winter approaching and catering season dying down, Cohan says he's excited to focus on the tavern — and to serve a trailblazing crowd once the snow flies. The tavern is located on a Vermont Association of Snow Travelers trail, and the chef is working with South Royalton's Ridge Climbers Snowmobile Club to ensure ample sled parking, along with signage that will welcome riders inside to warm up over a snack or beverage. "There's this perception that the restaurant is fancier and more expensive than it is," Cohan says, noting that beers are priced at about $6 per pint and most entrées ring in at less than $20.

The original print version of this article was headlined "Royal Flush"