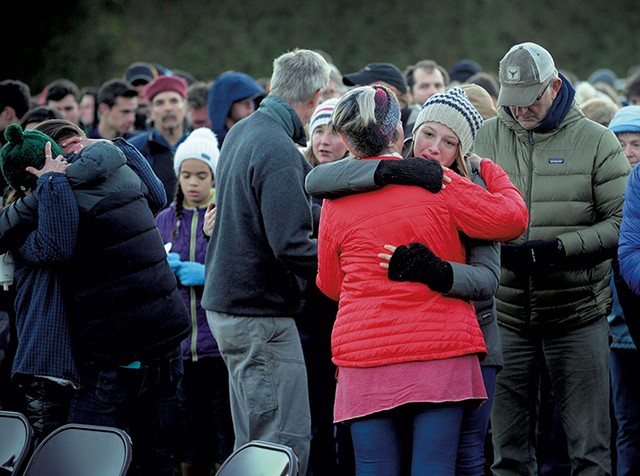 Recent news that the drivers in two deadly crashes had used marijuana is adding fuel to the ongoing debate over whether the drug should be legalized in Vermont.

Wrong-way driver Steven Bourgoin had THC, the psychoactive ingredient in marijuana, in his system when he slammed into a car carrying five Mad River Valley teenagers last year on Interstate 89, killing all of them.

And Steven Holmes had THC in his system when he drove across the center line on Route 22A in Bridport on August 7 and struck an oncoming truck, killing himself and three passengers in his Volkswagen Beetle. Marijuana might have been a factor, along with speed and fatigue, according to a state police report on the crash.

News of the Bourgoin toxicology report, which VTDigger.org reported last week, drew strong reactions. Pro-legalization forces insisted that marijuana was likely not a key factor, while others worried that it was. According to the state police, Bourgoin had 10 nanograms of THC in his blood eight hours after the crash. That's twice the legal driving limit in Colorado, where recreational marijuana is legal.

"To suggest that this accident wasn't caused by marijuana use was, I think, denying the obvious," said Rep. Ben Joseph (D-North Hero), a former Superior Court judge. Legalization would expand ready access to marijuana, increasing highway crashes, he predicted: "I just think it's going to be a terrible price."

Lt. Gov. David Zuckerman, a longtime legalization advocate, disagreed. Bourgoin also had the opioid fentanyl and an antianxiety prescription drug in his system, according to the police report, and had recently gone to the hospital emergency room with possible mental health problems.

"It is quite clear that [Bourgoin] had a tremendous number of issues," Zuckerman said. "I cannot say that cannabis did or did not have anything to do with that crash. What I can say is that other factors contributed significantly greater to that tragic accident. Part of this whole discussion is putting all of these things into perspective. When we start going down the Reefer Madness path, it immediately calls into question the validity of the argument being made."

The revelations about these crashes come as the push for marijuana legalization in Vermont has gained momentum, and advocates appear to be closer than ever to their goal. But the fear that legalization would lead to more driver-impaired accidents has long been an issue.

Last month, Vermont Department of Public Safety Commissioner Thomas Anderson said more highway deaths would result from legal use of cannabis. He made the prediction during a meeting of the Governor's Marijuana Advisory Commission, which is charged with studying the impact of legalization.

Advocates for legal marijuana insist that the research tells a different story and that the study commission — appointed by Gov. Phil Scott after he vetoed legislation that would have legalized marijuana — is biased.

"There's scant evidence to show that cannabis consumption alone leads to increased crash problems," Zuckerman said. The commission, he added, is "ridiculously stacked" against what he termed "cannabis reform."

The available scientific studies have not led to consensus. People on either side of the debate argue about the current research and what it means.

Anderson chairs a subcommittee of the governor's commission that reviewed at least eight studies, including research that looked at national data as well as recent trends in Colorado and Washington State, which have both legalized pot.

"We tried to pull out the best data we could find, the best research we could find," he told Seven Days. "I thought the data supported the conclusion that you will have increased fatalities on the roadways."

The subcommittee cited a 2017 National Academies of Sciences, Engineering and Medicine study that concluded there is "substantial evidence of statistical association between cannabis use and increased risk of motor vehicle crashes."

The committee also cited a Rocky Mountain High Intensity Drug Trafficking Area report from law enforcement agencies that compared marijuana-related traffic deaths in Colorado before and after the drug became legal there in 2014. There were 55 fatalities in 2013, which more than doubled to 125 deaths in 2015, the group found.

But critics of that report say the presence of marijuana in test results does not mean it caused crashes. They also say the analysis was produced by a biased police group.

"It's a document that is designed to mislead people and to support continuing prohibition," said Matt Simon, New England political director and legislative analyst for the Marijuana Policy Project, a national organization lobbying to legalize marijuana.

The Vermont subcommittee noted that there are nuanced and differing views on crash data. A 2017 study in the American Journal of Public Health concluded that changes in motor vehicle fatality rates in Colorado and Washington since legalization are not statistically different from rates in states where it is not legal, for example. And factors such as texting while driving must be considered along with marijuana laws.

Vermont's own data show mixed trends since 2013, when the state decriminalized marijuana by allowing possession of small amounts with no criminal charge. Worries that even this half-step toward legalization would cause a spike in traffic deaths have so far not been borne out. Overall traffic fatalities in Vermont declined from 77 to 62 between 2012 and 2016 and are nowhere near the record 161 deaths logged in 1979, according to the Vermont Agency of Transportation.

Still, fatalities are trending up this calendar year. As of December 4, Vermont had logged 67 traffic fatalities, compared to 57 on the same date in 2016. And, looking at all crashes, it appears that cannabis is present more often. In the three years leading up to decriminalization, there were 71 crashes in which at least one driver was reported to have cannabis in his or her system, compared to 91 in the three years after, according to the marijuana commission's roadway safety report.

And when fatal crashes do occur, impairment from drugs, alcohol or both is a significant and growing factor, according to the same state data, accounting for more than half of highway deaths in 2016. But the data show that alcohol alone is the leading cause, although it is often present in concert with marijuana or other drugs.

Another big question: To what degree does the presence of THC, which stays in the body for long periods of time, indicate impairment? Some speculate that regular users with relatively high levels of THC aren't necessarily heavily impaired, while others debate that.

Colorado's DUI standard for nanograms of THC is arbitrary and unscientific, and other states should not set similar limits, said Simon of the Marijuana Policy Project.

Blood tests can be a useful factor in evaluating impairment, Simon said, but police need training to also consider a broad range of factors in drivers who are suspected of impairment. These include traditional sobriety measures, such as assessing the ability to walk and talk.

Research does seem to be clear that marijuana and alcohol affect driving in different ways. Marijuana tends to slow reflexes and response time and, in some cases, causes motorists to drive more slowly — and possibly be less alert. Alcohol tends to be associated with riskier driving maneuvers, speed and loss of control.

Both proponents and critics of legalization acknowledge that people are driving under the influence of pot now and that, regardless of what Vermont does, neighboring Massachusetts will allow retail sales of pot next summer, right over the border.

Gov. Scott declined to comment for this article. On Vermont Public Radio last Friday, he reiterated support for a bill that would legalize possession of up to an ounce of pot and a few plants. But driver impairment issues deserve a comprehensive look before the legislature considers allowing retail sales, he said.

Scott remains concerned about driver safety, and his position has not changed since his veto last spring, according to Rebecca Kelley, the governor's communications director.

Zuckerman, for one, believes that full legalization will help increase tax revenue to combat impaired driving of all kinds with more public health campaigns and additional law enforcement on the roads.

"We are not seeing radical rates of cannabis-caused accidents relative to the consumption of cannabis in our state. Whereas, with alcohol, we see copious problems," Zuckerman said. "I would argue that we should increase our patrols for all of the above, rather than bury our heads in the sand and have responsible users today be treated as criminals."