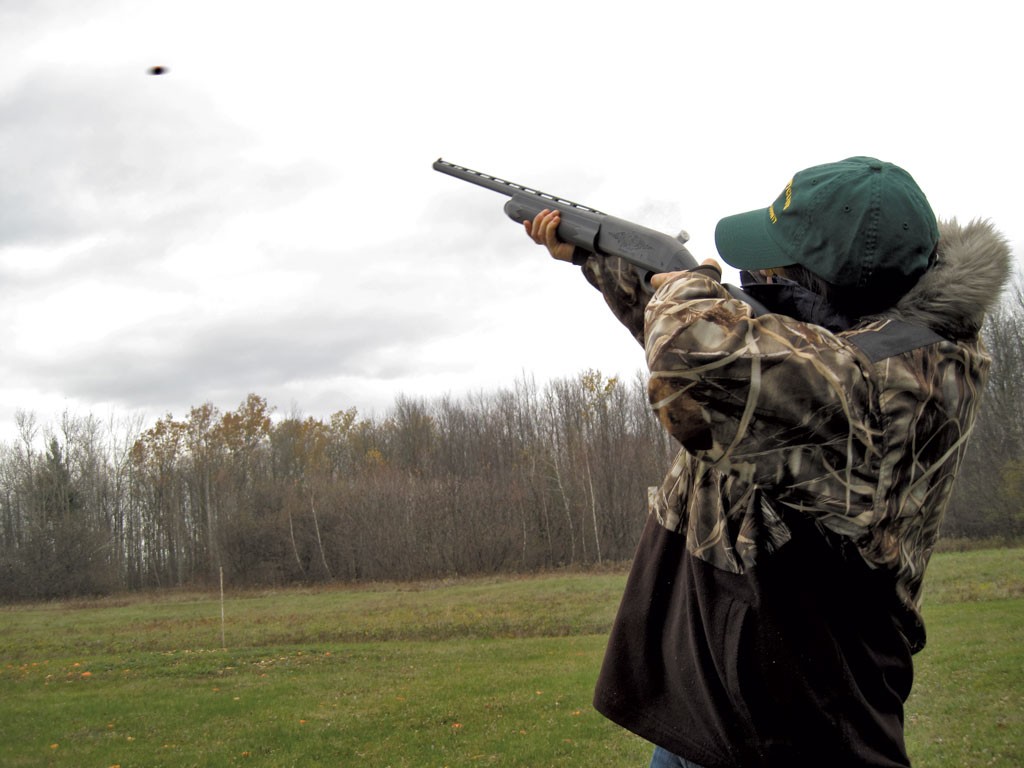 The heart of the Sportsman's Club of Franklin County is a small, uninsulated shack that sits at the edge of a reedy, weedy expanse, across from the much larger clubhouse proper. Its one wide window looks out on several of the club's shooting ranges, but the view isn't the main reason members gather in this scaled-down structure. They come to eat doughnuts, strap on their ammo bags and swap stories. Resting against the wall, a handmade sign spells out a message in spent shotgun shells: THINK GUN SAFETY.

In the corner, a metal folding chair supports a Crock-Pot of beef stew that beckons hungry shooters, even newcomers like me and my coworker, Courtney Copp. Neither of us has ever fired a gun before, but we're here, at the invitation of Courtney's longtime friend Ricky Blondin, to shoot some skeet.

Despite being a native Vermonter, I always assumed that, when it came to guns and hunting, I'd remain on the outskirts of this centuries-old culture.

In the 1950s, my maternal great-grandparents bought a hunting camp in Underhill, which remained in my family until recently. Every year since I was a kid, my male relatives have disappeared into the woods and emerged with tales of bagged bucks, near misses and everything in between. The closest I ever came to hunting was posing in the back of a pickup with a just-killed buck.

Then there was the Christmas Eve I stared down a frozen duck — a mallard my cousin planned to have stuffed and mounted. After a few too many eggnogs, he retrieved the bird from the basement freezer and set it down on the kitchen table next to the baked Brie. Its newspaper swaddling unwrapped, the duck had feet the most vivid shade of orange I'd ever seen.

Besides having a few close encounters with carcasses, I knew my way around guns. My father collected antique shotguns, and Uncle Jim, a hunter and fisherman, always has the latest gear — including a bolt-action rifle that I held a couple years ago. It wasn't loaded, but handling it triggered an unsettling mix of fear and fascination.

My Uncle Jim's basement is a man cave affectionately dubbed "the Bench" after the converted workbench that serves as its centerpiece. One frequent visitor there is accomplished hunter Ricky Blondin, and it was in the basement that Ricky and I had a conversation about skeet shooting that shifted my perspective on guns.

Learning about the mechanics of the sport sparked my curiosity and revived the retired athlete in me. Could I hit two birds with one stone — pun intended — and tap into my latent competitive spirit while overcoming my fear of guns? I was eager to try. Ethan felt the same way, so we headed off to the club, where we found Ricky a willing teacher.

Unlike Courtney, I grew up in the suburbs, disconnected from and largely oblivious to the culture of guns and hunting. The only target practice I ever get is when I use a spray bottle to shoo my cats off the counter, and even then my aim isn't very good. So I'm a little uneasy about picking up an actual shotgun.

Despite our greenness, we're quickly made to feel at home at the Sportsman's Club of Franklin County. (Besides a helping of stew, we receive excellent SCFC caps.) Turns out, this is a very friendly place to learn to shoot.

Members of the club — which has occupied its location in St. Albans Bay since 1947 — have had plenty of practice in introducing rookies to shooting shotguns, rifles, pistols and arrows. Ricky tells us he picked up skeet shooting as a hobby when he quit drinking 24 years ago; now, he's an ambassador for the club and the sport itself.

Courtney and I confirm our inexperience by both jumping the first time we hear a shotgun blast. At somewhere between 120 and 140 decibels, those things are loud. So we're grateful for the complimentary earplugs, which we grab from the plastic jar beside the doughnuts.

Though dense woods surround the club, a few farms and residences stand nearby, so shooting hours are limited to Thursdays and Sundays during daylight. Members and guests visit the SCFC year-round. Neither snow nor rain nor cold can keep them from firing off their appointed rounds. And if they can do it, so can we.

After delivering a brief but thorough introduction to gun use and safety, Ricky gives us each a box of 20-gauge shells, which we empty into our borrowed ammo bags. He explains that this caliber of ammunition is good for beginners, because it neither demands great precision nor produces a mighty recoil.

Though I've never loaded a gun in my life, I take to the task quickly. But that's the easy part. Hitting a zooming pigeon is far more challenging.

Many skeet shooters use the sport to hone their hunting skills; that's why the flying targets are called "pigeons." Manufactured to a standard 108-millimeter diameter, these bright orange, biodegradable clay discs are launched into the air at about 60 miles an hour, Ricky says.

Even with the wide spray of pellets afforded by a shotgun shell, these miniature flying saucers are not easy to hit. Courtney and I are astonished that we shatter any of them. The few that we hit are easily replaced: The club's outbuildings are crammed to the rafters with boxes of pigeons waiting to be launched.

The "High" button launches a target from the "high house," an enclosed tower with a launching window set 10 feet off the ground; the window on the "low house" is about chest high. Hitting "Doubles" launches two pigeons simultaneously from opposite directions, challenging the shooter to adjust his or her aim quickly.

Shooters move as a group around a semicircular course of eight stations, taking a predetermined number of shots at each stop. A round consists of 25 shots — the number of shells in a box of ammo — and each shooter keeps a tally of hits and misses.

The SCFC has two fields for skeet shooting and a third dedicated to trap shooting. This variant allows up to five shooters to stand side by side, guns aimed in the same direction. Some 30 feet in front of them, a low, wide bunker protrudes a few feet above the ground; inside it, a launcher fires pigeons in a straight line away from the shooters. Directly in front of each shooter is a microphone; yelling "Pull!" (or, as we learn, yelping in celebration of a successful shot) sends a single pigeon flying, courtesy of voice-activation wiring.

I'm astounded to see that Ricky and other club members — often literally shooting from the hip — blast the pigeons without the meticulous preparations I must employ. Before every shot, I have to concentrate on properly positioning my legs, hips, shoulders, elbows, cheek, hands and eyes, not to mention the angle and height of the barrel and the projected trajectory of the pigeon. My dozen or so successful shots are, I believe, more the product of dumb luck than of skill. But I'll take 'em.

While Ethan chalks up his hits to luck, I'm going to claim that my eight are the result of being in the "zone." However you look at it, skeet shooting requires what Ricky repeatedly refers to as "an attitude adjustment." In other words, check your ego at the door.

I learn this important lesson with my first shot — a blast that leaves a lemon-size welt just below my left armpit. As Ricky promised, the recoil isn't bad, but it turns out that a 20-gauge shotgun leaves its mark when it's not properly placed on the shooter's shoulder. I play through the pain, as they say, celebrating the hits and bemoaning the misses — all 42 of them.

Along the way, I observe the reverence that Ricky and his friends have for guns, hunting and skeet shooting. Patient and humble, they are quick to embrace us, whispering words of wisdom when teaching moments arise. These men have allowed us to join their ranks, if only for an afternoon. And when I scream a little too loudly each time Ethan or I pulverizes a pigeon, they just smile and nod their heads.

A couple of days after our trip to the Sportsman's Club of Franklin County, I miss an early-morning phone call from Ricky. In his message, he praises my efforts, inquires about my sore shoulder and says, "You're on your way to becoming a great shot ... in 10 years!"

I'm returning to the club soon and plan to prove him wrong.