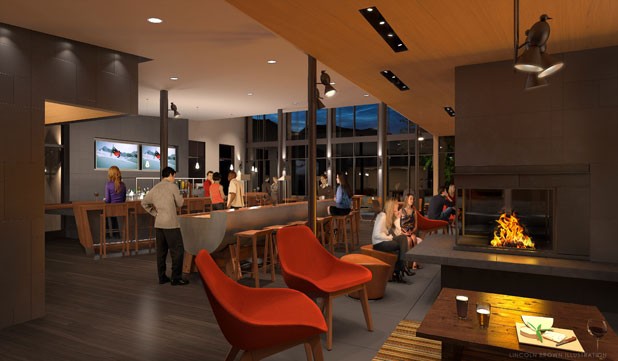 Following a multimillion-dollar renovation, Topnotch Resort & Spa in Stowe will reopen its doors on June 28. Guest rooms and the lobby overlooking Mt. Mansfield have been overhauled for a rustic-chic vibe. But the tastiest news is that the resort’s former restaurants, Norma’s and Buttertub Bistro, have been replaced by new eateries Flannel and the Roost.

Executive chef Steve Sicinski says it was “a no-brainer” for management to expand dining at the resort, where restaurants had been exceeding capacity whenever the hotel was full. Now, even in busy times, Sicinski hopes to be able to serve every guest. The Roost, located in the all-new lobby area at the front of the building, is significantly larger than Buttertub Bistro and includes a 70-seat patio with a fire pit and bocce area.

Inside, the Roost boasts a 16-foot, Shelburne-crafted shuffleboard table on which guests can both eat and play. With 10 beers on tap and more in bottles, Sicinski says he hopes the Roost “will grow into our adult-type restaurant.”

The menu reflects that refinement with a sense of the playful. It opens with a lengthy small-plates section titled “Nibbles Bits Binge.” Dishes include fennel-and-farmer’s-cheese pierogi with anise-onion cream; fried avocado with gingered seaweed in cashew sauce; and margarita-inspired fries with lime salt, tequila salsa and smoked mozzarella.

Other sections on the expansive bill of fare include meat and cheese boards, sandwiches (some filled with chicken thighs or roasted porchetta) and main dishes such as spicy-corn udon soup with diver scallops or smoked kielbasa with kimchi kraut.

Flannel now fills the space formerly occupied by Norma’s. Though it’s the resort’s more family-friendly option, the upscale destination does not lack for sophistication. The concise dinner menu offers a mix of local ingredients and excellent foodstuffs from farther afield. Cases in point: the selection of seafood, including red-crab fritters (served as either a starter or side); and the crispy oyster BLT appetizer. Entrées include Misty Knoll Farms chicken with sweet-pea spaetzle; and the Flannel burger, topped with local cheddar, crispy pork belly, an egg and Heady-Topper-glazed onions.