Before Val Elliott attended college in New York City, her familiarity with "ethnic" food was limited to that of her Italian heritage and the Greek cuisine of a family friend.

"I was in college before I had nachos," admits the St. Johnsbury resident, who grew up in the Hudson Valley.

Elliott's 5-year-old daughter, on the other hand, is already developing a more nuanced palate. For one thing, she likes chicken curry. Elliott learned how to make it from Hend Al-Raimi, a native of Yemen who now lives in Danville.

Al-Raimi and Elliott, both 38, met in the summer of 2017 at the Danville Farmers Market and discovered they had some things in common: Both grew up in households in which yelling was a form of affection. Both lost a parent when they were in their twenties. And both found a love for food and cooking at a young age.

On Sunday, February 17, the two will offer their second Middle Eastern dinner at Bread&Butter in St. Johnsbury.

Their first pop-up, a reservation-only dinner held at the same venue last fall, sold out. That response was a testament to the reputation that Al-Raimi and Elliott had earned from selling falafel sandwiches and chicken curry with rice at the summer farmers market.

Bread&Butter co-owner Elise Nickerson said she offered the women use of her café because she wanted to see more good food in town.

"We're just trying to bring really high-quality food that comes from a variety of ethnicities and backgrounds," she said. "We don't have a lot of different foods in St. Johnsbury. So anything that's a little bit different is highly sought after."

Elliott estimated that she and Al-Raimi sold food to about 350 people during the town's First Night celebration on New Year's Eve. Though cooking for that many was exhausting, Al-Raimi said, she enjoyed the experience. Of her partnership with Elliott, she noted: "I feel we complete each other. We were friends, but now I feel we become best friends."

Elliott said that when she first met Al-Raimi, she worried that the headscarf-wearing Muslim woman would judge her: It was summertime, and Elliott's clothing revealed more skin than did Al-Raimi's.

But how an individual chooses to dress isn't important, Al-Raimi said: "I like or dislike people because of their behavior, their hearts."

Conversely, she was concerned about what her new Vermont neighbors would think of her. Al-Raimi and her family moved to the U.S. in November 2016 via Jordan to escape the war in her native country. The parents of her American-born husband had built a house in Danville, which the couple has since bought from them. Al-Raimi's headscarf, or hijab, is a visible marker of her identity as a Muslim in an area that has little cultural diversity. 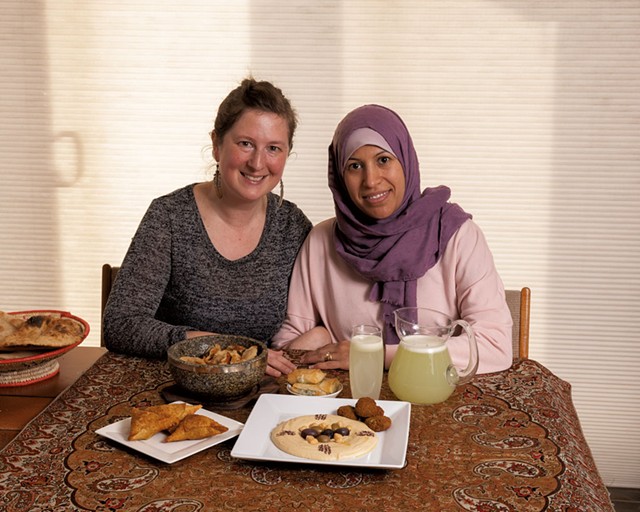 "I was afraid a little bit, in the beginning, people will not treat me in a good way," she said. Her family arrived in the country just days after Donald Trump was elected president, she noted.

But Al-Raimi's worries were largely unfounded. She said her neighbors have been welcoming and have wanted to learn more about her and her culture. The children from her daughter's school and karate class, in particular, have been curious about her headscarf.

Elliott said her Yemeni friend has shown her nothing but acceptance. "In our friendship, we can ask each other anything," she noted. "We know that we will be answered with love and honesty and no judgment."

The women's mutual respect is reflected not only in their personal interactions but in their decision to use only halal meat — that is, animals slaughtered in an Islam-prescribed ritual. That way, they can share any leftovers.

In addition, Elliott and Al-Raimi do not serve alcohol at their pop-up dinners or allow patrons to bring their own.

"Maybe I lose out on a couple of customers that don't make reservations," said Elliott, "but that's OK."

Some men who called to inquire about the first pop-up, she added, hesitated when told about the no-alcohol policy. But their wives would interject and say, "It would be good for you not to drink for a night," Elliott recalled.

For Al-Raimi, it's not just about observing a religious dietary restriction. It also ensures that diners will enjoy an authentic Yemeni dining experience. Elliott noted that diners appeared to appreciate the fresh lime juice they were served midway through the three-hour meal.

At Nada Market in Winooski, the women found chicken and tea, as well as feta cheese to make the tangy filling for spanakopita, a flaky spinach-and-cheese pastry.

They had planned to serve lamb stew, but their supplier at Brixton Halaal in Burlington had run out, so they settled for goat. As Al-Raimi scoured the aisles of Burlington's Central Market: Taste of Asia for curry powder, Elliott did mental calculations to figure out the best deal on chickpeas.

"With food, you're thinking about margins," she said. "If we're spending too much on ingredients, then we're not going to be able to continue." That said, Elliott stressed that it's important to use quality ingredients.

Though the greater Burlington area has a wide selection of specialty ingredients, Al-Raimi hasn't found a substitute for certain things. One of them is the mélange of seven spices that is commonly used in Yemen, she said. Her mother brought her a supply last summer when they met up in Jordan. Al-Raimi generously shared the treasure with another Yemeni family in Vermont.

Though she's the Middle Easterner, Al-Raimi said she's happy to let Elliott design the menu for their pop-up dinners; she'd rather focus on making the food. "Val knows what people like," Al-Raimi said.

Indeed, Elliott puts a lot of thought into crafting a Spice Box dinner. Everything Al-Raimi makes is delicious, she explained, but they don't want to overwhelm their patrons' taste buds. Even adventurous diners want something recognizable. Then again, some dishes, such as a soft cheese dip, are not different enough, she noted.

"Every plate that we bring out," Elliott said, "I want it to somehow make the next thing shine."

Local diners might not be ready to try offal, though. Elliott suggested they might be able to serve it as a small side dish in the future.

Spice Box is not just about Middle Eastern food. The entrepreneurs have received an order for a small dinner party at which they'll serve Sicilian food. Elliott said she's excited to teach Al-Raimi how to cook food from her culture.

At the height of summer tomato season, the women might offer more Italian dishes. Or Al-Raimi might whip up the Korean appetizers that she has learned about from her father-in-law. Adding cakes to the menu is another possibility; Al-Raimi is already experimenting with different types of fondant.

Still, their families remain the priority. With two young children each, the women don't have the time or energy to run a full-time business. The pop-up model suits them just fine — although Al-Raimi thinks it might be nice to have a food truck.

For Elliott, Spice Box is more than just a business; her friendship with Al-Raimi has enlightened her, she said, and she hopes that others will have the same experience through their culinary adventures.

Learn more or make a reservation for a dinner at valelliott80@gmail.com.