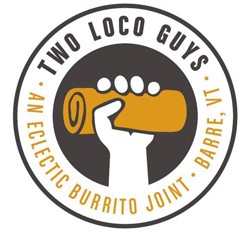 Barre has long been a city where most fast-casual options are decisively of the pizza-and-sub variety. But next Monday, January 20, 136 North Main Street will get a much-needed global shot in the arm when Two Loco Guys opens there.

According to Keith Paxman, co-owner with Rich McSheffrey of the new restaurant and Barre’s Cornerstone Pub & Kitchen, the lifelong friends are seeking to add variety to the downtown scene.

Guests can also sit down at the 24-seat venue with a wrap or bowl of protein and veggies made to their specifications.

Two Loco Guys owes that menu flexibility in part to its location in the front portion of Cornerstone’s catering kitchen. Paxman and McSheffrey recently purchased a catering truck to transport food to event locations. Come spring or summer, they may make the vehicle do double duty as a food truck, bringing Barre’s favorite dishes beyond North Main Street.

Fans of the duo’s fare can look for updates on Facebook, both about the food truck and about Two Loco Guys’ soft opening featuring free burritos. Paxman says he’ll announce a date this week between Wednesday and the following Monday.

The original print version of this article was headlined "Loco Flavor"