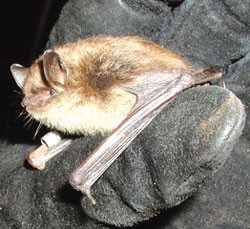 There’s a glimmer of hope for Vermont’s struggling bat population, which has been decimated by a poorly understood disease. According to a state wildlife biologist, the Agency of Natural Resources is moving ahead with plans to list both the little brown bat and the northern long-eared bat on the state’s endangered species list. Two other bat species indigenous to Vermont, the Indiana bat and small-footed bat, are already on the list.

The little brown bat population has declined by 85 to 95 percent since January 2008, when white-nose syndrome first appeared in Vermont; the northern long-eared bat has been hit even harder. The lethal fungus, first identified in 2006 in a cave about 40 miles west of Albany, N.Y., has killed off millions of bats nationwide, including more than a half-million in Vermont alone.

Scott Darling, a wildlife biologist with the Vermont Fish & Wildlife Department, says that protecting the little brown bat is particularly challenging because of its frequent encounters with humans in homes, apartments, garages and barns.

“If you woke up in the middle of the night with a bat on your arm, you could collect it for rabies testing,” says Darling, meaning the bat likely would be euthanized. “That’s the challenge we have with the little brown bat that we don’t have with most other endangered species in Vermont.”

Biologists are closer to understanding the deadly fungus and have even identified an agent that kills it in the lab. The challenge, Darling says, is in figuring out how to apply the fungicide to hibernating bats without causing them further harm. When bats are roused during their hibernation, they tend to burn off their fat reserves and can die in the process.

Darling says Fish & Wildlife has been actively reaching out to town health officers, pest-control agents and municipal animal-control officers to minimize the unnecessary killing of these creatures.

How will Vermont’s severely reduced bat population impact that of the state’s insects? “That’s the big question,” says Darling. “We’ve chosen to put our limited financial resources into finding a cure rather than studying its implications.”