Two in One: Haymaker Bun Co. and Arcadian to Share Middlebury Space 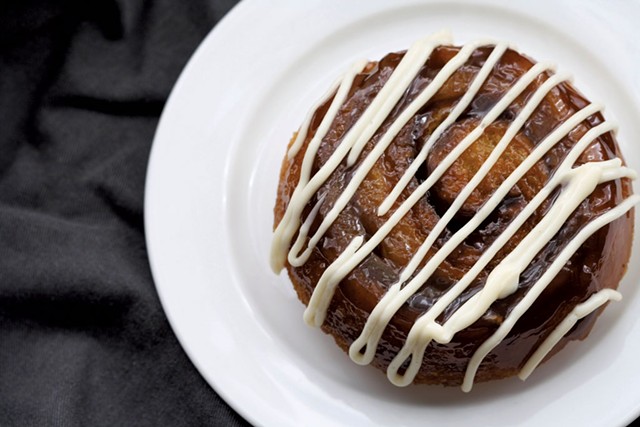 When Caroline and Matt Corrente open their Middlebury business in November, it will embody a model unusual in the food industry: two restaurants in one. The married couple will share the riverside restaurant space at 7 Bakery Lane, where Caroline will operate Haymaker Bun in the morning and Matt will run his new Italian restaurant, the Arcadian, in the evening.

"It's two separate businesses operating out of the same location," Caroline explained. "And we just happen to be married to each other."

The couple is remodeling the building that most recently housed the Lobby, a burger restaurant founded in 2014 by late restaurateur Michel Mahe. For the first half of the day, the space will function as a bakery for Caroline's Haymaker Bun, which she started a year and a half ago in the couple's Middlebury home. The counter-service business will serve her buns and pastries with coffee and espresso from Brio Coffeeworks in Burlington, she said.

Later in the day, the butcher-block counter where Caroline will roll out her buns will transform into Matt's workstation, where he will make pastas for the Arcadian.

"Happy carbs all around," Matt said.

The couple met working at Pistou, a now-defunct restaurant on South Champlain Street in Burlington. Matt, 34, is a graduate of Middlebury College; Caroline, 28, graduated from the University of Vermont. Each later pursued studies in the culinary arts, Matt at the Institute of Culinary Education in Manhattan and Caroline as a pastry student at Le Cordon Bleu in Paris.

In New York, Matt worked for restaurateur Daniel Boulud; in Vermont, he most recently served as chef at Two Brothers Tavern and opening chef at Notte, both in Middlebury. He left that dual position at the end of August to open the Arcadian, his first restaurant as chef-owner.

His menu will feature handmade pasta, fresh seafood and local produce. The Arcadian "will allow people to have an Italian food experience that doesn't currently exist here," Matt said. "We're just really excited to be able to offer these kinds of things at an affordable price point."

The Arcadian will seat about 85 people inside, including 10 bar seats, with an additional 35 seasonal seats on the patio overlooking Otter Creek. Both Haymaker Bun and the Arcadian will be open Tuesday through Saturday, with bakery hours from 7:30 to 11:30 a.m. and dinner service starting at 4:30 p.m. The two will collaborate on Sunday brunch with a family meal.

Of the sharing arrangement, Caroline said, "It will allow us to pass our 18-month-old son back and forth to each other."