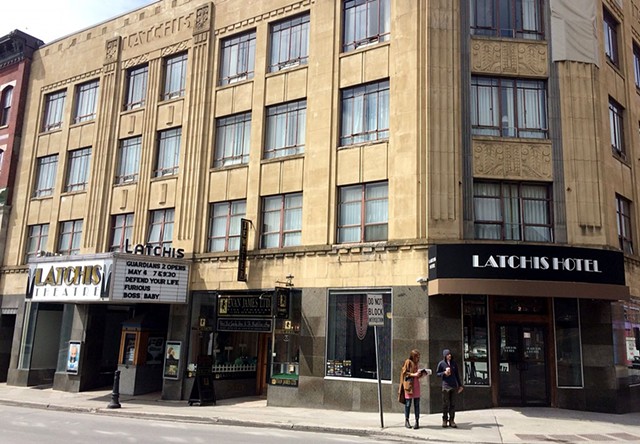 Among Brattleboro's landmarks is the Latchis Hotel and Theatre, a 1938 building at 50 Main Street that houses four theaters, including a 750-seat venue, plus the 30-room hotel. As of early next year, the building will also be home to two dining-and-drinking establishments, Latchis Pub and Latchis Underground.

"It's a cool location, and obviously the connection with a hotel and movie theater is great for all of us," said Jon Potter, executive director of the nonprofit Latchis Arts and its commercial affiliate, Latchis Corporation.

The new businesses, currently under renovation, will be owned by southern Vermont restaurateur David Ingerman of Chittenden. He already co-owns Ramunto's Brick Oven Pizza restaurants in Brattleboro and Keene, N.H.

Ingerman, 61, said he plans to open his Latchis businesses in late February. The pub, on the ground floor of the historic building, will serve beer, wine and bar fare, including hot and cold sandwiches, soups, and salads. It will be open daily starting at 11 a.m.

The downstairs lounge, Latchis Underground, will serve buffet dinners on Friday and Saturday nights and present live music shows. Occupying a room of about 90 by 20 feet, it will be set up in a speakeasy style.

After two seatings of the weekend buffet dinners, at 6 and 7:30 p.m., the lounge will be open for drinks, pub fare and music. When not in use, the space will be available to the public, said Ingerman: "If they patronize the restaurant upstairs, they're free to use the room."

Ingerman described the lounge as a "bluesy, singer-songwriter"-type bar that will appeal to the "artsy crowd" in Brattleboro. He hopes to draw "a broad mix of the community," including local businesspeople and moviegoers as well as tourists, he said.

The original print version of this article was headlined "Latchis Eats"