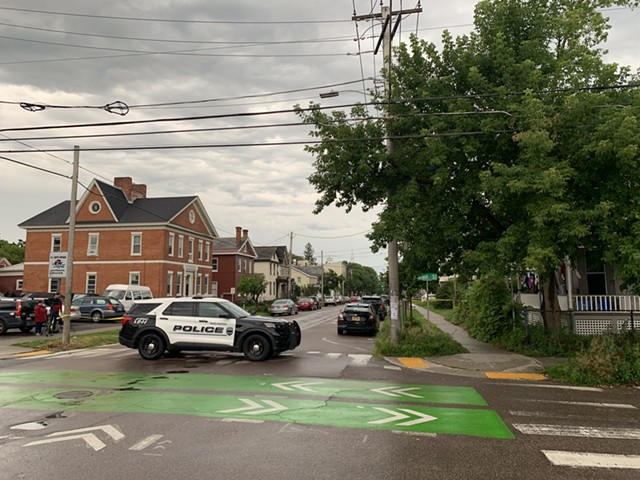 A man forced his way into an apartment in Burlington’s Old North End early Monday morning and shot two women inside before killing himself, police said at a press conference later in the day.

One of the women, 22-year-old University of Vermont student Kayla Noonan, died at the scene. The other woman, 22, was shot twice and is in critical but stable condition at the UVM Medical Center, acting Police Chief Jon Murad said. Police did not release the surviving victim’s name.

The man who police say shot the women is 27-year-old Mikal Dixon. He was armed with what Murad described as a short-barreled, AR-type rifle. Dixon knew both victims and had a relationship with Noonan “going back several years,” according to the chief.

“The nature of the relationship isn’t exactly clear at this moment,” he said.

Officers arrived shortly after neighbors reported gunfire around 2:30 a.m. inside the lower unit of a duplex at 47 North Winooski Avenue. Murad said Dixon and Noonan were dead when officers entered the apartment. The surviving woman was still on the phone with emergency dispatchers but was “close to death” from two gunshot wounds, the chief said.

He credited officers and emergency responders from the Burlington Fire Department with saving her life.

The cops’ initial account of the murder-suicide was based in part on statements the surviving victim made as she lay critically injured. The woman, who resided at the apartment, told police that Dixon had tried to enter through a locked door and eventually broke a window to get inside. He first shot Noonan, then her, Murad recounted.

Dixon was allowed to purchase and possess firearms, as far as police know. He had a history of low-level criminal allegations and unrelated, inactive restraining orders, Murad said. Seven Days could not confirm those details Monday evening.

The chief said Dixon was a resident of New Hampshire but had grown up in the Burlington area and attended Burlington High School. In a statement about the killing, UVM president Suresh Garimella described Dixon as a “formerly enrolled student.”

“I ask you to join with me in supporting and caring for one another in the wake of this tragedy,” Garimella said in the message.

At a press conference alongside Murad and Chittenden County State’s Attorney Sarah George, Burlington Mayor Miro Weinberger said the murder and attempted murder “was a terrible act of violence, among the very worst the city has seen in the last decade.”

“This incident is another awful reminder that Burlington is not immune to the steep increases in gun violence that the country is experiencing,” Weinberger said. He added that the country’s “disastrous” gun laws made events such as the shooting on Monday “vastly more likely.”

The shooting is the 18th incident involving gunfire in Burlington so far this year, a record tally during the decade of available department data. A man in his forties was shot and wounded early Saturday in a separate incident downtown.

Young New American Man Killed in Burlington Was ‘Caring, Loving Person’
By Derek Brouwer
Crime
And earlier this month, a 21-year-old man was murdered near Roosevelt Park in the Old North End. Hussein Mubarak was the first person to be killed in Burlington in more than two years. No one has been charged in that shooting, which police believe was targeted.