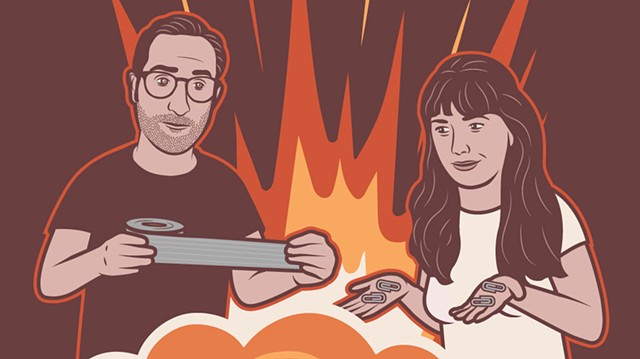 Growing up in the Northeast Kingdom in the 1980s and '90s, Nathan Hartswick didn't have many TV channels to choose from, nor the parental permission to watch "Beavis and Butt-Head" or "The Simpsons." Enter "MacGyver," a major-network show about a casually cool hero — played by a mulleted Richard Dean Anderson — who used science to defeat the bad guys, as opposed to bullets or martial arts. Young Hartswick was hooked.

Thirty years later, he has made a career in comedy, most notably as the co-owner of the Vermont Comedy Club in Burlington. Also a podcaster, Hartswick was struck by an idea amid the sudden solitude of the quarantine: Rewatch his old favorite show — not the 2016 reboot, thank you very much — and dissect it with his comedy friends through a modern lens for the world to hear.

The result is "Duct Tape & Paperclips," a new podcast he cohosts with Vermont expat comedian Annie Russell, currently a news editor at KQED in San Francisco. Together, the two "rewatch, review and ridicule" the hourlong TV classic, episode by episode, with help from local guest comics such as Hillary Boone, Brian Park, and Hartswick's wife and VCC co-owner, Natalie Miller.

Seven Days recently spoke with Hartswick and Russell by phone.

SEVEN DAYS: There are a lot of shows to podcast about. Why "MacGyver"?

NATHAN HARTSWICK: I loved it when I was a kid. But I also remember rewatching some episodes seven or eight years ago and realizing that it did not hold up well at all. So, eventually, I started thinking how cool it would be to really go through the show, episode by episode, and see what holds up and what was just the nostalgia of an overexcited 10-year-old.

ANNIE RUSSELL: I was certainly aware of the show growing up, but I wouldn't say I was exactly a fan of it. I hadn't seen it since the '90s, so I didn't remember much. What I was interested in with the rewatch is what we could talk about comedically. Because there is a lot of unintentional comedy in "MacGyver."

SD: Nathan, what about Annie made her the right cohost for the pod?

NH: Well, my first thought was, Who is someone that's really funny but also as obsessed with TV as I am? Annie came right to mind, because she has this special kind of appreciation for television. Also, I know that when she commits to something, she'll actually do it, which, as Annie will tell you, is not always the case with comedians.

AR: [Laughing] That is correct! That is very correct.

SD: So comedians watching "MacGyver," essentially. How does that work?

NH: We want to talk about the episode, but we want it to be entertaining. I've listened to enough of those recap podcasts with four white dudes in a room talking about what happened in each episode. That's why we bring in a guest every week and play games or talk about stuff outside or around the episode, which is more fun than just reciting what happened.

AR: We have a lot of respect for the listener, so we acknowledge that not everyone listening to our podcast is a superfan of the show. Someone might just want to hear what Nathan and I are chatting about, or maybe they're a fan of our guest that week. So we really try to mix it up.

NH: I've listened to a couple other "MacGyver" podcasts, and so often the people doing them talk about these characters as if they're real people. Whereas Annie and I come at it more from the standpoint of creative people who have worked in similar mediums, so sometimes we just want to talk about, like, "OK. This actor was fucking terrible, right?"

SD: The primary mission statement seems to be "Does the show hold up?" Does it?

AR: I don't think I'm spoiling anything when I say that this isn't a particularly well-written show. Especially through a lens of 2020 television, the level of production and writing and pacing we expect is totally different than it was in 1988. The writing is really just so all over the map.

NH: In Episode 1, he lives in this amazing observatory. But by the next episode, that's just gone. Not a thing.

AR: This show makes me feel like I could make a TV show with not a lot of effort.

SD: There did seem to be a wholesome quality to Mac, though, especially compared to other '80s action heroes, that made him and the show stand out.

NH: Absolutely. He was anti guns, didn't like to do anything that hurt people, didn't like smoking and was all about science. I'm not a handy person at all, but I'm creative and I have to appreciate that he was always creative in his solutions to things.

"This show makes me feel like I could make a TV show with not a lot of effort." Annie Russell tweet this

AR: Also — and I don't know if they were necessarily trying to be progressive with the show — but I think they were trying to show a leading man with empathy. He helps people; he won't kill; he's nice to kids. He doesn't quite have the tools we do now to ask the right questions about the cultures he's interacting with, though.

NH: I remember it as a sort of socially conscious show. But, yeah, the white-guy-savior-complex and American-exceptionalism thing is alive and well. But I think there's room to both critique and enjoy it. You can enjoy the nostalgia it creates while still laughing at yourself and all the "USA No. 1" stuff you used to believe when you were a kid.

SD: You've had some great guests so far. But are there any you fantasize about booking? Maybe MacGyver himself?

NH: I'd be afraid to have Richard Dean Anderson!

AR: Yeah, I don't know, man. Everything we've heard is that he's a very good guy.

NH: Which is the problem!

AR: I don't know if there's someone like MacGyver in the inventor or spy community who has sort of had his job, but I'd love to track down that person and find out how they think MacGyver portrays what they do.

NH: If there's a spy out there who hates guns and invents shit, we want to hear from you.

AR: I so want to hear him grumble about how unrealistic "MacGyver" is.

NH: There's an episode where ants make a pretty big plot point, so we got this entomologist who has a VPR radio show in to lecture us about insects for 10 minutes. It was so awesome. Also, the guy who played Murdoc (Mac's archnemesis) is still kicking around, and he's a real character. I feel like if I send him an email, you never know...

AR: Oh, I know! Henry Winkler! He produced the whole thing. I'd love to do a completely off-the-rails interview where he just apologizes for making the show. Henry! We're available; we're ready.

SD: Last question: Have either of you ever "MacGyvered" your way out of a difficult situation?

AR: Hmm. We do this to our guests, too. I'm sure I have, but I can't remember right now. I just moved to Berkeley from Chicago, so I'm sure there was something in that process...

NH: Um. Well. I cut a pair of boxer briefs up and made them into a mask? That counts, right? That counts.