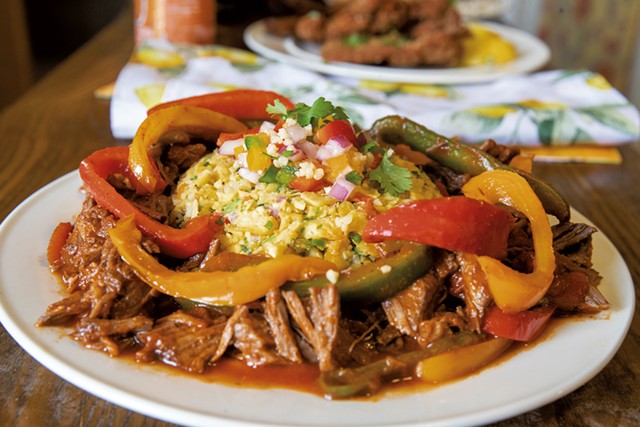 On a Monday afternoon in a back room of Zachary's Pizza in South Burlington, Oscar Arencibia was making his grandmother's recipe for flan. Plush animals (arcade prizes stacked on nearby shelves) and a reporter bore witness.

Using a stand mixer, Arencibia combined eggs with three kinds of milk — evaporated, whole and sweetened condensed — along with vanilla extract and a pinch of salt. "This recipe goes back four generations," he said.

The caramel-drenched baked custard was a trial batch for the Sunday takeout dinners Arencibia started in April under the name Santiago's. He rents kitchen space from Zachary's to test the local appetite for a small restaurant he hopes to open.

"All I want is to make good food and to share our culture here." Oscar Arencibia tweet this

Arencibia, 45, grew up in West New York, N.J., across the Hudson River from Manhattan. His parents and grandparents arrived there in 1970, part of what Arencibia called "the second great Cuban migration" following the Cuban Revolution.

His hometown and neighboring Union City became the second-largest Cuban community in the U.S., after Miami. "I grew up speaking Cuban," Arencibia said, acknowledging with a laugh that the language is, of course, Spanish — with a twist.

Two days later, in her inspected home kitchen in Colchester, Holly Anagnos was also making flan — for her new takeout business, Miami Mami. Most weekends since mid-March, Anagnos has offered a menu of Cuban dishes with some Dominican, Puerto Rican and south Florida touches that she calls "Floribbean" cuisine. 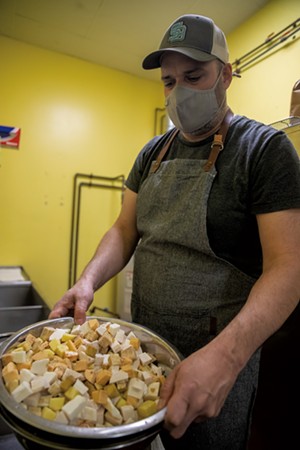 Before Anagnos, 42, moved to Vermont in 2012, she had lived in Miami most of her life. Her heritage is Greek and Italian, but she grew up steeped in the city's Cuban culture, eating in the homes of Cuban friends and at landmark restaurants such as La Carreta.

"When was a kid, I always either got a skirt steak, like a churrasco with chimichurri, or I would get lechón with boiled yuca. And I would always get a materva," she said. These flavors — skewered beef with a cilantro and garlic sauce, roast pork and cassava crowned with green sauce, and a Miami-born yerba mate soda, respectively — "are things that bring me back to my childhood," Anagnos said.

The two entrepreneurs bring distinct backgrounds to their new food ventures, but they also have some things in common. Arencibia and Anagnos were each laid off in 2020 from non-food jobs due to the pandemic. They love to cook but admitted, during separate interviews, that they find the numbers side of business challenging. The two cooks also share frustration at not being able to reliably find essential ingredients for Cuban fare, including sour orange juice, ripe plantains and certain kinds of peppers.

After relocating to Vermont, Arencibia and Anagnos missed the food they had eaten growing up. So, in early 2021, both jumped on the opportunity to make those dishes more available via low-overhead, online-ordering takeout models.

In Colchester, Anagnos prepared the base for her flan at a small table in what she calls "the little kitchen that could." The key to a smooth flan is gentle whisking, she explained: "You don't want to get a lot of air in it." She also likes to add a touch of orange extract and passes the custard through a sieve at least once. 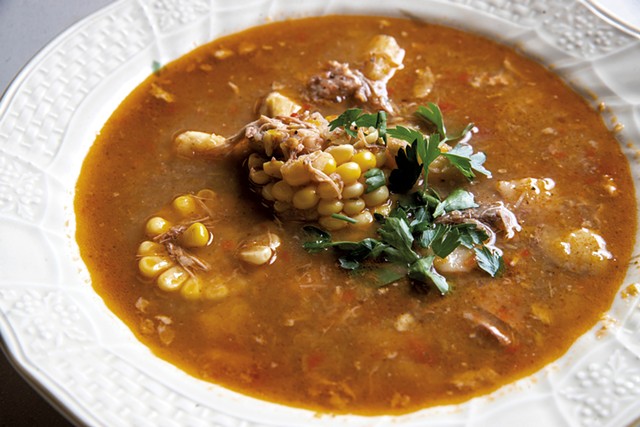 In South Burlington, Arencibia peered into his mixing bowl to check for streaks of yellow yolk. "The secret is to mix it up until everything is well incorporated, then let it rest," he said. "While it's resting, we make the caramel."

If Anagnos and Arencibia have different ways of perfecting their flan, the equally delicious results mean that Vermonters now have more ways to enjoy the rich, silken dessert. The same could be said for caramelized ripe plantains and ropa vieja made with tender stewed steak, peppers and onions.

Almost every dish on Santiago's menu so far has been based on the recipes of Arencibia's maternal grandmother, with a few nods to his wife's Puerto Rican heritage. "I'm trying to bring in the totally traditional, old-school way of cooking," he said.

For Mother's Day, Arencibia made ajiaco, a meat stew with root vegetables, corn, pumpkin and peppers that he said dates back 500 years to the Taíno, the Indigenous people of the Caribbean. He also honored his grandmother by making her favorite rice pudding infused with cinnamon and lemon zest.

His abuela's name was Asunción, "but everyone called her Nancy," Arencibia said. She worked long shifts in a New Jersey plastics factory, then lost her job when the plant moved to Mexico; she later died of pulmonary fibrosis due to work-related environmental exposure.

"My grandparents came here for the right to earn a living that provided a decent life for their family," Arencibia said. "I feel like I'm doing this for them."

At 19, Arencibia started as a restaurant fry cook, then worked his way up to the grill and sauté stations. In 2011, he shifted his career to renewable energy, driven by the desire to address the climate crisis for coming generations, including his now-16-year-old son. Arencibia had no trouble finding a good solar job when he moved to Vermont in 2015, but he was laid off in May 2020. "It's been tough," he said. 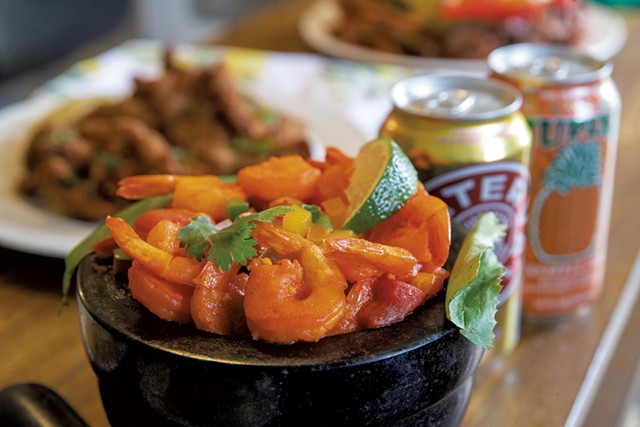 Arencibia had dreamed of starting his own food business. "All I really want is a small hole-in-the-wall," he said, "like the cafeterías I grew up with, or ventanitas."

The former are casual spots with just a counter and stools; the latter are takeout windows serving café con leche, crisp ham croquetas, and sandwiches. "You don't even know they're there, but the food is amazing," he said.

When Arencibia cooks, his family is always with him in spirit. As he stirred sugar to make caramel for the flan, he watched the saucepan carefully. "Abuela always said, 'Keep stirring. Don't let it burn,'" he said. "There's a fine line between a good caramel and a burnt caramel. It happens super quick."

For his inaugural April 9 Santiago's menu, Arencibia prepared lechón — roasted pork shoulder marinated in garlic, cumin, oregano and sour orange. Making his first huge pot of rice and beans, he channeled his great-aunt, who took charge of that staple every birthday and holiday.

"She had a caldero almost the size of this table,' Arencibia said, gesturing at a compact table for four to indicate the size of her pot.

Like many Latin American dishes, the rice starts with a sofrito of onion, peppers and garlic. Arencibia's recipe calls for tomato paste and roasted red peppers. His great-aunt Romelia would cut the onion holding it in her hand, and she never needed to measure the water, he remembered.

Unlike his tía, Arencibia cooks his beans from scratch. She had divulged to him, "'I'm not going to all that trouble when I can get beans already cooked!'" he recalled. "Oh man, my childhood was completely blown," he said.

Home cooks of that generation rarely wrote down recipes, so Arencibia depends on memory and a lot of tasting. When he would ask his grandmother how much of an ingredient to use, her reply was often "'a handful,'" he said. "And I'd say, 'Well, my hands are bigger than yours!'"

Arencibia described Santiago's as a passion project. It's covering the costs and, for now, that's OK. "All I want is to make good food and to share our culture here," he said. 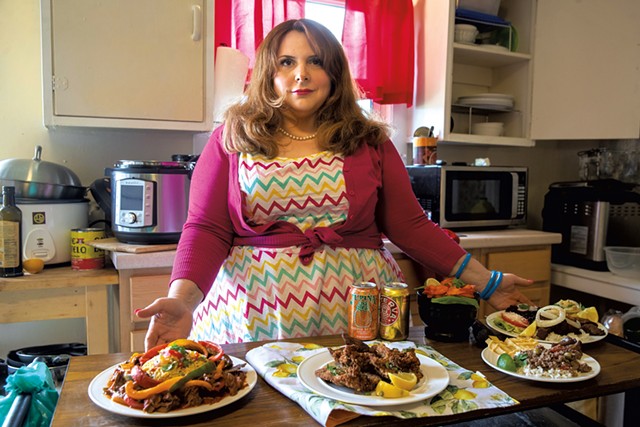 With Miami Mami, Anagnos shares foods that were essential in her childhood, but she also blends in flavors and ideas from other Caribbean cultures. "I don't do just Miami-style Cuban," she explained. "It gives me a lot of creative liberty."

Anagnos originally moved to Vermont for its natural beauty, cool climate and creative community, but she immediately missed Miami's vibrant food scenes. "I remember one day I saw yuca at the grocery store [here], and I was so excited," she said.

"I just make what's in my heart to make." Holly Anagnos tweet this

She worked for many years in marketing, business communications and technical writing but was laid off from her job in April 2020. Miami Mami allows Anagnos to share the foods she loves and earn some income. And, she added, "I just really like cooking for other people."

Her weekend menus offer several different entrées, sides and desserts. Ropa vieja and a fried chicken dish called chicharrón de pollo are among the most popular. Crunchy nuggets of marinated chicken come with a tangy, creamy sauce that includes mayonnaise, curry powder and lime juice. It is similar to a sauce served throughout south Florida, a prime example of what Anagnos called "the Miami-ness of what I'm doing." 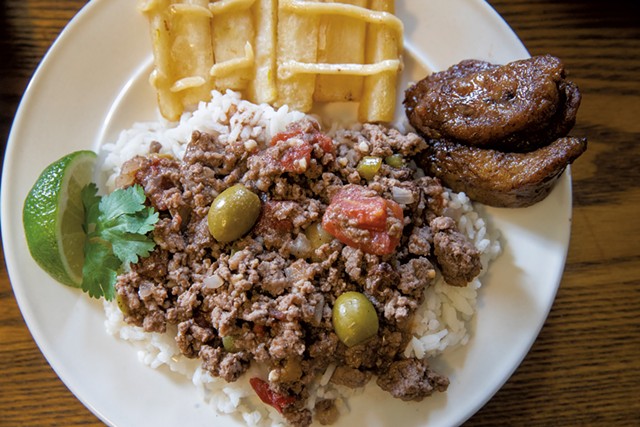 She makes the pan-Latin favorite tres leches cake, as well as American-style coconut cream and key lime pies. Anagnos recently riffed on tostones, using the flattened, fried plantain rounds as a base for nachos, a trend she'd read about.

"I make what inspires me," Anagnos said. "I just make what's in my heart to make."

Many of her customers are transplants, too, and say that her dishes remind them of home. Referring to a woman who drove up from Middlebury, Anagnos said, "Her parents are Cuban, but they hadn't had their food in many, many years."

A couple of weeks ago, unable to source Cuban bread, Anagnos resorted to baking some herself, using pork fat saved from a previous dish. "I made enough for 50 sandwiches," she said, "and I sold all 50 sandwiches."