Album Review: Two Cents in the Till, 'Greenland' 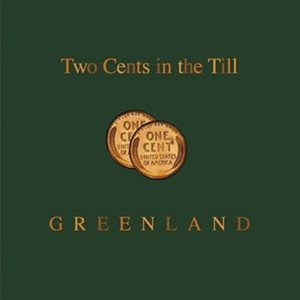 Two Cents in the Till are a folk quartet from the Montpelier area who take their homegrown aesthetic seriously. Their debut LP, Greenland, eschews familiar covers and traditional favorites to deliver a set of original songs, composed by a rotating cast of three singer-songwriters. The result is a confident and surprisingly cohesive LP.

The album leads with "July Fling," a breezy but tightly written sing-along by Kimberley McKee, who also delivers some clean banjo work. The band steps up the tempo for "S Bar X," a proper lonesome bluegrass lament by guitarist Mabel Lee Cushman. Mandolin player Natalie Babij offers the sunniest selections on the album, such as "Permanent Vacation" and "Destined to Roam."

Bassist Ed Sutton, the eldest member of the band and an experienced bluegrass sideman, is the band's anchor. His deft touch enhances every track here, and yet you'll hardly notice him once.

Having three lead vocalists inevitably invites comparisons, and McKee is clearly the standout singer here. She also wrote half of Greenland's 12 tracks, demonstrating a lot of range in the process. Two of the album's highlights are hers: the catchy foot-stomper "Regional Uplift" and the gray, wide horizons of "Union Reenactor," a lovely balled.

That said, this LP shows that all three vocalists are talented songwriters. It would be especially interesting to hear more from Cushman on future projects. She has a real gift for evoking images and delivering meaning with very few words.

Collectively, Two Cents in the Till do credible work as a vocal band. They nail a fair number of goosebump-inducing harmony moments over the album. Instrumentally, the band breathes as one, with a knack for simple parts that hang together beautifully. Solos are never flashy, always just right. It takes a lot of lonely hours in the woodshed to sound this effortless.

Colin McCaffrey recorded, mixed and mastered Greenland at the Greenroom, his studio in the hinterlands of East Montpelier. Much like the producer's previous work with Mayfly, Mark LeGrand and countless other twangy locals, McCaffrey imparts almost zero studio sheen, opting for a raw, pure performance. For a band like Two Cents in the Till, there couldn't be a better approach.

Good folk music has to walk a very fine line. Every song here was honed by live performance, sparse but carefully arranged. These musicians draw from a deep well, and it shows, track after track. While reverence for the genre anchors the album, what really stands out is how the band makes it their own.

Two Cents in the Till are legitimate heirs to the Vermont tradition of great porch music, toeing the line between Patti Casey and Michael Hurley. Most impressively, they're doing so with a set of their own songs instead of renditions of the old classics. Fans of humble, authentic folk music will find a lot to love in Greenland. It's quite a debut.

Two Cents in the Till play Saturday, April 28, at the Den at Harry's Hardware in Cabot. Greenland is available at CD Baby.

Speaking of Two Cents In The Till, Greenland

Album Review Two Cents in the Till Greenland