Carol Stenberg has lived in her New North End home in Burlington for three decades, but only in the past few years did the 65-year-old architect consider where she wanted to spend her later life. With a partner in southern Vermont and a professional practice mostly in Maine, she wanted to keep a base in Burlington.

As it turned out, a perfect space was available on her own property: the attached garage and covered porch of her 1955 ranch home. Accustomed to smaller spaces — she lived on a sailboat for four years — Stenberg decided to turn the 290-square-foot area into an accessory dwelling unit, or ADU.

According to "ADUs in Burlington: A Homeowner's FAQ Guide," a March 2020 document published by the City of Burlington, an ADU is "an efficiency or one-bedroom apartment that is subordinate to the primary dwelling, and includes facilities for independent living, including sleeping, food preparation, and sanitation."

Essentially, an ADU is a small housing option inside already built structures. We talked to two Burlington residents about the ups and downs of constructing one.

When Nest visited Stenberg's Brierwood Lane ADU, a friend was lending her tools for tiling the tiny entryway. The former home of Stenberg's Prius, garden tools and "lots of junk" had been transformed into an efficiency that was almost complete.

"It was my COVID project," Stenberg said.

The pandemic wasn't her only impetus. In February 2020, Burlington's city council adopted ordinance changes that tweaked the zoning rules to make ADUs an option for more homeowners. The most significant changes are the elimination of the former parking requirement and an increase in allowable size to 800 square feet.

The new rules also increased allowable impervious lot coverage — 650 square feet of lot area are exempted if stormwater impacts are mitigated — and streamlined the permitting process so that an application no longer triggers automatic review by the Development Review Board.

Stenberg said the parking change was "my reason for doing it." The architect had already decided to renovate the garage as an addition without a full kitchen. (The kitchen would have made her property a two-family home requiring its own parking space, something the length of her driveway ruled out.) But when the parking rule changed, she dropped that application and applied for a new permit for an ADU.

Stenberg doesn't yet have her certificate of occupancy, which is issued after the structure passes all inspections, so she's used her ADU only intermittently over the past year. Her 32-year-old daughter — a pandemic refugee from Brooklyn — has been staying in the house.

The completed ADU will provide Stenberg with a range of options. "I wanted to be able to stay in my home and have a separate unit for a caregiver, or rent the house out for retirement income," she explained.

The city allows homeowners to rent either the ADU or the main house as long as they live in the other space. Long-term rentals are allowed if the rental unit is registered as such with the department of permitting and inspections. Short-term rentals such as Airbnb require a bed-and-breakfast zoning permit.

Stenberg's ADU goes far beyond most houses in energy efficiency. A certified PassivHaus designer, she built it to passive house standards, superinsulating the 20-inch-thick ceiling and 12-inch walls with mineral wool and installing European-grade vents that provide continuous ventilation. The windows are triple-paned, including an operable skylight whose ceiling cavity is splayed to admit maximum light. A sliding glass door leads to an extensively planted backyard; Stenberg is an avid gardener and cook.

The small woodstove sitting in the corner of the main room has "a New England comfort factor if we lose power," Stenberg said, adding that heated floors or an electric heat pump would have been too much for the space. She needed to use only half of her half cord of wood over the past winter.

The room also contains her bed, two armchairs and a small table where she has entertained dinner guests. The all-electric kitchen along one wall is missing the planned IKEA cabinets — unavailable due to the pandemic — but she found a used dresser that works just as well. Her Wolf countertop oven is big enough to roast a chicken, Stenberg said.

The other "room," a hallway with storage and a full bathroom, has a pretty design in river rocks on the floor beneath the showerhead. A separate bathtub has a view of the backyard through a square window. There's no entry to the main house because there was no logical place to put one, Stenberg said.

She budgeted $25,000 for her ADU, nearly half of which was for licensed electrical and plumbing work. Stenberg saved money by doing most of the other labor herself, including reinstalling the original northwest red cedar siding that she discovered under the vinyl siding. "I haven't tallied all my receipts, but I think I came in for less," she wrote in an email.

It helped that, as an architect, Stenberg was already familiar with Burlington's zoning requirements and building code. She learned all the rules for ADUs: For example, though her driveway had room for two cars parked end to end, as required for the house, she had to prove that it had enough additional length to meet the zoning requirement for space in front of the ADU.

Some of her calculations were esoteric, and Stenberg is considering offering her knowledge as a service to other homeowners pondering an ADU.

One piece of advice she would most likely offer: Plan for the tax increase. "I wish I'd thought of that," Stenberg said. She'll be taxed for what is now a two-family unit, even though an American family is unlikely to live in 290 square feet. "I think there should be a minimum size to be considered [that]," she said.

Stenberg also recommends designing one's ADU before pulling a permit. "The key to a small space is having it designed so that it works," she said.

For her unit, Amy Magyar had more room to play with. The detached garage in back of her 1883 house on Howard Street is now her 420-square-foot home.

Formerly, the garage "was where we stored our crap," said Magyar, 49, a career coach with her own business, FromWithin Coaching. But when she separated from her partner, she was faced with full mortgage payments. An ADU would allow her to rent out the house while living and working in a space she already owned.

When Magyar applied for an ADU permit in 2018, she didn't have the requisite parking space, so she applied for a studio permit instead. In September 2019, when the planning commission and city council ordinance committee began meeting jointly on ADUs, Magyar started attending every meeting. "I was one of the loudest voices" for change, she said. The day after the new ADU ordinances were adopted, she resubmitted her permit.

Like Stenberg, Magyar did much of the work on the ADU herself. Before moving to Burlington in 2006 for a job at Burton, she'd gained building experience renovating a Victorian house in Indiana.

Her current gable-roofed structure retains its original driveway-facing, single-paned windows. A sliding glass door inserted on the side is now the entry, and Magyar added four windows that developer James Unsworth gave her from his demolished duplex a block away.

She insulated the ceiling in spray foam and used rock wool for the walls. The old cement floor was due to be torn up, so Magyar had a heated floor installed, powered by propane. Nikkita, her 20-year-old cat, "thinks I built [the heated floor] for him," Magyar joked. 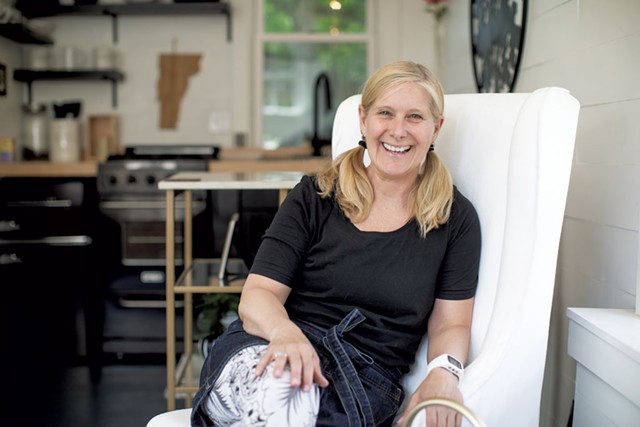 Early on, she ran into a problem that many homeowners may experience: Her garage was more than 50 feet from the street and detached from the house. That meant the Burlington fire marshal required her to install a sprinkler system. Because the city had only approved commercial-grade sprinkler systems at that time, installers knew of no alternatives.

Magyar spent $10,000 on the system, including a 300-gallon water tank stored in the basement of the main house and an underground pipe to the garage. Her advice to future ADU builders: Use the Uponor residential system, which can be connected to the residential water line with a plastic pipe and needs no tank. It would have cost her half as much.

In part because of the sprinkler cost, Magyar's final expenses ran to $50,000 — well beyond her budget of $30,000. But the project has allowed her to rent her house long-term to a COVID-19 refugee from Maryland.

Magyar's black-and-white-themed space has a loft for her bed, accessed via a built-in set of metal-pipe steps. The loft is too short to stand up in but needed railings, according to code; she constructed built-in shelves in the gabled space.

Such space savers are everywhere: a sliding barn door covering the closet doubles as the bathroom door; a day bed that opens to a full bed allows her to have overnight guests. She chose two small wall-mounted fans instead of a ceiling fan, which would have taken up too much room.

"ADUs are so amazing because they teach you what you need to live with and what you can do without," Magyar said.

She and Stenberg both have stories about conflicts with various inspectors over building and electrical codes. Vermont's Department of Housing and Community Development included a frank statement in its June 2020 ADU "How-to Checklist": "The to-do list ... identifies items you may need for creating an ADU. The permits and steps all have important functions but, taken as a whole, can make the process difficult, expensive or even impossible."

That difficulty may explain why the Burlington Department of Public Works has not been flooded with ADU permit requests since the city changed its regulations. Scott Gustin, principal planner and assistant administrative officer in the department of permitting and inspections, wrote in an email, "Zoning permits issued for accessory dwelling units since 2004 have ranged from one per year to eight. Since the regs changed about a year ago, we saw six permitted in 2020. Two have been permitted thus far in 2021, with two more in the queue."

Magyar hopes that future ADU creators won't have to go through what she did. "A lot of us have battle scars, but I think the city's in a place that they see how to make it more user-friendly," she said. "And they are [doing that], for sure."

Find the Burlington ADU FAQ at burlingtonvt.gov/cedo and the state's how-to checklist at accd.vermont.gov.

The original print version of this article was headlined "Accessorizing Your Home | Two Burlington residents share the good, the bad and the onerous about ADUs"