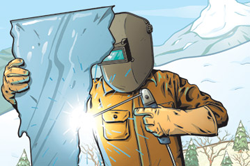 The first thing you notice at Twincraft Soap in Winooski is the smell — a potent, perfume-y mix of what seems like thousands of different fragrances. That’s not too far off the mark. Twincraft manufactures 26,000 separate soap formulas for some of the biggest names in the business: Crabtree & Evelyn, Aveda, Mary Kay and Burt’s Bees, to name just a few.

For years, Twincraft manufactured its own soap brand — in addition to hotel amenities such as shower caps and shoehorns — but it gave that up more than a decade ago to focus exclusively on producing private-label bar soaps for different cosmetic companies. Today, Twincraft services 150 different customers, including Victoria’s Secret, Estée Lauder, Clinique, and dozens of others that Twincraft is contractually barred from revealing. The soaps range from boutique brands that retail for $20 apiece to super-cheap “national brand equivalents” — generic versions of Irish Spring and Dial made for retailers such as CVS.

Specializing in just bar soap — and the ability to “innovate” by experimenting with different recipes, fragrances and molds — is what has kept Twincraft competitive, says CEO Peter Asch.

“Everybody is looking for new products — something different, something unique. So we’re always trying to provide that on a brand-specific basis,” says Asch, whose father and uncle founded the company in Montréal in 1971.

For Burt’s Bees, that meant developing a soap bar made from canola oil, or rapeseed, rather than the more common palm oil. For other brands, it has necessitated molding soap bars with little “massage nubs” that massage your skin while washing it.

The tinkering appears to have paid off. Since 1995, the company has grown to 225 employees, and sales have skyrocketed from $4.5 million to $35 million. Twincraft had to open a second facility in Essex to warehouse the volume of product coming out of the Winooski plant on Tigan Street in Highland Industrial Park.

Why the bar-soap boom? Asch credits the recession. With less money to spend, customers are ditching their fancy liquid soaps and body washes and returning to the humble bar soap — which is viewed as being more economical, he says. Twincraft has been able to capitalize on the trend by producing many different soap brands in relatively small batches.

On the factory floor, eight production lines each crank out a different soap brand. After they’re mixed, cut and pressed, the bars go to a storage room where they are cured, wrapped and boxed, before shipping all over the country. The faces working the lines look as diverse as the soaps themselves; many are refugees who immigrated to the Burlington area from Eastern Europe, Africa or Asia.

“What you see in our company is like the United Nations,” Asch says proudly. “It’s a great entrance to the country, and steady work.”

Unlike a lot of local business executives, Asch thinks Vermont is friendly to business. Here, Asch says he can pick up the phone and call the governor if needed, a level of access he suspects he wouldn’t have in bigger states such as New York or California. While admitting he could “probably make more money living in another state,” Asch says Twincraft will remain in Vermont for the long haul.

“It’s not about making money, at the end of the day,” he says. “It’s about having a successful business and a balanced, healthy life.”