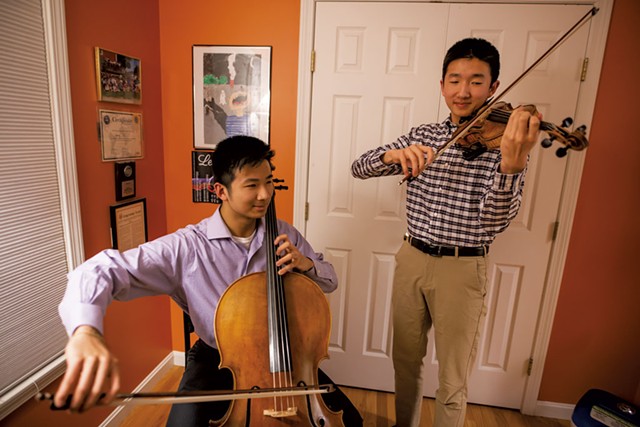 When Nathan and Henry Wu say they can meet for an hour at Barnes & Noble in South Burlington, it's something of a miracle. The twin brothers, who are seniors at Essex High School, will be featured as soloists in the Vermont Youth Orchestra Association's last concerts of the season. But that's far from all they have going on.

Nathan is a violinist who studies with Kathleen Kono. He also skis on his school's nordic team, runs track, holds a student government office and competes in Science Olympiad, Vermont-NEA Scholars Bowl and math league. He would love to play in the school's orchestra, but all his advanced placement classes preclude rehearsals, so he plays percussion in the jazz band instead. He also plays piano.

Henry, who will play cello at the April concert, fits the meeting in between his piano lesson with Paul Orgel and his cello lesson with Emily Taubl. He also plays in the pit orchestra for his school's musical theater productions and is currently directing the middle school musical, Roald Dahl's Willy Wonka.

Both boys love to bring music to others. So, in 2018, they created an hourlong duo program to present at local libraries. To date, they've given 17 free public performances as part of an initiative they call Classical Music Encounters.

"Our first one was in the Fletcher Free Library," Nathan recalls. "I started with the Bach adagio from the first solo sonata — wait, did you start with that one?" he asks his brother.

The two take turns chatting to audiences about their favorite composers. They try to include pieces dating from the 1700s through the present day, ranging from familiar works to ones such as the Russian composer Reinhold Glière's Eight Pieces from 1909 and a 1971 piece by Chinese composer Tan Dun.

At school, Henry says, "We noticed that a lot of kids were missing out on the beauty and power of classical music. We wanted to have a library series for both the young and old."

And they wanted to appeal to people with all levels of familiarity with the repertoire, Nathan adds. "We want to show people the lesser-known pieces that are just as beautiful."

As a sophomore, Henry was already looking for ways to spread the word about classical music. Online, he came across the "Back to BACH" Project, an international nonprofit that encourages K-8 students to play instruments. Henry founded the Burlington-region chapter of the group and was recently named director of global operations for the tri-region area (Burlington, Albany, N.Y., and Hanover, N.H.).

The fraternal twins have similar smiles but different personalities: Henry is serious and sincere, Nathan outgoing and humorous. Only some teachers get them mixed up, they say.

While both brothers are waiting to hear from a number of colleges, neither plans to major in music. Nathan wants to study biochemistry or biophysics. Henry is thinking of pursuing applied math and public policy together. "I hope to use data to design effective policy solutions for social issues," he explains.

Seven Days asked the boys' private teachers about how common it is for their best students to decide against pursuing music.

Kono, who teaches with the VYO and at the Integrated Arts Academy in Burlington, has been giving Nathan violin lessons since 2012. She recalls that it took only two months for the piano-trained rising fifth grader to reach the third-from-top level of orchestra. Before his first meeting with her, Nathan had already taught himself the first three Suzuki books.

"He's so ambitious that I can give him a piece with the fingerings, the bowings, the tempo, and he will come back with everything learned," Kono says. "His attention to detail is pretty amazing."

"I love how he gives back to his community." Kathleen Kono tweet this

Kono is not surprised that her star student is not going into music. "Kids who don't do [sports] and don't take a thousand AP courses, who just really love their instruments — those are the ones who are going to study music," she says. "But [Nathan's] passion lies with science. He's a hard worker. That is the No. 1: He's disciplined, determined, though he's a lot more relaxed now — [and] takes a lot of things in stride.

"I'm finding that other kids tend to be all about what chair they get, who they beat, "Kono adds. "Nathan celebrates other people's successes. That kind of human nature is just really amazing. I love how he gives back to his community," she continues. "[He and his brother] do it because they love it."

Taubl, who has taught Henry cello for the past year, is principal cellist for the Springfield Symphony Orchestra in Massachusetts. "He's won so many competitions. He's just so impressive," she says.

Besides being unerringly prepared and a careful note taker, Henry is already technically proficient, Taubl says. Often, she adds, he "asks such great questions that I find myself having to practice what he's working on in order to give him the best advice."

No matter what Henry studies, she says, "Some college will be very lucky to get him. He definitely could go to music school, but I'm sure the cello teacher and orchestra wherever he goes will be thrilled to have him."

Nathan and Henry's parents are from China; the twins were born in Colchester, where their father worked at IBM. Their mother, Dongdong Lin, a food scientist, played violin briefly as a child, but she and her husband are not trained musicians. Lin has been an ever-present supporter of her sons' music making, attending lessons and helping them schedule concerts.

Nathan is grateful for that support. "When I started playing piano," he recalls, "I thought, Oh, this is cool! But once you get to practicing, it's hard to persevere. Our parents are always there to keep us going."

Henry adds proudly, "Our dad is supportive. He wants to learn more. He actually has a really good ear. On the radio he recognized something we had played recently!"

Each Wu brother won an audition competition to secure his upcoming senior solo with the VYO. Nathan will play the first movement of Samuel Barber's violin concerto. "I'm super excited. It's such a beautiful melody," he says. "There are a lot of trade-offs between the violin and orchestra" — instead of the orchestra accompanying the soloist, as in many other concertos.

"One of the funny stories about it is the discrepancy between Barber and the person he wrote it for," Nathan continues. "The first two movements aren't really difficult, so the soloist made fun of it and said he wanted a more challenging, showier third movement. So the third movement is kind of crazy perpetual motion — it never stops."

Henry's solo is the first movement of Joseph Haydn's second cello concerto. The cellist "prefer[s] to play Romantic-era pieces, but this is so bubbly and light and happy," he says. Unlike in the Barber, he adds, "the orchestra is way under the soloist in terms of importance." Nathan comments with a laugh that he is less than excited about accompanying Henry with a lot of "Duh-duh-duh-duh."

Not that there is a whiff of competition between the brothers. Henry, Nathan says, is "a really caring person, a really good musician, and I'm jealous because he has perfect pitch."

Nathan, according to Henry, is "very focused, something I have a hard time with. He never leaves things unfinished. He's a very investigative learner, not afraid to dig deep into whatever problem is in front of him."

Nathan can't help adding, "When Henry sees something that's morally objectionable, he doesn't shy away from it. He won't just let things slide."

Turning to his brother, Nathan advises, "Don't be a politician. Unless you can be a good politician."