Twenty Years Ago, Champlain College Basketball Went Away, and So Did a Piece of Burlington | History | Seven Days | Vermont's Independent Voice

Twenty Years Ago, Champlain College Basketball Went Away, and So Did a Piece of Burlington 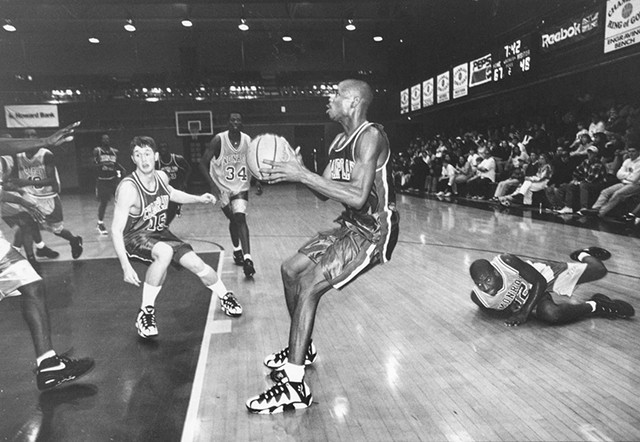 On a weeknight in February 2002, the Champlain College Beavers basketball team ran past Sage College of Albany for a 76-67 victory before the brimming bleachers and balcony of Burlington's Memorial Auditorium. It was the last game the team played in the now-abandoned building. When the 2002 season ended, so did Champlain's varsity athletics program.

Devoted fans still mourn that long-ago evening, when former players, alums and hundreds of enthusiastic locals filled the auditorium to take one last look at the National Junior Collegiate Athletic Association power that coach Bob Tipson had built in Burlington.

Regardless of the circumstances, this game would have drawn a crowd. Champlain basketball games were a genuine event in the Queen City. Night after night, Champlain played an exciting brand of basketball, relying on pressure defense to force turnovers, which often led to fast-break buckets and slam dunks. Often, the outcome of a Beaver basketball game was no longer in doubt by halftime. Fans stayed to see the show anyway. An evening of Champlain basketball at Memorial Auditorium had the best entertainment value in the region, and the team almost never lost at home.

"Not once did my players make a scene or get angry," Tipson, who coached Champlain from 1968 until 2004, said of that final season. "The only time we ever talked about it ending was the game against Albany, the last game for the Champlain program."

"The program was a family affair." Scott Tipson tweet this

Tipson had starred at Champlain in the mid-1960s, captaining one of the Beavers' first great teams. After finishing his education and playing career at Plymouth State University in New Hampshire, Tipson returned to Champlain as head basketball coach in 1968. Over the next 36 years, his teams won more than 700 games, making him one of the winningest coaches in junior college history. On five occasions, Champlain reached the junior college national championships in Hutchinson, Kan. Along the way, the Beavers and their fervent supporters made dreary old Memorial Auditorium come alive for a dozen home games each year, deep in the doldrums of winter.

On-court ambassadors for the college, the Beavers were also exemplary representatives of the institution in the classroom. More than 90 percent of Tipson's players graduated with their associate's degrees, a greater percentage than the student body at large.

Dozens of Champlain basketball players went on to complete four-year degrees while playing Division I, II or III college ball. Beaver basketball alums played in some of the country's top collegiate conferences, including the Big East, the Atlantic Coast Conference (ACC), the Atlantic 10 and the PAC-10 (now the PAC-12). Every player on that final Champlain team either finished his education in Burlington or completed an associate's degree elsewhere. 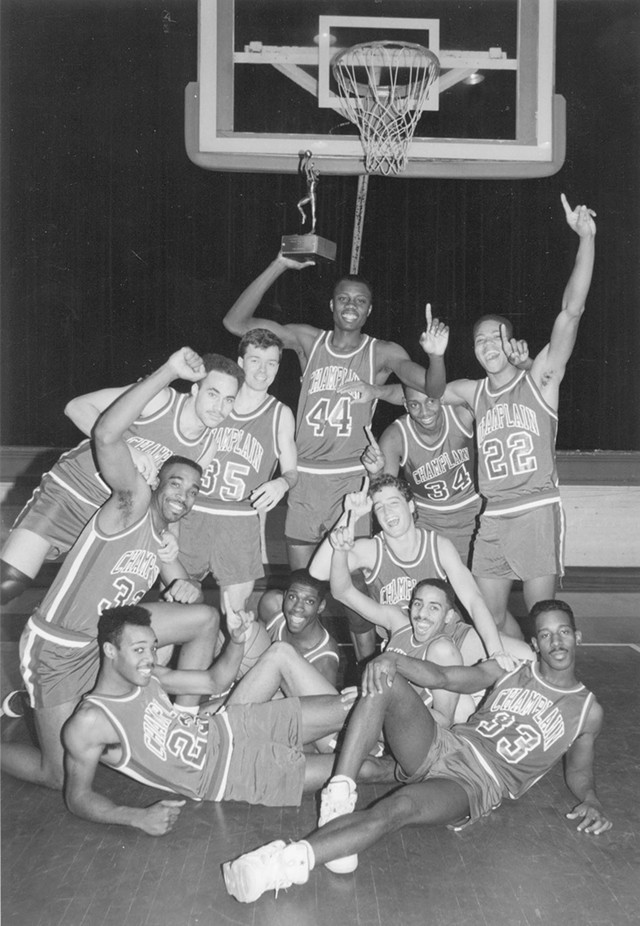 For many young athletes in Chittenden County, the Beavers were also great role models. Justin Bristol, who played freshman basketball for Burlington High School in the winter of 1995-96, remembers the daily encouragement that he and his teammates received from Champlain players, who practiced just before the BHS Seahorses at Memorial Auditorium.

"We used to take the bus [to Memorial] early just to watch," Bristol said.

The BHS students marveled at the speed, skill and athleticism of the likes of Ashanti Hall, Kojo Mensah-Bonsu and Terrell Baker, members of Champlain's class of 1997, a group that advanced to the national championship as first-year players in 1995-96. The Beavers posted a 31-2 mark the following season before losing in the Sweet 16. 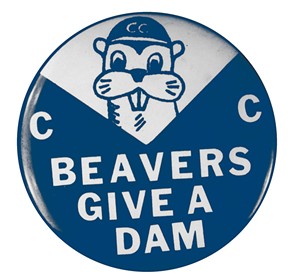 "Here we are, 15-year-old little freshmen on the sideline. They are out there dunking, running up and down the court," Bristol recalled. "They come off and slap us five. It was amazing."

After watching Tipson put the Beavers through loud, intense and fast-paced practices, Bristol said he and his teammates felt a surge of energy going into their own workouts. The Champlain players always spoke with Bristol and his teammates afterward on the sidelines, talking basketball and sneakers and encouraging the high schoolers to come to the games.

Unsurprisingly, several BHS players became regulars at the Champlain games. Bristol remembers spotting players from other high school teams also coming out to see big-time basketball in Burlington. But the opportunity proved a fleeting one.

In 2000, Champlain president Roger Perry won the support of the college's board of trustees to do away with its athletic programs and channel the money toward other forms of campus recreation that would appeal to the broader student body. The move ended not only basketball but also Champlain's men's and women's soccer teams, which were consistently among the best junior college programs in the country.

Champlain leaders sold the decision as part of the school's transition from a two-year institution to a four-year college. Perry cited budget limitations and a survey indicating that potential students were more interested in outdoor leisure and fitness than in four-year varsity athletic programs. 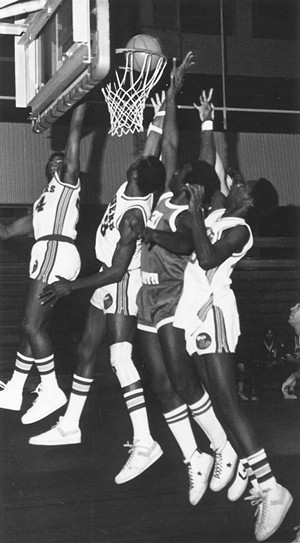 The board of trustees concluded that Champlain could either keep its varsity teams or provide its student body with opportunities to go rock climbing or skiing, or play intramural volleyball. Twenty years later, Champlain continues to present the heyday of Beavers athletics as part of its junior college past.

"Following its transition from a junior college to a four-year institution starting in the early 1990s, Champlain College disbanded varsity athletics in 2002 in favor of robust intramural, fitness, and club sports offerings," a Champlain representative wrote in response to a question about the future of intercollegiate athletics at the school. Champlain also touts its new esports program, where students play video games competitively (see "Game On," October 19, 2022).

But for fans of athletics, particularly those in the neighborhoods surrounding downtown, Champlain basketball gave a sense of rhythm to the long winters. Whether it was following the team in the Burlington Free Press or building a weeknight or weekend around seeing the team at Memorial Auditorium, the games offered an affordable night out during the darkest months of the year.

"It was never more than three bucks to get in," Bob Tipson recalled. "If they didn't have the money at the door, we'd let them in, knowing that they were going to see a great show and come back next time with a couple bucks." At the door, his sister-in-law, Sally Tipson, ripped tickets.

"The program was a family affair," said Scott Tipson, who played for his uncle Bob at Champlain in the early 1990s "When I played, my mom was working the door, taking money. My dad and my uncle were doing the score book and the clock. Uncle Bob was coaching. My brother was doing statistics. Bob's sons were the ball boys." 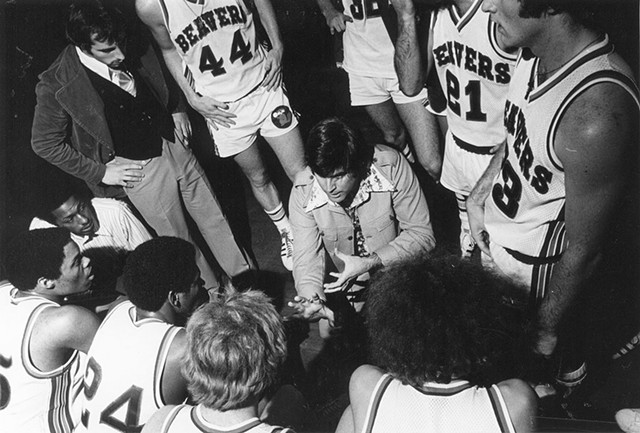 "He did more than anyone for diversity in athletics and education in the history of the state," former UVM basketball coach Tom Brennan said of Bob Tipson, his friend and colleague.

For much of his run at Champlain, Tipson recruited heavily from the New York City area. During the height of Beavers basketball, a clear majority of the players on the team were Black at a time when Burlington itself had few Black residents. According to Tipson, opponents recruited against Champlain by citing the predominately white makeup of Vermont.

The Black Champlain basketball alums interviewed for this piece spoke glowingly of their experiences at the school and in the city of Burlington.

"Vermont is one of the greatest places in the world," Baker, the former Champlain guard, said. Baker helped lead Champlain to the 1997 national championships before becoming an All-ACC performer at Florida State University. "The city [of Burlington] and the people never treated us differently. It was the greatest experience I ever had. We never felt different."

"At first it was a shock because of the weather," Willie Ladson, the star of the first Champlain team to reach the national championships, in 1989. "It took me a while getting used to being right off the lake," said Ladson, who had attended high school in New Rochelle, N.Y. He found friends and community at Champlain, even spending the summer between his first and sophomore years in Burlington completing additional classes. Ladson still remembers the kindness of the family friends of coach Tipson who provided him a home for the summer.

Those associated with the Champlain basketball program still express dismay about its rapid demise. 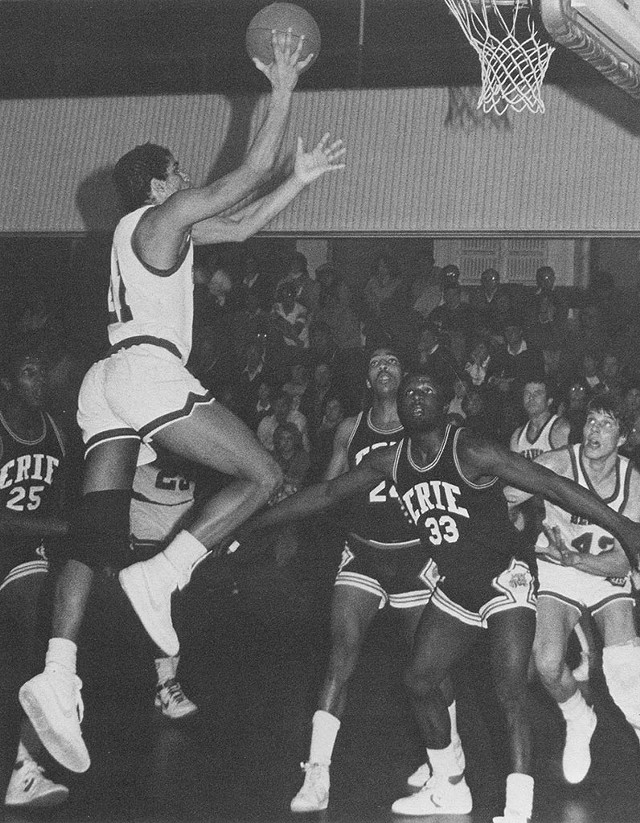 "I'm still in shock. The program had a solid foundation, and I thought it would continue for years to come," said Ladson, who finished his college career at Duquesne University in Pittsburgh. He later played professionally in Europe and Latin America before becoming a coach himself.

"He was an educator," Ladson said of Tipson. "He was like a father figure because I didn't have one at home. He gave me a lot of confidence. My freshman year I was kind of raw, and he molded me as a player."

The fraternity of Champlain basketball players remains a remarkably strong one. Many former players, coaches and others associated with the program speak regularly or remain in contact through social media.

"You would not understand the genuine love we had for each other in that community," Baker said of the lifelong bonds he forged at Champlain. "That community loved us, and we loved them."

After a sabbatical, Tipson took a position as an assistant basketball coach at Quinnipiac University in Hamden, Conn., before completing his career as a compliance officer for the university's athletic department. He lives in Connecticut but said he still considers Vermont home. And for as long as there are people who remember all that this basketball program meant to the community, the Champlain Beavers will have a home in Burlington.