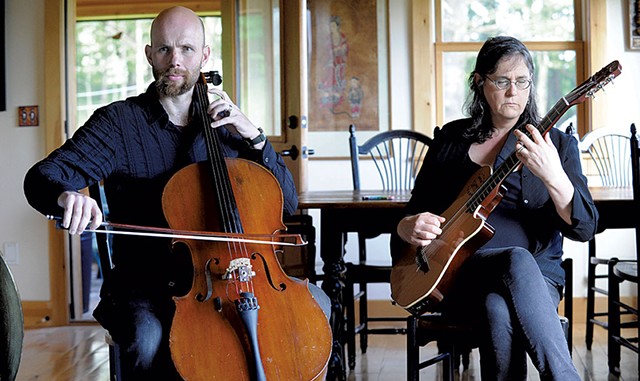 As a total solar eclipse darkened the skies on August 21, 2017, composer Danielle O'Hallisey found herself in front of her computer.

"The light got weird, my mood got weird, I started googling [outer space] and I came across the lost cosmonaut recording," O'Hallisey recalled recently by phone. She was referring to the unverified 1963 recording by amateur radio enthusiasts of a Russian female astronaut uttering her last words while hurtling toward Earth on a craft that had caught fire.

"It's bone-chilling and one of the most powerful things I've ever heard,"O'Hallisey said. At the time, the composer was in Vermont, where she lived for nearly 40 years; she has since moved to Seal Beach, Calif., for health reasons.

O'Hallisey began composing a piece that day; it took her five years to complete. An exploration of female pioneers in flight, "Women of Aeronautics" will receive its world premiere from TURNmusic at the ensemble's October 2 concert at the BCA Center in Burlington.

Led by Anne Decker, TURNmusic features a shifting roster of chamber musicians who perform new and experimental works, often by Vermont composers. Nine musicians will perform the program on Sunday evening, which also includes Paola Prestini's "G-Force" and the U.S. premiere of Jessica Meyer's "the dappled light just beyond her skin..."

"Women of Aeronautics," the program's final piece, uses visual projections to help tell the women's stories. To create that multimedia element, the composer worked with filmmaker John Cannizzaro, who specializes in archival footage. Originally from Burlington, he moved to California in 1990 and lives in Santa Monica, where his company Smokehouse Films is based. He and O'Hallisey will both fly to Vermont for the premiere.

"A lot of [the early pilots] died because they were skilled but no one would hire them for commercial aviation because they were women," O'Hallisey said. "So they had to pull stunts, like be wing walkers or do barrel rolls" before the era of seat belts. That was the case for Bessie Coleman (1892-1926), the first Black and Native American woman to hold a pilot's license, who fell from an open cockpit.

O'Hallisey shaped her music around her research on each aviator and the clips she and Cannizzaro found depicting them.

The piece's prelude, which O'Hallisey described as "Jazz Age-y," is accompanied by video footage of wing walkers and a woman fixing a flat tire on an airborne plane.

Three movements deal with Amelia Earhart's solo flights. The last, about the flight on which Earhart disappeared forever, has a snappy, militaristic theme. O'Hallisey said she meant it to express the controversy over the government's decision to pay for search parties.

"Some of the generals were so pissed that they didn't try very hard. [It's possible] she could have been rescued but wasn't," O'Hallisey declared.

"Usually, the music is done to enhance the visuals," Cannizzaro said, describing his collaborative process with O'Hallisey. In this case, however, "We were editing picture back to music."

For instance, after listening to the Russian cosmonaut's haunting last words and O'Hallisey's music for the movement "Hymn for a Lost Cosmonaut," the two paired it with a series of images of "atmospheric space, clouds [and] smoke."

"We'd sit there with the music and this idea," the filmmaker recalled, "and she'd say, 'What if we had aerial shots of lights at night?' I'd go back and find some footage of that."

O'Hallisey studied film scoring at Berklee College of Music in Boston, though she didn't complete a degree. Her claim to fame, she joked, is that the ABC dating reality show "The Bachelorette" featured one of her compositions.

A guitarist, O'Hallisey started composing "Women of Aeronautics" for Yellow Sky, a Vermont trio-turned-quartet that she formed with violinist Letitia Quante, cellist Michael Close and violist Elizabeth Reid. After the group folded in 2018, two strokes of luck helped propel the piece to completion: The Vermont Community Foundation awarded O'Hallisey a grant, and Decker called to ask if she had any new pieces to perform.

The final movement of "Women of Aeronautics," of which Seven Days got an advance listen, is both straightforward and moving. Titled "I Touch the Future," it repeats the slowly descending notes of a chord while photographs of one undeniably brave woman after another appear on the screen.

O'Hallisey took the movement's title from a quote by Christa McAuliffe, the New Hampshire teacher who died in the Challenger space shuttle crash while her students — and students around the nation — watched on television. "I touch the future. I teach," McAuliffe famously said.

"I get choked up every time I say it," O'Hallisey said.

Premiere of "Women of Aeronautics" by Danielle O'Hallisey, performed by TURNmusic, Sunday, October 2, 7 p.m., at the BCA Center in Burlington. $20 suggested donation. turnmusic.org