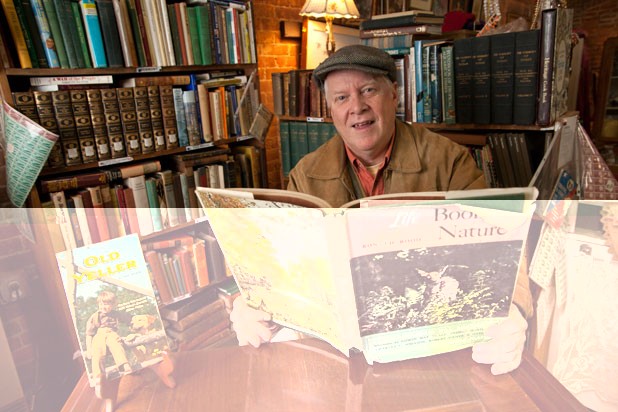 Doug Dows is a man of hobbies. He plays pool, he has driven across the country visiting small museums in small towns, he works on his old farmhouse in Panton, and, lately, he has been spending much of his time buying large boxes of books at auctions and sorting through them, looking for old volumes on Vermont history.

At first blush, it’s confounding that a Philadelphia native would have such an interest in the history of this state. Dows, now 61, came to attend graduate school at the University of Vermont in 1975 and “had every intention of leaving, but never did,” he says. What happened? Well, he fell in love.

He had fallen for the physical beauty of Vermont several years earlier, while working at a boys camp in Salisbury. But it was in graduate school that, Dows says, he grew to love the people of the state, too. “It’s the independence streak in Vermonters,” he explains. “The fact that they’ll think for themselves. And their closeness to the Earth.”

When he graduated, Dows and his wife moved to Panton. He spent 22 years working for the Department of Education, rising through the ranks to become director of the Safe and Healthy Schools programs.

Dows is now retired, but he’s nothing if not busy. In addition to playing pool with the state championship team, he crisscrosses the state, sits in on auctions and buys literally tons of books — generally for $2 to $5 a box. Book dealers across Vermont market them online and split the profits with him.

Seven Days caught up with Dows — who might be the most independent of Vermont’s independent booksellers — at a café near Vintage Inspired Lifestyle Market in Burlington, where he has been selling some of his vast collection.

SEVEN DAYS: Where did your love of books come from?

DOUG DOWS: You know, my own family genealogy has been written, and I have a relative who collected books back in the 1800s; he gifted 40,000 volumes to a library in Massachusetts. So it’s in my blood.

SD: And this particular interest in Vermont history — how did that start?

DD: I always enjoyed it. I’m a lifetime member of the Vermont Historical Society. But it really started nine years ago. I was at an auction of some older people’s farmhouse contents, and, in the barn — their grandchildren had divorced and left all their belongings there. I bought the entire contents of the barn and ended up with several boxes of books. I was talking with someone who said, “You know, if you take them to a used-book dealer, they’ll give you money for them.” So that was really the beginning of this book adventure.

SD: What’s the most valuable thing you’ve ever found?

DD: Well, something just happened recently that’s never happened to me before. People often ask me, “Have you ever found anything in the book?” And I never have until just this past month. I found money! I got a book, and I was going through it to price it, and there was a card there. I opened the card, and there was a $50 bill. It was sad, though — it was a sympathy card.

The most valuable book that I’ve found is — well, I bought a box of foreign-language books at an auction in Bridport. The auctioneer knew I collected books, and I said, “Oh, I’ll buy them for $2.” A few days later, I drove through Whiting, Vermont. There’s a small bookstore there called Bulwagga Books [& Gallery], and I know the owner. I took the box in and said, “I don’t know if you’re interested in these; they’re foreign language.” And he said, “Sure I’ll take a look.” He found eight books in German on Nietzsche and offered me $50 for them. So I said, “Wow, maybe I better go look these up.” I went back, pulled one book out of the box — it was a 19th-century leather-bound book, in French, by an author named Marcel — and it turned out it was worth $1000. Just the one book! And I had paid $2 for the whole box.

SD: Have you ever come across a book you couldn’t part with?

DD: That’s happened twice. I’ve found books that were the first I ever read, you know, as a kid. One was a thing called Dog Stories. I got the book in a box, and I recognized it immediately. And another one was — well, remember when you used to order books from Scholastic when you were in school? This one was called Skeleton Cave. So you know, you have that experience where you recognize it immediately, and it takes you right back to when you were 8 or 9 years old. So I still have those.

SD: How do you think the used-book market has changed over the years?

DD: One of the booksellers I know doesn’t have a storefront anymore — he’s strictly online now. In the bad economic times, being able to sell a book online has really made a difference. It’s really made it possible to keep doing this.

But as far as Kindle and Nook and e-books — I think some people just like to have the book in their hands. In some ways, you could say the actual book might become more valuable because there’ll be less and less of them. I mean, the whole thing in hobbies is “How scarce is it?” And there’s not going to be a lot of books around anymore. So the ones that are around, if you can keep them in good shape, I think they’re actually going to be more valuable.