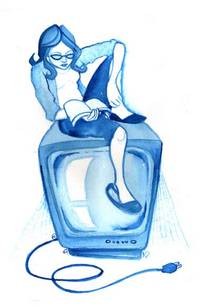 I have a confession: I don’t like watching TV. The boob tube has the potential to suck me in completely, and since there are so many other things I want to make time for, I figure I just can’t afford to turn it on. Saying this now feels like a betrayal of my childhood, though. As a kid, I used to bathe in cartoon-conveying cathode rays at every opportunity — meaning, whenever my family visited a relative with cable. My brother and I grew up on a peripatetic visual diet of PBS, not because of any holier-than-thou media theories on our parents’ part, but because the local New Hampshire station’s weak signal was usually the only one our Northeast Kingdom set could pick up.

Now, aside from an abiding fondness for “Dr. Who” reruns and nature documentaries with deep-voiced narrators, I can’t stand the stuff, particularly its ubiquitous presence in public places. (Regular patrons of laundromats, bars and medical clinics, beware.) So I was surprised to get a mid-May phone call from Nielsen Media Research, Inc., the company that has been tracking TV viewing since the industry began in the 1950s, and now offers ratings for more than 40 countries.

The lady on the line asked if my household would agree to complete a survey during a “sweeps week,” one of four periods per year when advertisers pay to find out who is watching what, and when and where, so they can allocate their commercial spending loot accordingly. I hesitated, saying that I had a TV but never watched it — the last time I’d plugged it in had been for a cheesy holiday-party viewing of White Christmas. But the persuasive rep said that was OK, and mentioned a thank-you stipend. Since my phone number is listed under the moniker of a faux detective movie character, I hemmed and hawed for a bit, but greed eventually won out over privacy concerns. I gave her my real name, thinking it would be hard to cash a check made out to Mr. Rollo Tomassi.

I needn’t have worried. A week later, a Priority Mail packet arrived addressed to “The Dewald Home,” with a TV diary booklet and a letter thanking my husband and me for being a “Nielsen family.” Also inside were two crisp bills totaling $30, so new and flat it seemed they’d been ironed. A bit weirded out by receiving cash in the mail from an institution, I pocketed the dough and flipped through the booklet. With the exception of a website address on its cover for users with questions, the diary looked like it hadn’t been redesigned since 1972. The TV icon on its cover had square edges so sharp they looked dangerous.

I was to fill out the initial survey about household size, ages and cable or satellite access, then keep a daily log of anything we watched, recording the show’s channel number or station call letters under the grid that corresponded to the exact hour. That part would be easy. I’d just draw an X through each day, noting we hadn’t watched anything. Apparently, that’s OK with the Nielsen powers that be: If you have a TV screen in your house, they want to know how it’s being used, even if it’s not.

Some homes get “set meters,” little devices that connect a TV to a phone line to track the power switch and channel changes, sending the info to Nielsen HQ automatically at the end of each day. But lots of booklets are mailed, too, and thus pen-and-paper jottings and consumer honesty let the commercial producers know how to most effectively sell stuff. In addition to the almost patriotic attitude the Nielsen reps try to inspire about the job’s importance, a $10-to-$30 bribe is thrown in to inspire conscientious recordkeeping and timely return of the booklet in a postage-paid envelope.

Curiously, Nielsen, Inc. wants to know if you rent a VHS tape or a DVD and watch it on your TV, and they’re just starting to track usage of TiVo and similar “digital video recorders,” which are wreaking havoc with advertisers’ marketing plans because such devices allow viewers to skip commercials entirely. But they don’t care if you usually consume media via a computer — DVDs rented or purchased and watched on a screen, or YouTube and video blog segments downloaded from the Internet. That’s the demographic my husband and I happily inhabit. Despite our shared TV aversion, we’re not audiovisual teetotalers: We have a Netflix account, and gladly patronize our local DVD rental place for spur-of-the-moment movie nights.

If there’s news we need to know, we usually find it online. You’d think advertisers would want to know that, but it’s not part of the survey. The only spot for me to mention it was in a brief “comments” section on the TV diary’s last page, which I filled with a mini-essay in tiny script. I had to do something to earn that 30 bucks.

At the end of the Nielsen week, we sold our TV. We’d been meaning to for a while — at 28 inches, its black bulk took up a lot of space in our bedroom, and I was tired of looking at its huge, heavy, dead eye. A group yard sale with friends presented an excellent opportunity — or so we thought. We’d just finished laying out all of our stuff when it started to rain. A woman came by as we were throwing a tarp over our humungous set, and we were glad to have her cart it away for $15, working DVD player included.

So, apologies to all you regular viewers out there. If “Studio 60” finally gets cancelled next season, you’ll have at least one scapegoat. But look on the bright side: With any luck, in a year or so you’ll be able to rent a DVD of past episodes, à la “Arrested Development.” How you watch it is your business.