Trying Out a Draft and Craft Night in Winooski 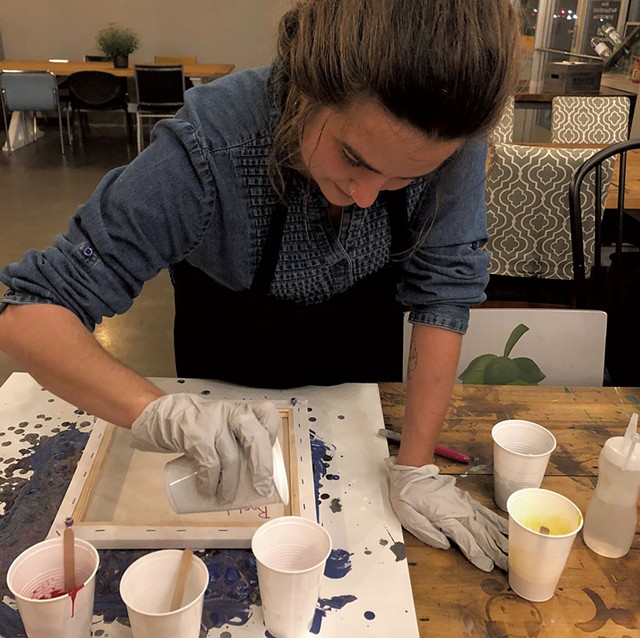 When Drafts N Crafts popped up in Winooski this spring, however, it gave me pause. Paying $20 or $30 to drink wine and paint the same sunset (or snowy tree or bird or lighthouse) as everyone else in the room was, to me, akin to getting poked in the eye with a sharp stick. But paying to drink beer surrounded by craft supplies? That somehow seemed different. And extremely appealing.

If my snobbery about Paint Nite could be so swiftly undone with a slight tweak of circumstances, was I a miserable hypocrite? Were my nearly 30 years taking a larger toll than I had thought? Was everything a lie?

After months of feeling low-level existential angst every time I entered the Winooski traffic circle — Drafts N Crafts occupies the former site of ill-fated gay bar Mister Sister — I finally had the chance to prod the bear. On the evening of September 12, with two good-sport girlfriends (let's call them F1 and F2) by my side, I crossed the threshold into the realm of commodified creativity.

At 7:30 p.m., we were the only customers save two young women posted at the bar beneath a gigantic American flag. They left shortly after we arrived, and no one else replaced them.

We took a seat at one of the long, paint-spattered wooden tables, surrounded by samples of projects hanging on the wall and on windowsills: Vermont rendered in green string, intricate quilled paper birdies, abstract canvases of swirling paint.

Steve Roberge, who runs Drafts N Crafts with his sister, Amy Pelkey, swiftly brought us menus — for drinks and crafts. "We're out of the bird house," he informed us apologetically.

Eager for inspiration, we ordered our drinks — a Switchback for me, Chardonnay for F1 and F2 — and set to flipping through the three-ring binder of potential projects. (Note: Crafting isn't obligatory at Drafts N Crafts; less interested parties are welcome to simply toss back a few at the bar.)

The options were many: a cork keychain ($8) and a "fairy jar" ($10) were on the low end of the price spectrum, while a six-pack tote with opener was on the higher end at $42. A wall-mounted bottle opener cost $38, with optional stencils of phrases such as "Go ahead, take your top off" and "Let's get ready to stumble."

"The opener is tempting to me, because that seems like a nice thing to have in your house," F1 commented.

In the end, F1 opted for making a string-art flower at $25. F2 picked the fairy jar (a "plain-Jane" project, according to Pelkey). I went for the $25 fluid acrylic painting ("really fun; you need no creativity," assured Pelkey). Along with our craft selections, we ordered another round of drinks and a couple of grilled cheese sandwiches. Oozing delicious orange American cheese, the craft-time staple was the bar's only food option and absolutely hit the spot.

Lubricated and ready to rumble (or stumble), we began to make messes, accompanied by the sweet Winooski soundtrack of incoming aircraft. With written instructions supplied by Pelkey, F1 donned an apron and set to work staining her wooden string-art panel. F2 hit the Mod Podge and silver glitter, transforming her mason jar into a sparkly enclosure for a pre-cut paper Tinker Bell-esque silhouette. As we worked, Pelkey whisked away dirty brushes and other detritus; cleanup is part of the Drafts N Crafts experience.

Pelkey pointed me toward a bevy of paint colors, recommending I choose four to six for my masterpiece. Overwhelmed by the options, I went with a Mondrian palette of red, yellow, blue, black and white. I squirted small amounts of each into plastic cups, and Pelkey walked me through the chemical cocktail necessary for the project. Once that was prepared, I poured each color into a single cup, where they all mixed and mingled in ways impossible to replicate.

Anticipation mounting, I pressed the canvas to the cup, took a deep breath and flipped both over. A small thread of black paint trickled out before I lifted the cup entirely, unleashing a glorious, burping, oil-spill-esque bog of color across the white surface. Pelkey pantomimed how gently to tilt and shift the canvas to spread the paint evenly; each movement brought forth some new fractal or texture, a foreign landscape revealing itself in real time. I was in love.

And then it was over. Marveling at my creation, I was brought back to the moment by F1's steady hammering as a flower of nails took shape on her wooden panel. "I feel like I'm working, and it's great," she said. "This is actually incredibly satisfying."

In a poetic twist, Roberge told me that Paint Niters have been known to bring their works to Drafts N Crafts for the fluid acrylic treatment, erasing failed figurative art experiments with abstract ones. "We give them a few dollars off," he said.

As F1 worked steadily to wrap string around her nail-flower, the bar's 9 p.m. closing time drew near. Though Roberge confessed he was tired (he has a day job, too), he and Pelkey were gracious enough to allow us to stay a bit longer; this evidently wasn't the first time a customer's craft project had kept them late.

F1, F2 and I lined up our finished pieces for a photo, paid our bills and exited into the Winooski night, a little tipsy and — to be absolutely honest — rather pleased with ourselves.

The original print version of this article was headlined "Public Art: Trying Out a Craft and a Draft in Winooski"