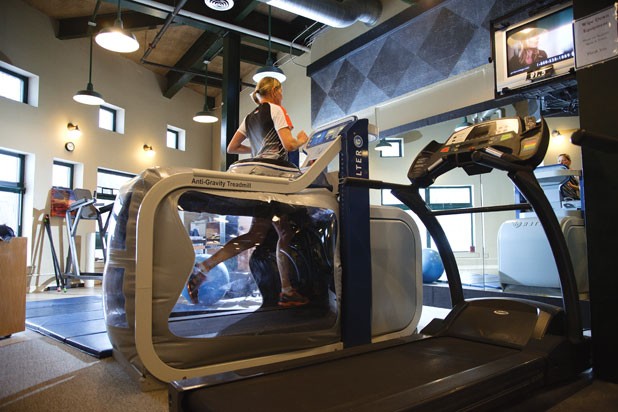 Pity the poor treadmill, the Rodney Dangerfield of fitness equipment. No matter how many bells, whistles, televisions, lights, heart-rate trackers and automated interval programs companies add, the machine still gets no respect from exercisers who’d rather lick sweat off the gym floors than log a few miles on the rubber road to nowhere.

But what if there were a treadmill that could lift you off your feet, make you feel weightless, heal your injuries and even deliver long-lost happiness? What if a treadmill could simultaneously change the way an elite athlete trains, increase the freedom of a person with a disability, and help an aging population stay healthy without the risk of falling?

Such a machine exists, and not in a Willy Wonka workout world. The AlterG antigravity treadmill has landed in Burlington at On Track Health & Fitness, one of only two places in Vermont known to boast the brand-new technology. (The other is Bennington’s Chiro-Med & Rehab.) “The machine puts a smile on the face of anyone who tries it,” says Brad Stephenson, 41, a Burlington attorney and On Track client who helped bring the AlterG to the Queen City. “It has the potential to revolutionize exercise as aging baby boomers look for ways to keep moving.”

What’s an antigravity treadmill? It’s a little bit of rocket science. More than 20 years ago, California doctors designing exercise programs for NASA astronauts developed a running machine that sucked air out of a chamber to create artificial gravity. AlterG, founded in 2005, took this differential air-pressure technology and reversed it to counteract gravity, testing prototypes with elite coaches and runners at the Nike Oregon Project. Immediately, trainers and physical therapists could see that the partial weight-bearing training on such a machine beat underwater running for reducing impact on joints and providing a cardiovascular workout.

“In water running, you’re pushing through the resistance in the water, so it’s very different mechanics,” explains On Track founder and physical therapist Brian Loeffler, just before a demo of the AlterG. “It’s the mechanics of running; it’s exactly the same, you’re just reducing the impact.”

It’s easy to spot the AlterG in the row of treadmills at On Track: the only machine with a plastic bubble around the sides and back. “If you were to imagine what it would feel like to run on the moon, that’s what it feels like,” promises Loeffler, who decided to invest $30,000 in an AlterG after Stephenson mentioned the new technology and Loeffler tried out a demo that the company trucked in. “I got on it and ran for about three minutes and said, ‘I gotta have this thing.’ It’s absolutely amazing,” he says.

Stephenson had tried the AlterG in San Antonio, Texas, where he lived before relocating to Burlington. “I was a little apprehensive about it but wanted to give it a try,” says Stephenson, whose muscular dystrophy has weakened his quadriceps, resulting in falls and multiple broken bones. “The AlterG allows me to walk or run in a protected way. It allows me to unweight my body so that I can walk faster than I could.”

For the first time in 24 years, Stephenson can run.

The AlterG’s gravity-reduction mechanism is silly looking: a pair of modified bike shorts with a collar that zips into the plastic bubble to create an air chamber. “My kids called them the Humpty-Dumpty pants,” Stephenson says. “But once you get over that, no problem.”

At On Track, I’m relieved that there are few witnesses to see me wrangle the shorts over my True Religions as I give the AlterG a test spin. “Yeah, it’s not the most flattering,” Loeffler says.

Soon, however, I instantly lose five pounds, then 10, then 15, as he zips me into the air chamber and adjusts the control so that I’m gently lifted and running at a percentage of my body weight. My feet are still moving along the belt, but with far less effort. I can see how elite athletes use the antigravity treadmill to work on their fast-twitch muscles without the potentially traumatic impact of repeated intervals or high mileage. “It helps athletes to maintain their sanity so they can still work out and get that sweat going,” says Loeffler, “and at the same time allow that injury to heal.”

The pain that I occasionally feel in my left hip has disappeared, which, as Loeffler explains, can improve my running form. Clients who’ve undergone surgery that limits their lower-body movements can safely get on the AlterG and move without limping. “It helps them fire the muscles in the correct pattern,” Loeffler says. “We’re seeing incredibly fast rehab times from people coming back from surgeries.”

One patient, Loeffler says, had been immobilized for six weeks by foot surgery. “By the time she came in, she couldn’t walk on that foot,” he says. “With the AlterG, we were able to get her started at 30 percent of her body weight so that she could walk without pain and restore that natural toe-heel gait, so that if she walked in here now, you wouldn’t be able to tell there was anything wrong with her toe.”

The AlterG certainly has its drawbacks, beyond the eye-popping price tag. As on other treadmills, you’re still staring at a wall or a mirror instead of soaking up the scenery on a run outdoors. And, because the antigravity treadmill reduces your body weight, it also reduces the number of calories that you burn in a workout. Still, the feeling of floating through space sure beats sitting on a couch recovering from injury.

An eloquent witness to that feeling is Winooski’s Courtney Blasius, who suffered cardiac arrest and an anoxic brain injury in 2007 and has spent the past six years regaining her mobility and speech. Though the 28-year-old still has trouble walking, on the AlterG at On Track, she runs, gliding like a gazelle. Her physical therapist, Raymon Webster, says the treadmill offers enough security for Blasius to run for 90 minutes at a time without losing her footing. “Her pace every time is a little bit higher,” he says.

“Having been a runner before, I wanted to get back into it,” Blasius says. “This helps me to extend my legs. I love that. It also helps me with my balance, the security; I’m zipped in. It’s helped me to become more comfortable. I love that.”

For more info on the AlterG, contact On Track at 865-2226 or visit ontrackhealth.net.

The print version of this article was headlined "The Fastest Way to Lose Five Pounds".