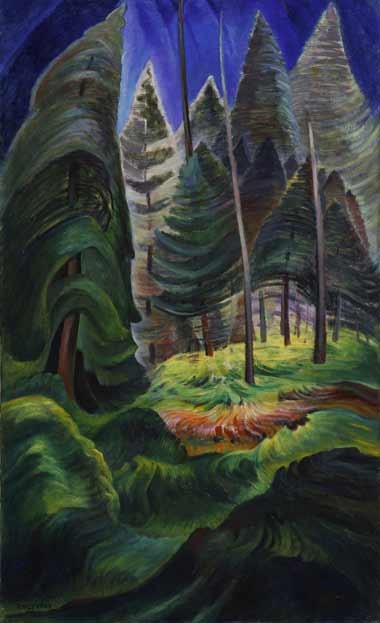 There's a book listed on Amazon.com entitled Carr, O'Keeffe, Kahlo: Places of Their Own. Author Sharyn Rohlfsen Udall notes that all three artists "demonstrate a special connectedness to place," but that's not the main reason they're thrown together. Through popular prints and posters, Emily Carr (1871-1945), Georgia O'Keeffe (1887-1986), and Frida Kahlo (1907-1954) have become the best-known female artists of the 20th century. Hence the Canadian's, American's and Mexican's names are sometimes spoken in the same breath.

Carr is the least famous of the three. Her paintings are nonetheless often as refined as O'Keeffe's and as psychologically complex as Kahlo's. Given that vitality, "Emily Carr: New Perspectives on a Canadian Icon," appearing at the Montréal Museum of Fine Arts through September 23, is a show Vermonters should brave the border to catch. The artist is slowly but surely becoming more than a Canadian icon.

Carr was born on a prosperous farm in Victoria, British Columbia, in 1871. She was the second youngest of five siblings, and the one most interested in making pictures. The show offers more than 200 of Carr's works, defining three distinct phases of her career. It also traces her life's trajectory, which is nearly as inspiring as the works themselves.

After early studies in San Francisco and England, Carr embarked on a private teaching career. She had first sketched native subjects on Vancouver Island in 1898; after a cruise to Alaska in 1907, she focused even more intently on documentation. At the time, many perceived that "First Nations" art was quickly vanishing from the coastal rainforest region. Carr began recording native forms and designs with watercolors, journeying to numerous villages in the process. "Totem Walk at Sitka" of 1907 is a highly competent, 15-inch-square watercolor on paper that describes a shady path with totem poles along the right. A canopy of spruce trees overhangs the walkway.

Other watercolors from this period include caricatures and cartoons about teaching, plus a pair of striking forest interiors, both about 28 by 21 inches, that presage her mystical canvasses of the 1930s. The 1909-10 forest watercolors were composed with darkened foregrounds and light streaming into their middle depths. The giant conifer's verticals appear to be sculpted by nature, just as human hands sculpt expressive totem poles.

A second European trip in 1910-11, this time to France at the height of Fauvism, was directly responsible for Carr becoming an "icon." She became a solid, Fauve-influenced oil painter, introducing vibrant colors to her formerly simplified depictions of totem poles and potlatch houses. Her oils began to break hues into distinct patches of color, and Carr adopted the use of directional strokes in works such as the 19-by-25-inch oil, "Autumn in France," a golden pastoral landscape with a mountain in the distance. "Trees in France" is a 14-by-18-inch oil on canvas that focuses on the fat trunks of three deciduous trees, which stretch their limbs like ballet dancers.

Upon returning to Canada, Carr added vivid oil paintings to her studies of native life. The 24-by-12-inch oil "Kispiox" of 1912 is an aggregation of totem poles weathered into whiteness and engulfed by a landscape of lavender and chartreuse and a sky in shades of blue. "Skidegate (shark pole)" is a vertically composed, 26-by-14-inch rising composition emphasizing verticality - another harbinger of her later images.

In 1913, an exhibition of 200 of Carr's drawings and paintings was mounted in Vancouver. On its strength, she petitioned the Minister of Education for British Columbia to finance further trips around the province. Ironically, her growing power as a painter doomed her ethnographic ambitions. Carr's application was roundly rejected, and Minister E.H. Young made it clear that he deemed modernist-influenced art inappropriate for depicting aboriginal artifacts.

The second phase of Carr's story began with that bitter disappointment. Students also began to reject her Fauvism, and financial destitution followed. As Carr advanced into her forties, her output as a painter significantly decreased; she earned her living by running a small rooming house and crafting faux Indian ceramics and rugs to sell to tourists. She later wrote, "I ornamented my pottery with Indian designs - that was why the tourists bought it. I hated myself for prostituting Indian Art; our Indians did not 'pot.' Their designs were not intended to ornament clay . . ."

Still, Carr's paintings were occasionally shown. On a visit to her small studio in 1927, Eric Brown, director of the National Gallery of Canada, invited her to participate in the "Exhibition of Canadian West Coast Art: Native and Modern" being organized for the National Gallery in Ottawa. The ethnographer who was also designing the show became so enamored of the paintings by Carr, then in her late fifties, that he reshaped the exhibition so her work was predominate. Twenty-six of her paintings were selected.

That 1927 exhibition has been totally recreated presently in Montréal, and it's easy to see why it won Carr national recognition. Her boldest 1912 canvasses, such as the 28-by-38-inch "Indian War Canoe" and the stunning evening silhouette of a totem gate in the 30-by-20-inch "Graveyard Entrance, Campbell River," moved eastern audiences in a way that would have mystified her detractor, Minister Young.

On the way to attend the Ottawa opening of her 1927 show, Carr stopped in Toronto to meet several artists in the so-called "Group of Seven." That distinguished Toronto-based circle had consciously banded together to define "the soul of Canadian painting" as having a spiritual connection to the land. Carr had similar interests. Lawren Harris, the most spiritual of the group, became her lifelong friend and correspondent. As a result of his influence and her own interest in theosophy, Carr entered the third and most important phase of her career: perusing transcendental themes in the towering landscape of British Columbia.

"Rushing Sea of Under-growth" from 1935 typifies her most celebrated style. The 44-by-28-inch vertical stand of sweeping conifers was rendered with legato cross-contour brush strokes. As in earlier watercolors, darks frame the foreground and light seeps into the forest depths. In the similarly scaled "Light Swooping Through," the woods dissolve into a symphony of rolling folds. Carr's paint handling is often quite lean, yet she warmly layers her material into substantiality.

After Carr's death in 1945, a memorial exhibition curated by Harris opened in Toronto. A large segment of the Montréal show is based on Harris' Toronto presentation. He placed Carr's work squarely within a context of expressively spiritual modernism. Another section of the current Montréal exhibition delves into photographs and paintings reflecting her environmental concerns.

Just as it was 80 years ago, the amorphous identity of Canadian painting remains a fascinating topic of discussion. It deserves to be debated on both sides of the 49th parallel. Whatever the soul of Canadian painting may be, it's unquestionably vibrant. Understanding Carr, the Group of Seven and their Québec contemporaries could make Vermont painters ask if their own cultural identity has a "soul" and, if so, what it looks like.