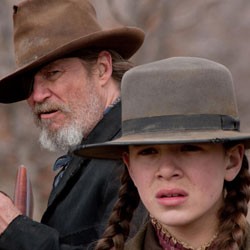 It goes without saying that Joel and Ethan Coen’s update of the 1969 western that earned John Wayne his solitary Oscar represents a departure in approach, interpretation and tone. On the surface, Charles Portis’ 1968 novel would seem ripe for the brothers’ patented plucking. Yet, while they make a movie more suited to our time, the Coens haven’t quite made one likely to outlast it. Confoundingly, the book’s dark humor continues to elude attempts at screen adaptation.

The film has its share of nice touches, yet it fails to rank with the brothers’ top-notch stuff. Not that the Coens haven’t assembled an A-team on all fronts. Cinematographer Roger Deakins is a high priest of his profession and, after so many collaborations, can probably pretty much read the fraternal filmmakers’ minds. He does sublime work here. True Grit is something to see, even if not every minute is worth watching.

Likewise, Carter Burwell’s score is a thing of transcendent, evocative beauty. The heavily styled dialogue, as adapted by the brothers, preserves Portis’ odd formality (in the 1870s, the contraction evidently had yet to be invented). But, again, it mysteriously drains all but trace elements of the author’s wry wit.

Then there’s the cast, several members of which have appeared in previous Coen productions. The performances they give this time around pale beside their past work.

Jeff Bridges’ iconic Dude, for example, is in no danger of being eclipsed by his capable but familiar Rooster Cogburn. The actor plays the irascible lawman and drunkard essentially as an older, grumpier version of the country singer and drunkard Bad Blake, his Oscar-winning role in last year’s Crazy Heart. Newcomer Hailee Steinfeld more than holds her own as Mattie Ross, the Arkansas 14-year-old who hires Cogburn to bring her father’s murderer to justice.

Accompanying the pair on their perilous trek through Choctaw territory is a Texas Ranger named LaBoeuf, played by Matt Damon. The actor is game and does his darnedest to embody the character the Coens want as a foil to Cogburn. The problem is, they seem to have been unable to make up their minds about just what sort of character that is. One minute LaBoeuf is spying on the young girl as she sleeps and pervily speaking of “stealing a kiss.” The next, he’s the Dudley Do-Right of the bunch, singing the praises of his carbine and spouting the Ranger motto like a tumbleweed Boy Scout.

Their manhunt has its high points, including a run-in with cohorts of their quarry and a shoot-out with a notorious gang. (Barry Pepper plays its leader and, I swear, looks like he’s had plastic surgery to turn him into Harry Dean Stanton. It’s a good look for him.) These scenes are Wild West fun, but hardly classic movie moments.

That’s the thing about True Grit. Compare it with a Coen masterpiece like No Country for Old Men and you’ll see what I mean: There’s more suspense, mystery and poetry in the scene where Javier Bardem flips a coin and orders the gas station owner to “call it” than in this entire picture. Great care clearly went into its making. Great cinema simply proved beyond its makers’ grasp.

I am customarily pleased as punch to watch Josh Brolin at work, but he, too, has been far finer in front of the Coens’ camera. His Tom Chaney — the killer whose entrance comes some 80-plus minutes into the picture — is a generic frontier miscreant so sketchily conceived that the viewer is unlikely to feel much invested in the character’s fate. The film’s final moments border on the anticlimactic.

Good guys, bad guys — ultimately, they’re all merely footnotes in the sprawling volume of the brothers’ filmography. It required a degree of artistic grit to remake a chestnut as beloved as this one, and the Coens gave it a hell of a shot. In this case, unfortunately, their aim wasn’t true.