Trout River Brewing Hops to It in Springfield 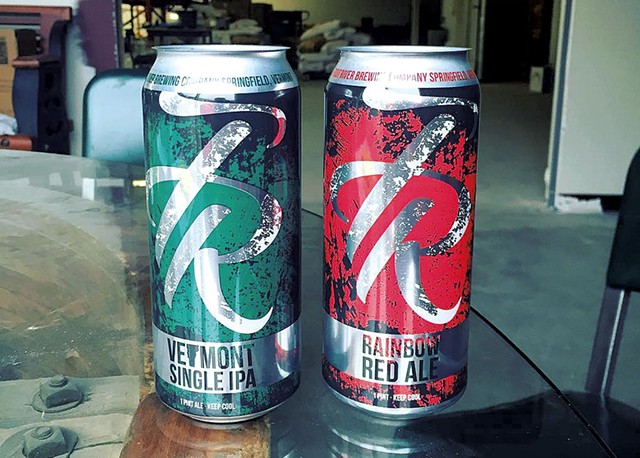 Founded in 1996, Trout River Brewing was part of Vermont's first wave of craft breweries. For years, the Lyndonville brewery was the Northeast Kingdom's sole outlet for fresh, local suds. Over the years, owner Dan Gates grew the operation and added a pizzeria; locals would crowd into the pub several nights a week for pies and brews.

In fall 2014, Gates sold the business to a few young 'uns from southern Vermont. The former brewer got busy in East Burke — where his Foggy Goggle Osteria opened in September 2015 — but, for the longest time, no one heard a peep from Trout River.

That's about to change. This week, the brewery — now located in Springfield — will release its first run of cans under new ownership.

Those cans (four-packs, 16 ounces) include one old favorite — the mid-malty, slightly fruity Rainbow Red Ale from Gates' recipe stash — and a new brew called Vermont Single IPA. The IPA is made with pale and wheat malts and blended hops. At 5.6 percent ABV, "it's a little cloudy," broadly floral and a tad fruity, says Trout River co-owner Kelen Beardsley.

Like company co-owners Trevor Billings and Gabe Streeter, Beardsley is a Springfield native; the longtime friends have been homebrewing together for years. Their brewery is located at 100 River Street, in an old gear factory on the Black River. Right now, it's just a production space, but this summer the owners plan to open a tasting room where they'll showcase seasonal brews such as a Bavarian hefeweizen.

For now, distribution will stay fairly local, Beardsley says. Find the beers at restaurants and retailers in central and southern Vermont (north to White River Junction), and in limited quantities statewide via Calmont Beverage. The brewers plan to hit up several summer festivals, including the Brattleboro Brewers Festival on May 14 and the Stowe Craft Brew Races on May 21.