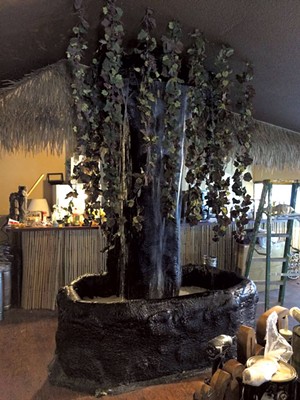 Just as the ice melts, a taste of the tropics is making its way to the Northeast Kingdom. This weekend, Chad Roy, owner of St. Johnsbury's Maplewood Lodge, will open the hotel's second restaurant — and it has a tropical theme.

Roy, a construction and restoration industry vet, purchased the long-shuttered lodge in January 2014 with the intention of renovating and flipping it. But when he finished fixing up the 22 rooms, he decided he liked the inn enough to keep it.

To bring in locals, Roy began using the lodge's kitchen to prepare take-out dinners, then opened a dining room beside the lobby. Last winter, his first full-fledged restaurant came to frozen life. The lodge's "ice lounge" recreates the sensation of being inside an igloo. A costumed polar bear greets snowmobilers who stop in for a hot wrap, a burger flavored with ghost-pepper cheese, or a cheesy pizza panino.

The ice lounge will remain open year-round, alongside the new, unnamed tropical restaurant. For that project, Roy has built a larger kitchen equipped for the chefs he's recruited from Puerto Rico. Though the menu isn't yet set in stone, Roy says seafood will be a focus, as will Caribbean chicken and meat dishes. "People want something different," he says.

What they can certainly expect is another all-out theme restaurant. Roy has created a thatched roof over the bar and "a giant waterfall" that pours from the ceiling. The polar bear will have company, too, in the form of a dirt-biking monkey. If that's not the way to welcome spring, we don't know what is.