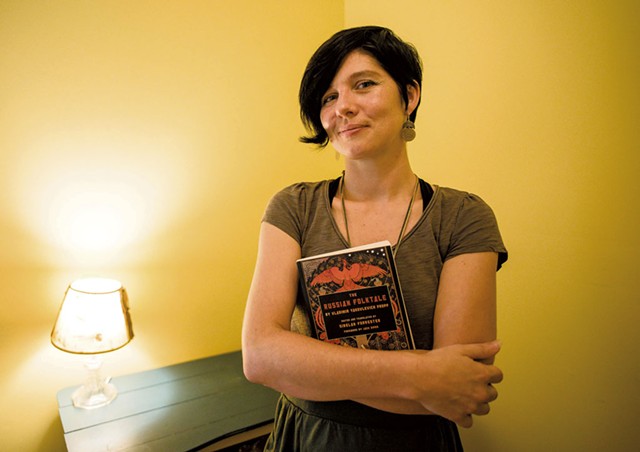 Deep in a forest, a young boy uncovers a shiny, jagged hunk of obsidian. A newborn fawn watches curiously as the boy stuffs it into his backpack. The fawn asks him why he's collecting such a sharp, heavy stone. The boy explains that gathering and carrying obsidian is a tradition among his people and quickly takes his leave.

So begins Eric Garza's tale. The Burlington resident is a lecturer at the University of Vermont Rubenstein School of Environment and Natural Resources, a consultant, and a podcaster. Last spring, Garza, 42, participated in the pilot edition of Parallel Narratives, a six-week course at the South End herb shop and healing center Railyard Apothecary.

The brainchild of Burlington performing artist and teacher Trish Denton, 37, Parallel Narratives merges traditions of folk storytelling and ensemble theater work with playful exercises in personal introspection. The objective is for participants to develop and share a fantastical version of their life story — that is, their own parallel narrative.

Like most folktales, Garza's story happens in an unspecified place and time and is filled with supernatural phenomena. But the experiences that inform it are real. At age 21, Garza attempted suicide and had a life-changing near-death experience. In his parallel narrative, the young boy collecting obsidian becomes brittle and deformed as he grows older, eventually shattering like glass under the weight of his burden — a metaphor for Garza's suicide attempt.

"It's good to have a metaphor in which to encapsulate something that is traumatic or dark," said Denton.

While some stories may take such grim turns, Parallel Narratives is not necessarily about probing one's most trying times. "The challenge isn't to bare yourself before us," Denton said.

Billed on Railyard's website as "self-direction through storytelling," the series offers a hybrid mode of understanding and sharing experience through oral narrative, with Denton as creative facilitator. As she put it, "I know quite a bit about how to be a symbol-reading, folktale-telling, surreal creative being — want to try that on for a minute?"

Six participants joined Denton for last spring's inaugural session, which was co-led by Burlington therapist Pamela Formica for this session only. Five others to date have worked with Denton privately.

The process begins with telling — not writing — a condensed version of one's life story. Participants are also asked to recall and share several stories that have been meaningful to them in some way. "It could be a fairy tale, or it could be a biographical bit about Teddy Roosevelt that stayed with you," Denton suggested.

Using notes from early sessions, Denton then takes to her books and the internet to compile an in-depth, customized packet of resources for each person. She estimated that each packet takes her about five hours to compile. She divides her findings into six sections: themes gleaned from the participant's shared narratives; helpers or guardians; talismans (significant symbolic objects); turning points; puzzle solving; and overall motifs.

Reviewing Denton's research, participants are then invited to consider what does or doesn't resonate with them and which elements, if any, they might like to integrate into their parallel narrative. Denton described this as a mashup process, an intuitive mixing of personal history with myth and metaphor, both pre-existing and invented.

"I know quite a bit about how to be a symbol-reading,folktale-telling,surreal creative being." Trish Denton tweet this

"I took all these scattered things and then mashed them with this rough outline," said Leslie Ruster, 33, a Montpelier herbalist and live-storytelling aficionado who worked with Denton as a private client earlier this year. Some key components of Ruster's final narrative are the mythical Irish selkies — reflecting her Irish ancestry — and the ax, a tool for which she feels a special affinity.

"It was super fun, and also sad — just a really profound process for me," Ruster said.

Denton complements this shaping and honing of the participants' stories with a program of "wordsmithing, analysis, imagination and metaphor exercises," she explained, drawn from her substantial repertoire of theater and storytelling experience. The idea, she said, is to get participants "comfortable with candidness and collaboration and their own brand of creativity."

The work culminates in a private group event where all participants tell the new versions of their life stories, this time inflected with a hearty dose of metaphor and magic realism. It's crucial, Denton said, that the stories not be written down or rehearsed; following oral tradition is key.

"There's something about caring enough about a story to remember the general flow," Garza commented.

"It's powerful," Denton said. "Not everyone is used to talking about themselves and being listened to about their lives, [not] for even 10 minutes."

Meghan Dewald, a Burlington resident and former artistic collaborator of Denton's who was recently divorced, said Parallel Narratives gave her a welcome outlet for processing emotions she had pushed aside in favor of practicalities. She also found strength in the oral format. "The delivery method of presenting a story, in the moment, to a group of people who are paying attention to you felt like a supportive ritual that our society doesn't have a place for anymore," said Dewald. "Sort of like a rite of passage, almost."

Denton's path toward her uniquely intense work began early in life. "My family is a family of storytellers," she noted, recalling that her elementary teachers would make notes on her report card about "my creativity or my talking — every year, every section."

In 2008, Denton graduated from Goddard College with a bachelor's in cultural studies. She was a cohost of Burlington's bawdy Spielpalast Cabaret from 2009 to 2011, and in 2012 debuted her first full-length production, Orkestriska's Box, at the Black Box Theatre at Burlington's Main Street Landing Performing Arts Center.

Chong's approach of combining oral history and ethnographic interviewing techniques with creative performance had a major impact on Denton. Those influences bore fruit in 2013, when she directed a production of "Birth" at Main Street Landing Performing Arts Center. Written by Karen Brody, the performance is based on interviews with more than 100 American women about contemporary birthing experiences.

"'Birth' opened my world," Denton remembered. "[I thought,] Yes, this is the type of work that I want to be doing."

In 2014, Denton enrolled as a master's student in pedagogy and performance studies at Dartmouth College. There she worked with Eric Miller, a folklore scholar and director of the World Storytelling Institute in Chennai, India.

"I love the folkloric imagination," Denton said. "It's just accepted that the world is full of endless possibilities." Parallel Narratives, she added, blends her studies with Miller, her expertise in ensemble theater and her own artistic inclinations.

This summer, Denton had her second encounter with mentor Chong, studying at the Ping Chong + Company Summer Institute seven years after their initial meeting. The New York intensive, Denton said, "really kicked my ass — I cried every single day that I did it."

She described long days of workshopping in which students put themselves through the processes they were learning from Chong: how to ethically conduct interviews on deeply personal topics and to translate that material into a creative public production that is both compelling and sensitive.

Denton's approach in Parallel Narratives is "far more gentle than Ping Chong," she said, and her overall emphasis is not on crafting a polished final product. She described the culminating storytelling event as "sharing" rather than a "performance."

"Using the same tools [as Ping Chong] to psychologically prepare people for sharing a creative work that's so personal to them and that's not divorced from their real life," Denton said, "that's a process that I [will] be translating for Parallel Narratives."

With so much emotional content in the balance, observers might call the process therapeutic, but Denton emphasizes the difference between her work and "standard" forms of talk therapy.

"Parallel Narratives is not therapy," she said. "Yes, healing occurs when you take time to focus on yourself. We don't have that luxury a lot of the time. Using your own life story is a bold move, so it's going to shake things up."

To some, including Garza, Parallel Narratives appeals in part because it doesn't happen in a clinical setting. Garza has never had a constructive experience with traditional Western therapy, he said, citing his distaste for the hierarchical relationship between therapist and client.

"When you turn therapy into a commodity, it ratchets down what is possible," Garza observed. For him, Parallel Narratives is all about possibility. "The process invited me to look a lot more deeply [at myself] than I have ever done before, even with close friends," he said.

Ruster professed similar sentiments. "Sometimes facts are a poor avenue for truth telling, and myth can be a wild way of telling the truth," she said. "Making and listening to stories feels like a vital form of medicine. It's a practice of coming into coherency and telling my own story rather than letting the morass of our dominant culture tell my story for me."

"I'm continually grateful and surprised at how hungry people are for this work," Denton said. In alchemizing her own blend of disciplines, she seems to have struck a chord with some.

"Ultimately," Denton said, "the role of the artist-storyteller in a community should be seen as a powerful ally, no?"