TRIP Dance Company Builds Skills for Stage and Beyond 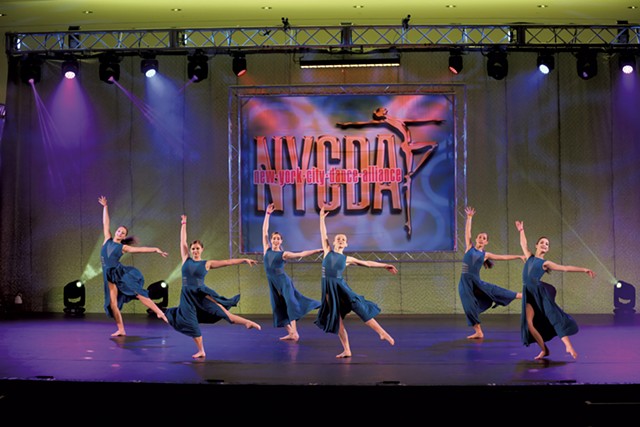 When young people are inspired, they can accomplish great things. For the past 18 years, Vermont's TRIP Dance Company has won numerous awards at regional competitions, and its graduates have become Broadway performers, ballet company members and high-level instructors.

This weekend, local audiences get to see what TRIP's current members — 35 dancers ages 9 to 18 from northern and central Vermont — have been up to. The company performs ballet, jazz, lyrical, modern, tap and hip-hop pieces at the Spruce Peak Performing Arts Center in Stowe on March 23 and 24.

TRIP (which stands for "technique, rehearse, implement, perform") is a nonprofit organization run by the Stowe Dance Academy and its Waitsfield satellite, the Mad River Dance Academy. The company regularly attends conventions such as the West Coast Dance Explosion and the New York City Dance Alliance, where dancers take workshops, compete and explore the dance world beyond Vermont.

Numerous former TRIP members have successful careers in dance. Liana Hunt has performed on Broadway in lead roles in Newsies The Musical, Wicked and Mamma Mia! Michaela DePrince dances with the Dutch National Ballet and is currently working on a biopic directed by Madonna. And Kate Stevens runs the modern dance program at Vermont Ballet Theater and School.

Proceeds from this weekend's performance will fund need-based scholarships for aspiring TRIP dancers. "Kids who want to do this we try to help the best we can," says Helena Sullivan, owner and artistic director of the Stowe and Mad River academies. "To some kids we might give a little bit more. We spend all the money. We hand it right back out."

For a backstage look at TRIP, Seven Days spoke with Sullivan and Julie Jatlow, secretary of TRIP's board of directors.

SEVEN DAYS: What was the original inspiration for TRIP?

HELENA SULLIVAN: I was traveling to New York City with six of the more serious kids [from the academy], and it was clear that they wanted more opportunity than what I could do here with ballet. Bringing them to New York would expose them to things that were a little bit more different, like hip-hop. They wanted to perform more, and that meant going to conventions.

SD: How are TRIP dancers selected?

HS: We have an audition in April. Some years, kids aren't ready to be in TRIP, so we have a development team — usually two to four girls — and they're in it for a year. They go to the conventions, take the classes and sometimes are understudies. In the following year, they join TRIP. I don't think I've ever said to someone, "Oh, no. You can't be in it."

SD: What are some awards TRIP has won lately, and why are they special?

JULIE JATLOW: The junior team at the NYCDA in Boston recently won the Class Act Award.

HS: You see a lot of dance now on television, like "So You Think You Can Dance." We got the Class Act Award for being age appropriate, music appropriate, costume appropriate — as opposed to young kids wearing seductive clothing.

We also got the Versatility Award. A lot of studios just bring only contemporary pieces, and others bring just hip-hop or tap pieces. We bring ballet, modern, jazz and musical theater pieces in all the age groups.

SD: I noticed that there aren't any boys in TRIP this year. Have any ever participated?

HS: Yes, I've had three boys in TRIP, but none in a while. Stowe is a small town, and it's very sports oriented. That doesn't leave a lot of room for kids to be interested in dance. I do The Nutcracker at the Flynn [Center for the Performing Arts] every year with the Albany Berkshire Ballet, and boys are part of that. We offer a boys' hip-hop class, and, as they get older, they get mixed into the girls' classes. So we normally have teenage boys in all the hip-hop classes, but not [often] in TRIP.

SD: What do you like most about running TRIP?

JJ: For me, it's empowering young girls to hopefully become leaders, not only in their communities [by mentoring younger TRIP dancers] but also later in life. I think TRIP gives them the opportunity to shine and to be passionate about something, to be committed. It also helps them with their athletic drive: They are dancing 10, 15 or more hours a week. And being part of this team environment is really powerful for young dancers.

HS: Dancers have such confidence. That's kind of what we teach: confidence, standing tall, looking people in the eye. Whether they're going to get a job as a dancer or not is kind of irrelevant. I feel like they are adults when they are 16, and they carry themselves well. I think they're going to be successful young women.